Alexei Navalny: What happened when he returned to Russia? 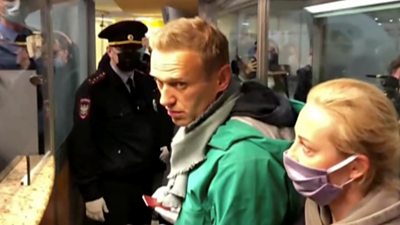 
Alexei Navalny, Russia’s opposition leader and a prominent critic of the Kremlin, has been

detained at a Moscow airport moments after he landed from Germany.

Mr Navalny, 44, was returning to Russia five months after he was nearly killed by a nerve agent attack, which he says President Vladimir Putin ordered. The Kremlin denies the allegation.

Video shows Mr Navalny saying goodbye to his wife Yulia, while his lawyers asks why they are not allowing her to join him. Mr Navalny is then taken away alone at Sheremetyevo airport.

In a statement Russia’s penitentiary service said Mr Navalny “had been wanted since 29 December 2020 for repeated violations of the probation period”.

Brazil authorizes Oxford/AstraZeneca and Coronavac vaccines for emergency use