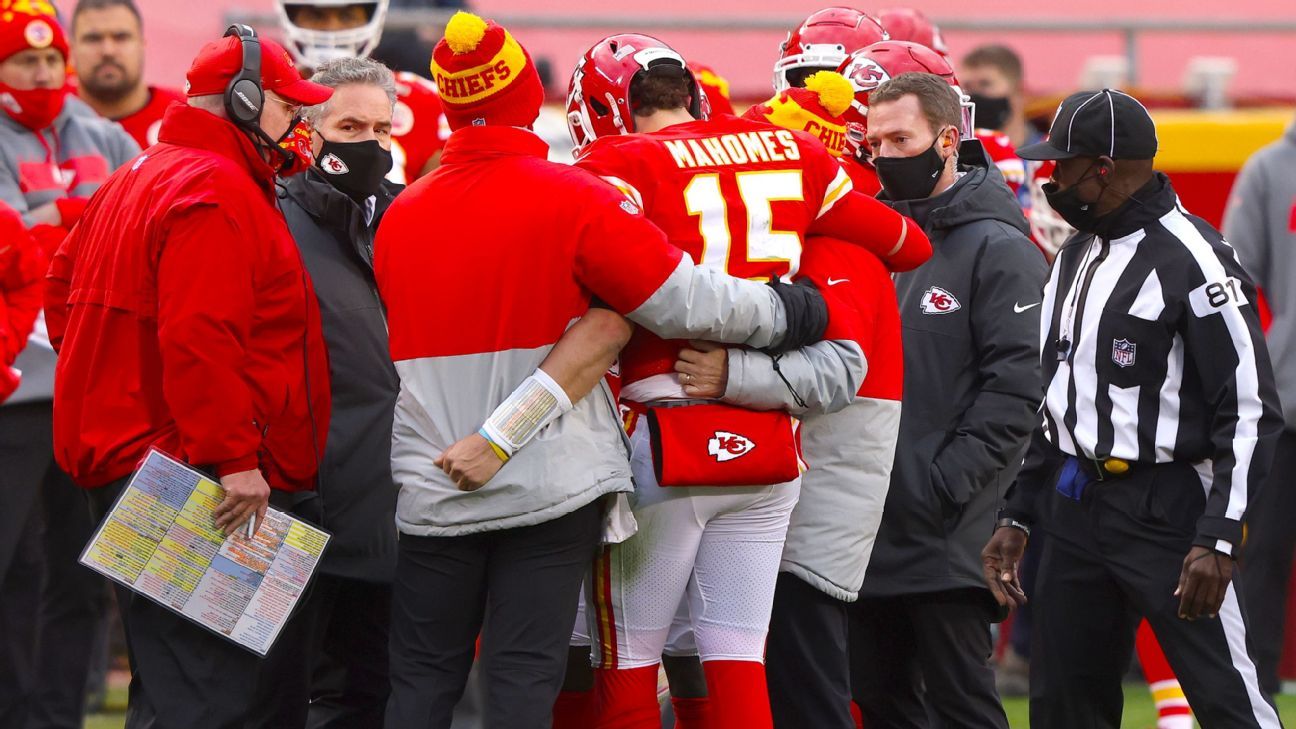 
KANSAS CITY, Mo. — The Kansas City Chiefs got two big plays from their quarterback near game’s end to preserve Sunday’s 22-17 divisional-round playoff victory over the Cleveland Browns, but that player wasn’t Patrick Mahomes.

With Mahomes in the locker room after suffering a concussion and being knocked out of the game, Chad Henne made two big plays to save the Chiefs. On the Chiefs’ final drive he scrambled 13 yards, ending with a dive to get to the first-down marker to set up a fourth-and-1 throw.

He completed a 5-yard pass to Tyreek Hill to allow the Chiefs to continue the drive and run out the clock.

“When you’re around him, you just know,” Reid said of why he trusted Henne, who hasn’t been a regular starter since 2014, when he was with the Jacksonville Jaguars. “Everybody has full confidence in him.

“I think we’ll all remember the run, that dive, and then the throw.”

Mahomes saluted his backup, tweeting “#HenneThingIsPossible” after the game.

Told by reporters that “#HenneThingIsPossible” was trending on social media, Henne said the only social media platform he uses is LinkedIn.

“But I don’t think #HenneGivenSunday or #HenneThingIsPossible is going to be on LinkedIn,” he said. “… Once I got in that huddle, everyone had confidence for me. They were pushing for me, had my back, and this is a great team. This a great opportunity to go and play with this team and come out with a victory.”

Henne replaced Mahomes in the third quarter. Mahomes was hit hard by Browns linebacker Mack Wilson on a third-quarter rushing attempt and appeared unsteady as he got to his feet. He was taken to the injury tent on the sideline for a quick examination before heading to the locker room.

Mahomes’ status for next Sunday’s AFC Championship Game against the Buffalo Bills at Arrowhead Stadium is unclear. The Chiefs beat the Bills 26-17 in Week 6 in Buffalo with Mahomes at quarterback.

After the game, Wilson tweeted that he hoped Mahomes will be able to return for the AFC title game, to which Mahomes replied: “All good brother!”

If Henne has to play instead, the two plays he made on the Chiefs’ final drive will help give his teammates some confidence they can beat the Bills and advance to Super Bowl LV.

“That’s all heart,” defensive back Tyrann Mathieu said of Henne on the final drive. “Those are the moments that lift teams.”