Liverpool’s goal drought could cost them the Premier League, so why can’t they score? 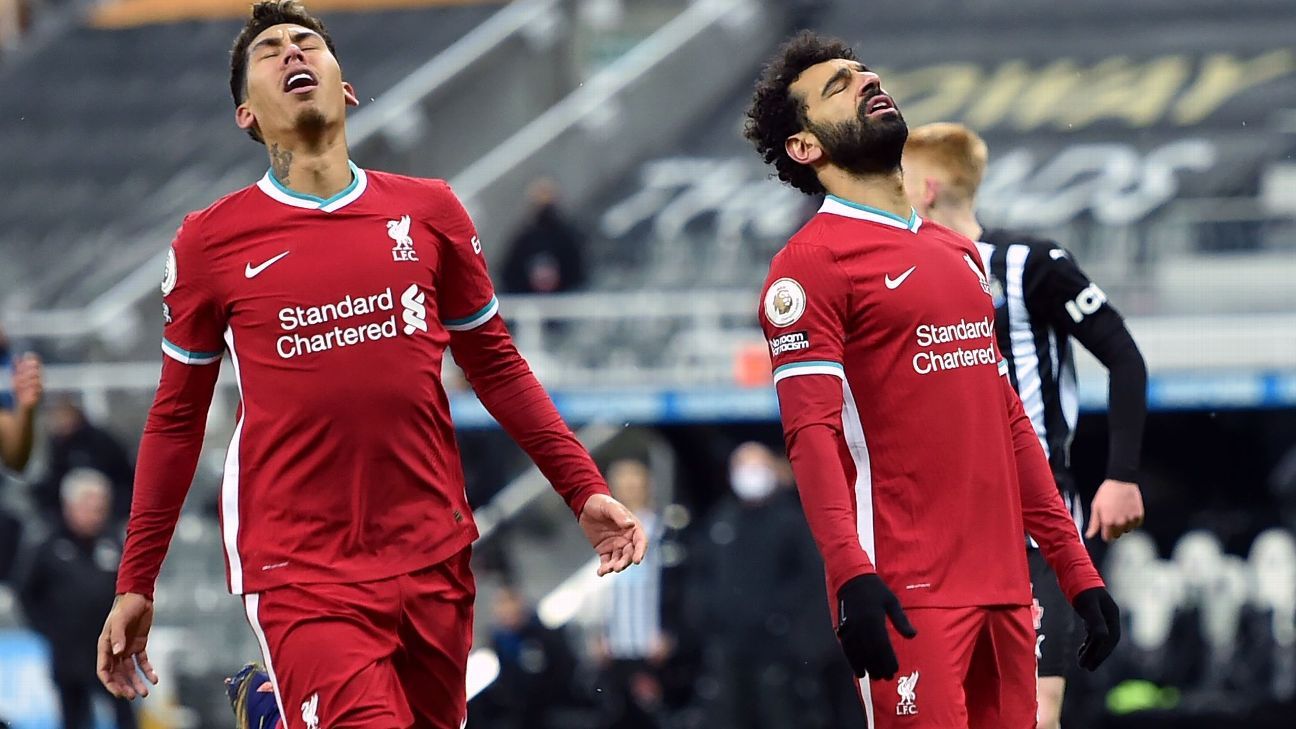 
What has happened to Liverpool’s strikeforce? The team that won the Premier League last season on a seemingly endless wave of goals and attacking moves involving Mohamed Salah, Sadio Mane and Roberto Firmino are now on a barren run which is threatening to derail their hopes of retaining the title.

After 18 league games last season, Liverpool had scored 46 goals; after the same number of fixtures this time around, they have managed just 37 — a tally which is only so high thanks to the 7-0 win at Crystal Palace last month.

Liverpool have scored just once in four league games since, during the 1-1 draw at home to West Brom on Dec. 27, and Sunday’s 0-0 stalemate against Manchester United at Anfield means that the champions have now gone three league games without scoring for the first time since Rafael Benitez’s team in February-March 2005.

Back then, Liverpool went 310 minutes without a league goal, yet it is now 348 minutes since Mane score the last league goal for Jurgen Klopp’s team in that draw against West Brom. Don’t worry if you’re confused and finding it difficult to come up with a reason why Liverpool have stopped scoring, though, because even Klopp is struggling to pinpoint the problem.

“There’s no easy explanation,” he said after the draw against United. “We have always missed chances, but we would just have another one which we used and that’s how it is. But we have to keep going. In these situations in football, you always have to keep going. You have to try to ignore the talk around, because that’s how it is — it’s football, everybody wants to see goals, if you don’t score goals, everybody talks about it.

“But we have to stay focused on doing the right stuff. You cannot force it, ‘shoot now’ or stuff like this, it’s more important the way you react to a missed chance. It’s about creating; you have to create and create and create, then we will score.”

While there is no single factor behind Liverpool’s goals drying up, there are several areas of concern that are contributing to the issue. Some are bigger than others and will be more difficult to resolve, but right now, Liverpool’s goal threat is resembling a jigsaw that needs putting back together. So what are the key areas to be addressed?

HAVING TO COPE WITHOUT VIRGIL VAN DIJK

When Virgil van Dijk suffered a cruciate knee ligament injury against Everton in October, it was always going to have a major impact on Liverpool’s season. The Dutch defender has been the defensive rock on which the team’s success has been built and his absence has led to more goals being conceded — 21 after 18 games, compared to 14 after the same number of fixtures last year.

But while the loss of Van Dijk has weakened Liverpool defensively, it has also impacted on the team’s attacking play because, without their best defender, Klopp’s team is now defending deeper.

Liverpool defended much higher up the pitch with Van Dijk in the team because his pace and reading of the game gave them the confidence to do so. In turn, it enabled Liverpool to squeeze opponents back into their own territory and intensify the attacking pressure, which led to more chances and goals. Without Van Dijk, Liverpool’s defenders are retreating further — visually by about 10 metres — and it is giving opponents the space to breathe and clear danger.

THE ABSENCE OF DIOGO JOTA

Until he was injured against FC Midtjylland on Dec. 9, Jota was producing the form that made him one of the signings of the season. When the Portugal international arrived from Wolves for an initial £40m in September, it seemed to be no more than an expensive outlay on a squad player, but while the 24-year-old has not secured a regular starting spot in Klopp’s team, his impact before being injured was significant.

Jota netted five goals in nine Premier League appearances and they were important ones too, with his strikes against Sheffield United and West Ham proving to be decisive in narrow 2-1 wins.

In less than three months at Anfield, Jota moved ahead of Divock Origi and Takumi Minamino as Klopp’s preferred option as the fourth forward and his contribution gave Liverpool added threat and created space for Salah, Mane and Firmino to create more chances. But with Jota sidelined, Liverpool have won just twice in seven league games and failed to score in three of them.

NO SUPPLY LINE FROM MIDFIELD

Klopp can count on at least eight central midfielders in his squad and all have played some part in the Premier League this season, but after 18 games, they have collectively managed just three assists between them.

Jordan Henderson, James Milner and Alex Oxlade-Chamberlain all have one assist each, but Georginio Wijnaldum, Naby Keita, Thiago Alcantara and Fabinho are still waiting to create their first league goal. Though in Fabinho’s defence, the Brazilian has spent much of this season as an emergency centre-back due to Van Dijk and Joe Gomes being sidelined by injury.

It doesn’t get much better with the wide/attacking midfielders either. Xherdan Shaqiri has created one league goal, while Curtis Jones and Takumi Minamino have none.

Liverpool’s big threat remains down the flanks, where Andy Robertson (five) and Trent Alexander-Arnold (two) are still creating goals from full-back, although they are some way short of matching their combined total of 25 assists last season. But with such little creativity from midfield, it is no surprise that chances are drying up for the forwards.

Salah is proving to be an enigma for Liverpool this season. The Egypt international leads the race for the Premier League Golden Boot with 13 goals in 18 games (ahead of Tottenham duo Harry Kane and Son Heung-Min), but it is difficult to argue that he is playing anywhere close to his best form.

The forward has now gone four league games without a goal since netting twice in the 7-0 victory against Crystal Palace last month and he has played all but one minute of those four fixtures.

In an interview with Diario AS last month, Salah opened the door to speculation over his Liverpool future by talking of his admiration of Real Madrid and Barcelona at the same time as admitting to being “very disappointed” not to have been given the Liverpool captaincy against Midtjylland last month.

Salah’s performances since that interview have been underwhelming, so questions will inevitably be raised about his focus. Those questions will only get louder if his goal drought continues.

The FC guys dive into the struggles of Liverpool’s attacking trio after their scoreless draw vs. Man United.

Klopp has consistently defended Roberto Firmino’s contribution to this Liverpool team against accusations that the Brazilian doesn’t score enough goals to merit his continued presence as centre-forward.

Firmino is the ultimate team player and there is no question that he has been an integral part in Liverpool’s recent successes because his unselfishness and workrate create so many opportunities for Salah and Mane. But when the team isn’t scoring, Firmino’s lack of goal threat becomes more of an issue and poses the question whether Liverpool need a more dynamic and goal-hungry striker.

He has scored five league goals this season — more than half his tally of nine last season — but he has created just three assists compared to eight last term. At 29, he is still young enough to be an important part of this team for another few years, but if Mane and Salah aren’t scoring, Firmino needs to do more.

PLAN B HAS BEEN HIT BY INJURIES

Liverpool signed creative midfielder Thiago Alcantara from Bayern Munich earlier this season to give Klopp’s team a Plan B in terms of opening up opponents. This was evident on his debut against Chelsea in September when he came on at half-time and transformed the way that Liverpool played with his passing and ability to control possession.

But a knee injury has restricted Thiago to just five Premier League appearances — Sunday’s game against United was his first appearance at Anfield — and Klopp has been unable to use the 29-year-old as much as he would have wished.

With Thiago, Liverpool are able to play a more patient, probing game and leave opponents guessing, but he has just not been available often enough for that to happen.

THE CONCLUSION: OPPONENTS HAVE WISED UP

Liverpool arguably started their rise to success in January 2018, when Virgil van Dijk’s £75m transfer from Southampton transformed Klopp’s team from a very good one into a great one. But three years is a long time in football and most top teams have gone through some kind of evolution during that period in order to keep them ahead of the pack.

Liverpool’s evolution has been minimal since then, though, and they are now in the situation where opponents have wised up to their approach and have developed ways to stop it.

With the exception of goalkeeper Alisson Becker, who arrived in the summer of 2018, the key players in Klopp’s team are the same as they were three years ago and there are no secrets anymore with this Liverpool side.

Teams know how Mane and Salah like to receive the ball and what they do with it, they know that Liverpool lack creativity in midfield and that Van Dijk’s injury has taken away their self-confidence at the back. They know that the full-backs are Liverpool’s most potent creative force, so they are learning all the time how to stop them.

Liverpool’s rivals have figured them out; Klopp now needs to outsmart them all again to end the goal drought.