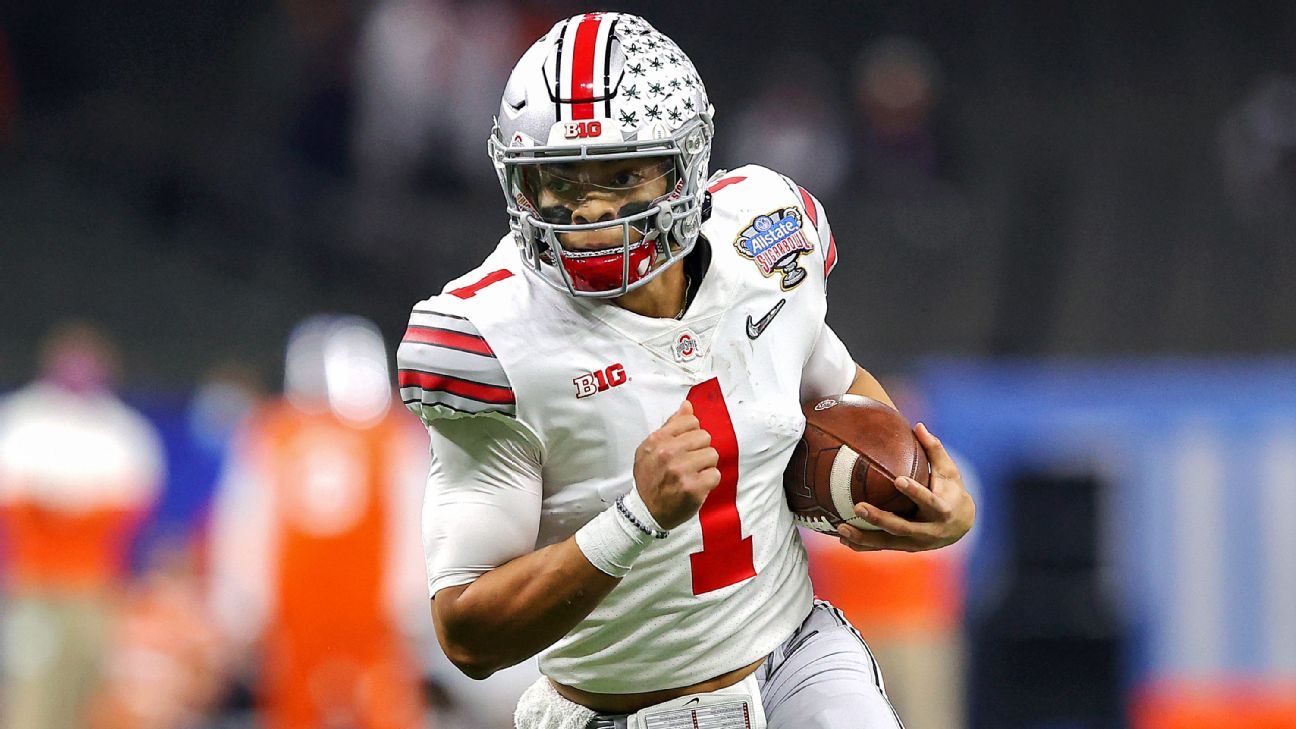 
Ohio State quarterback Justin Fields is headed to the NFL draft after two seasons with the Buckeyes, he announced Monday.

Fields made the announcement on Twitter, writing, “My path to The Ohio State University was not a direct one, but I could not have asked for a better final destination.”

Fields played his freshman season at Georgia before transferring to Ohio State in January 2019. Soon after, he received a waiver to be immediately eligible for the 2019 season, in which he put up record-setting numbers for the Big Ten champion Buckeyes and was a finalist for the Heisman Trophy.

ESPN’s Mel Kiper Jr. ranks Fields as the No. 3 overall prospect for the 2021 draft, behind Clemson quarterback Trevor Lawrence and Oregon offensive tackle Penei Sewell. In two seasons at Ohio State, Fields had 5,373 passing yards with 63 touchdowns and nine interceptions, to go along with 867 rushing yards and 15 touchdowns. Fields is set to become the second Ohio State quarterback drafted in the first round in three seasons, after the school had none between Art Schlichter in 1982 and Dwayne Haskins in 2019.

Fields in 2019 became the first Big Ten player with 40 passing touchdowns and 10 rushing touchdowns in a season, earning the league’s Offensive Player of the Year award. He led the nation in touchdown-to-interception ratio (41-3) and won MVP honors in the Big Ten championship game against Wisconsin.

Behind Fields, Ohio State won two Big Ten titles and made consecutive CFP appearances for the first time, falling to Clemson and Lawrence in the 2019 semifinals before beating Clemson this year and falling to Alabama in the national title game Jan. 11. Fields played through an injury to his throwing thumb in the Big Ten championship game and a massive hit to his rib area in the semifinal win over Clemson.

Fields, 21, was ESPN’s No. 1 overall recruit in the 2018 class, one spot ahead of Lawrence, a fellow Georgia native. He played sparingly behind Jake Fromm during the 2018 season at Georgia, passing for 328 yards and four touchdowns.

Davis, an All-American and Ohio State’s best offensive lineman, is rated as the No. 2 guard available in the upcoming draft, according to Kiper.

Conquering K2 in winter ‘together’

Italy smoking: Want to light up in Milan? Not any more, you can't