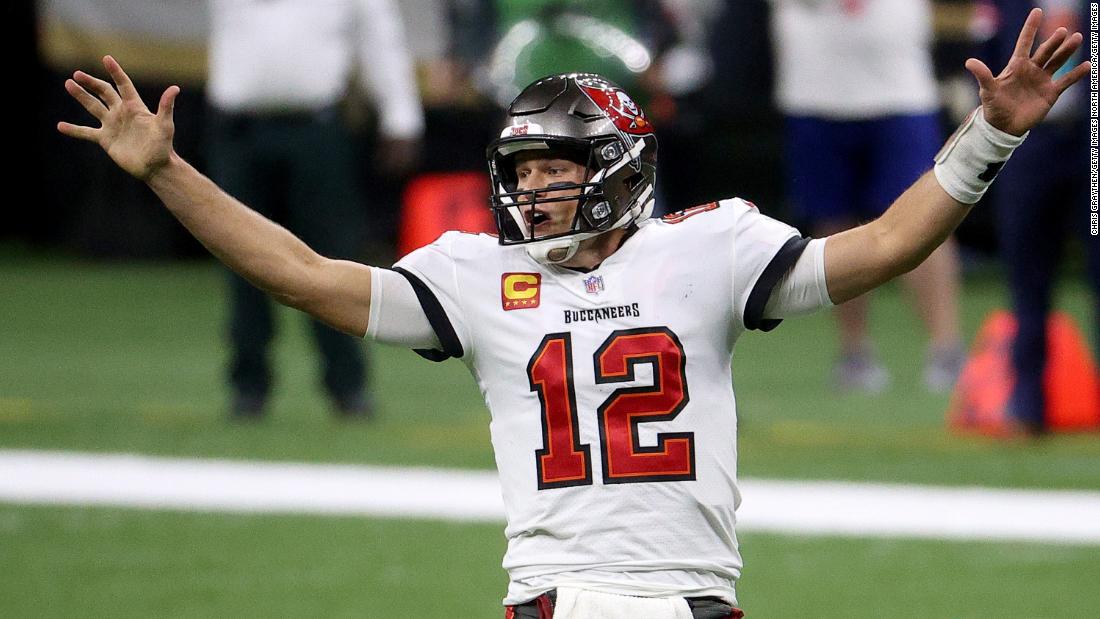 In a game that saw Brady up against fellow veteran quarterback Drew Brees — the pair’s combined age of 85 years and 169 days is the oldest combined age of opposing starting quarterbacks in a single game — it was the Bucs’ new signing who had the upper hand with two touchdown passes as well as scoring one himself.

The Chiefs lost quarterback Patrick Mahomes to a concussion in the third quarter against the Cleveland Browns on Sunday but managed to grind out a 22-17 win.

While the Saints led in the early exchanges at Mercedes-Benz Superdome, it was the Bucs’ defense that forced crucial turnovers and proved decisive.

Brady’s two touchdown passes were finished by Mike Evans and Leonard Fournette before his own score in the fourth quarter settled the game.

“For us going into this week, we had to play a great game, and our defense stepped up and played huge,” said Brady.

“Like I said, the offensive line was incredible. It was just a hard-fought game, a very physical game.

“We’ll need to get our rest … and be ready to go for practice on Wednesday.”

For Brees, this could have been the final game of his career with uncertainty over the 42-year-old’s future swirling.

He added: “Obviously, he’s been tremendous for this team, this city, I could go on and on. But let’s wait and answer that at the right time.”

READ: Eying successive Super Bowl titles, Kansas City Chiefs prepare to ‘heal’ ahead of playoffs
READ: ‘If I would have known then what I know now, I would have never stepped foot in the NFL,’ says NFL cheerleader

‘Not going to flinch’

In Sunday’s other game, the Chiefs had to call upon backup quarterback Chad Henne to guide the team to victory over the Browns.

Mahomes, last season’s Super Bowl MVP, had opened the scoring as he ran in a one-yard touchdown before finding Travis Kelce for the game’s second touchdown.

But he was forced off the field midway through the third quarter due to concussion protocol and in the second half the Browns started to close the gap in the scoreline.

“Somewhere you’ve got to be able to reach deep in tough times and pull that out,” said Chiefs head coach Andy Reid of the way his team reacted after losing Mahomes and held on for the win.

“And our locker room is not going to flinch. They’re tough that way.”

The Chiefs now face the Bills on January 24 for a spot in Super Bowl LV.

Covid: Brazil approves and rolls out AstraZeneca and Sinovac vaccines

Australian Open 2021: ‘No special treatment’ for tennis players in Melbourne

Bank of England takes interest rates to highest level since 2008

A video that could undermine Alex Murdaugh’s claim he…

Bringing music to the masses… on a tram