US economy: Joe Biden doesn’t have a magic wand to fix it 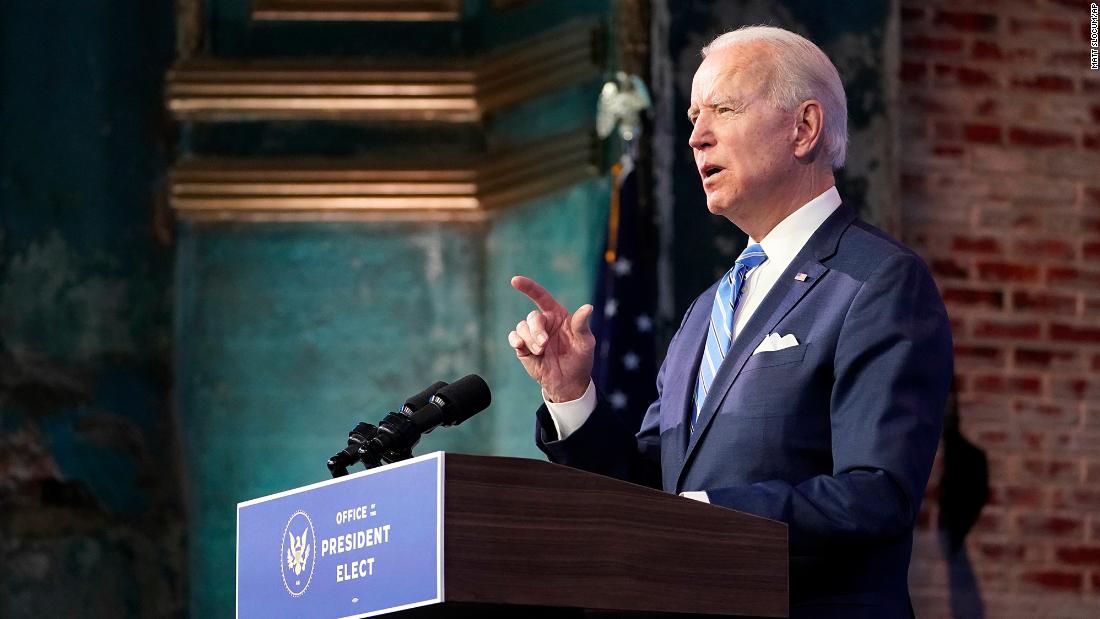 But many economists and business leaders agree that no amount of government assistance to individuals and small businesses can fix the economy until the underlying cause of the problems — the Covid-19 pandemic — has been defeated. At best, the combination of the $900 billion plan passed in December, and this plan from the president-elect, can only help the economy to continue to tread water until the pandemic is under control.

“This is a very large package, but it’s about helping the economy hang together as well as it can hang together until the end of the pandemic,” said Mark Zandi, chief economist at Moody’s Analytics.

Zandi and other economists believe that the gross domestic product, the broadest measure of the nation’s economic activity, could soar if Biden gets his full package soon after taking office. But job growth will be far more muted.

The US economy lost 22 million jobs in March and April and ended the year with another 140,000 net jobs decline. Even with the 12.5 million jobs recovered in between, that left the headcount at US employers down nearly 10 million during the pandemic. Moody’s forecast that those jobs won’t be fully recovered until 2022, even if Biden gets his full package.

“We get a lot growth in GDP up front, but it’ll take 18-24 months to get all those jobs back,” said Zandi. “A lot of people just can’t go back to work until the pandemic is in the rearview mirror.”

And unfortunately, the message from public health experts is clear: The pandemic is going to get worse before it gets better.
New cases, hospitalizations and deaths in the United States are at or near record highs. That could lead to renewed lockdown orders and business closings in many parts of the country, as have been imposed in other nations, especially with a new, more transmittable version of the virus. The vaccine now being rolled out isn’t expected to reach enough of the population to allow the majority of Americans to return to normal life until the summer, at the earliest.
That could mean a slower-than-hoped-for return to economic activity, such as eating at restaurants and travel. The economy lost jobs in December for the first time since April because of massive unemployment in leisure and hospitality businesses, as well as restaurants and bars. The stimulus might help many businesses and individuals weather the storm, but it won’t save all of them from going out of business, according to experts.

“There’s not really much you can do from an economic policy perspective when the pandemic is continuing to rage,” said Andrew Hunter, senior US economist for Capital Economics. “Things are looking good for some time later this year, but it depends first of all on getting vaccines rolled out so things can return to normal.”

Biden has promised to step up vaccination efforts that he said have been “a dismal failure thus far.” But it’s not clear how successful those efforts will be, and how much they could be slowed by resistance by many members of the public to get vaccinated.

“We’re having a slower than expected vaccine rollout, and that is really weighing on the expectations about when we’ll return to pre-pandemic life,” said Ed Moya senior market analyst for Onada.

And that uncertainty is causing problems for businesses, from retailers to airlines to banks, as they try to make plans, even businesses that have so far done well.

“The rules of the game keep changing. For a business person, that is overwhelming,” said Zandi. “They’re not going to feel like the coast is clear. That uncertainty will depress ability to go out and expand and grow. They’re not going to go out and hire more people because they’re not sure what lays ahead in the future. This is going to be a process. I don’t think it’s like a light switch going on.”

Also preventing the economy from getting a quick boost from the proposed stimulus package is the fact that many businesses have already closed permanently because of the crisis, and thus permanent job losses are rising. The money Biden is proposing in direct aid to most US households and expanded and extended unemployment benefits will help many families weather the crisis, but it won’t repair all the damage done to the economy during the crisis.

“It takes a lot less time to destroy the jobs than it does for the economy to create new jobs,” said Joel Prakken, chief US economist for IHS Markit, “I’ve seen estimates that a third of jobs lost will never come back in their previous form.”

Will it be enough?

The money Biden proposed is only slightly less than what was passed under the CARES Act in March, but Biden made clear last week that this is only the first step of what he’ll be asking Congress to spend. This first package is more than twice as much as the $787 billion stimulus package passed soon after Barack Obama and Biden took office in 2009, in the depths of the Great Recession.

The money in the CARES Act, passed at a time that more 22 million Americans were losing their jobs, did have notable impact on the economy and households’ ability to weather the economic crisis. Despite the economic upheaval, the number of individual bankruptcy filings fell 31% in 2020, to the lowest level since 1987, according to analysis by the Equip for the American Bankruptcy Institute.

But that support, as important as it was, didn’t end the economic crisis. Even with millions of those on temporary layoffs being called back to work, there remain 10.7 million people looking for jobs who can’t find them, 2.2 million more who want jobs but have stopped looking and 6.2 million who are working only part-time even though they want a full-time job. Getting them back to work will take time, even with the stimulus, according to experts.

And much of that help has run out, or will run out soon. It’s not clear how much of the $1.9 trillion that Biden is asking for will be approved by a divided Congress. IHS Markit’s Prakken thinks the final amount is likely to be closer to $1 trillion. Moody’s is estimating it might be closer to $750 billion.

But the key for when the economy is recovered probably depends less on the stimulus than on the state of the pandemic and when life returns to something that feels more normal, for businesses and their customers.

“Deaths are likely to peak probably sometime late winter/early spring,” said Prakken. “It’ll probably be sometime in second half of the year that people will be more comfortable going out.”