Jets should be all-in on Texans’ Deshaun Watson, but reality could stand in way 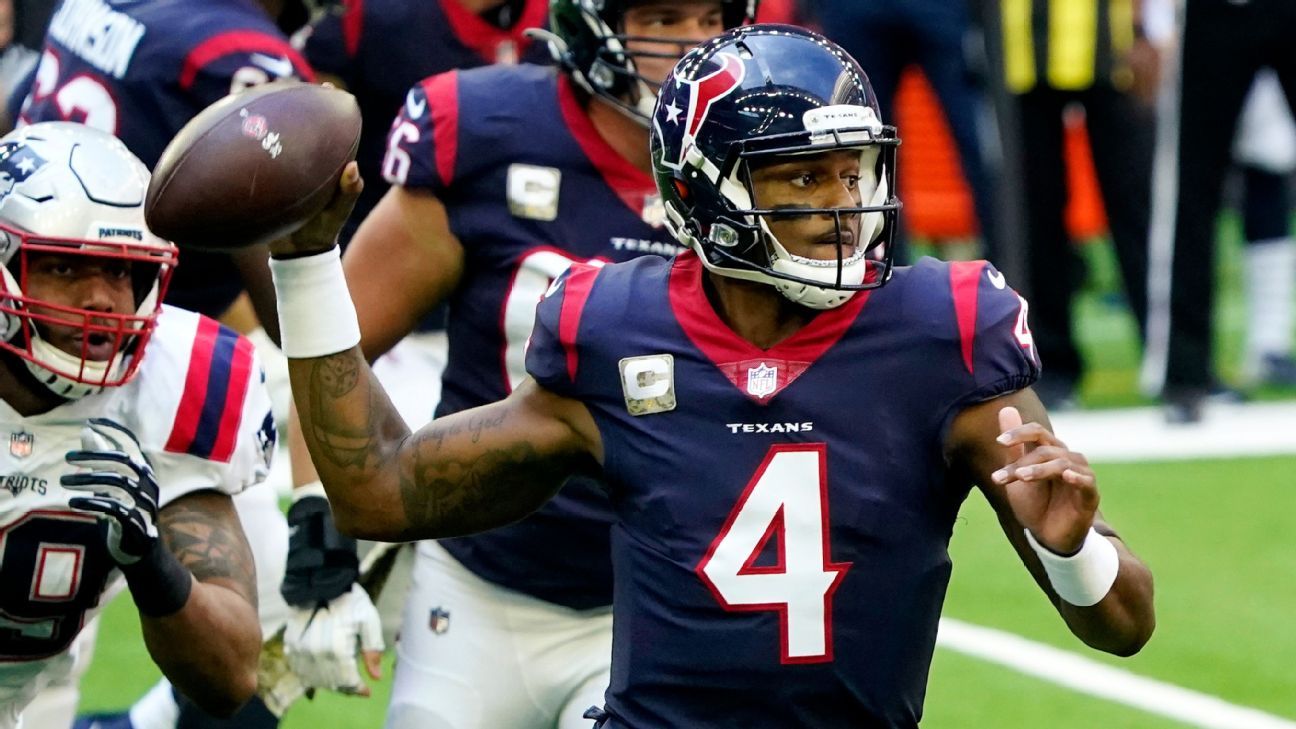 With the NFL’s speculation machine working at high speed, the New York Jets have been linked to Deshaun Watson in potential trade scenarios for the disgruntled Houston Texans quarterback. The talk shows, local and national, were buzzing on Monday.

The back page of the New York Post, playing on Watson’s last name, screamed: “WATEVER IT TAKES.”

Let’s take a deep breath and analyze the situation. At this early stage, three questions can be considered:

Should the Jets pursue Watson if he becomes available? Yes, absolutely. They passed on him once (2017 NFL draft). It would be borderline negligent to do it again. Pick up the phone. Make an offer. We’re talking about one of the best players in the league.

Will the Jets make an aggressive run at him? Call me skeptical, but the hunch is general manager Joe Douglas won’t open his treasure chest of draft picks and trade them for one player.

Would Watson waive his no-trade clause to play for the Jets? This is the question that is being underplayed. Basically, he has the ability to pick his destination. While the hiring of coach Robert Saleh has sparked excitement, the Jets are starting over from rock bottom. Watson will have better options.

Before we dive into the particulars of why the Jets should go all-in on the superstar quarterback, let’s recap the unfolding drama in Texas.

Watson reportedly hasn’t asked for a trade, but widespread reports suggest the situation is deteriorating. On Sunday, ESPN’s Adam Schefter reported that multiple people in and around the Houston organization believe Watson won’t play again for the Texans.

The Jets are in the middle of the Watson storm because of their unsettled quarterback situation and because they hold four first-round picks in the 2021 and 2022 drafts, including the No. 2 overall choice in this April’s draft. A team will have to move mountains to get Watson. In the Jets’ case, we’re talking Rockies, not Appalachians.

A look at the New York Jets’ draft selections for the upcoming two drafts. This year’s event will be held April 29-May 1 in Cleveland, Ohio:

The price would be exorbitant. You’re talking about at least three first-round picks. Think about it: If Jamal Adams fetched two first-rounders — a strong safety — imagine the cost for a 25-year-old quarterback who has made three Pro Bowls and is signed through 2025.

Conventional thinking suggests pursuing Watson wouldn’t be a wise move for the Jets, who fall into the “more than one player away” category. A fair concern, to be sure. Watson was brilliant this season — 4,823 yards and 33 touchdown passes — and the Texans went 4-12. So, yes, it takes more than a superstar quarterback.

If the Jets trade three first-rounders for Watson, they’d be mortgaging a significant part of their future and would have to rely heavily on NFL free agency to bring in talent — not the optimal way to build a roster. Douglas created a rebuilding blueprint that hinges largely on that draft capital.

But you know what? Sometimes the best-laid plans need to be junked and remastered. Conventional thinking doesn’t win championships.

If Watson is put on the block, it would be a rare opportunity to get a franchise quarterback in his prime. The narrative coming out of the Jets’ 2-14 season was how the team lacked a positive culture. Put a player like Watson in the locker room and watch how quickly the culture changes. He would be their best offensive player since … well, maybe ever. He would make everyone better.

Money and salary-cap space wouldn’t be an issue. The Jets have a ton of cap room, and Watson’s charges from 2021 to 2025 would be $10.5 million, $35 million, $37 million, $29.3 million and $32 million. Remember, the team that trades for him doesn’t have to pick up the prorated portion of his signing bonus; the Texans are on the hook for that.

The Jets would recoup $4.8 million in cap room by trading incumbent Sam Darnold, who would bring back a second- or third-round pick.

Randy Moss speaks about Deshaun Watson in Houston, saying the organization has failed him over his time with the team.

All this speculation will be moot if Douglas decides to stay the course and build through the draft, but that is a flawed plan as it pertains to the quarterback situation — unless he’s convinced one of the draft-eligible quarterbacks not named Trevor Lawrence has Watson-like potential.

But if Douglas has reservations about Justin Fields & Co. and runs it back with Darnold without ever checking into Watson … well, that would be a big mistake.

The biggest obstacle in a potential blockbuster transaction is Watson himself, convincing him to accept a trade to the Jets over, say, the Miami Dolphins, reportedly one of his preferred destinations.

With a no-trade clause, Watson can control the process like few players before him. The Dolphins went 10-6 with a promising young coach in Brian Flores. Plus, Florida has no state income tax, which saves a lot of money for an individual who is making millions.

The Jets are a losing franchise — 10 consecutive seasons since a postseason appearance. New York’s biggest selling point is its draft capital, but most of that would be wiped out by the trade, leaving Watson surrounded by a Swiss cheese lineup.

Hey, there’s no harm in trying to pull off the trade of the century, but Jets fans, you might want to hold off on buying a Watson jersey.

US historians on what Donald Trump's legacy will be