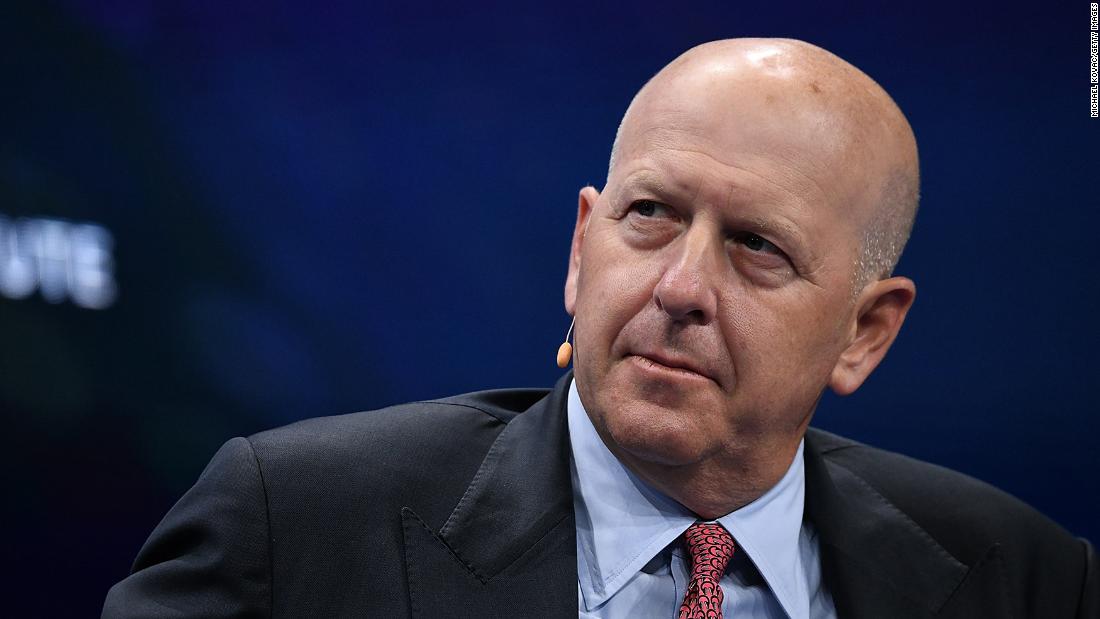 It’s yet another sign of the disconnect between the strength of the stock market and the struggles many average Americans face due to the coronavirus pandemic.

Shares of Goldman Sachs (GS) fell slightly in early morning trading after the earnings report was released. But the stock is up nearly 15% in 2021 and is not far from its all-time high.

The company reported record revenue from its investment banking unit, thanks to booming demand for initial public offerings and an increase in merger activity. Goldman Sachs also said it posted its best year for global markets revenue in a decade, largely due to strong trading volume for stocks, bonds, currencies and commodities.

Goldman Sachs chairman and CEO David Solomon said in a press release that “it was a challenging year on many fronts” and added that “we hope this year brings much needed stability and a respite from the pandemic.”

Still, the rally on Wall Street may be a case of stocks going up too far too fast. Solomon recently told Axios in an interview that he was worried about “some excess in the market.”
The latest numbers from Goldman Sachs follow strong earnings reports last week from JPMorgan Chase (JPM) and asset management giant BlackRock (BLK) as well as mixed results from Wells Fargo (WFC) and Citigroup (C). Bank of America (BAC) also reported earnings that beat forecasts but revenue that missed estimates on Tuesday.

“It’s a tale of two different cities,” said Mark Doctoroff, global co-head of financial institution coverage for MUFG, in an interview with CNN Business about bank earnings. “Corporate America is resilient and healthy but small businesses are hurting.”

Doctoroff noted that banks with more exposure to big businesses — ones that advise on mergers and initial public offerings — are doing well. But those with deeper ties to consumers and smaller local merchants have been hit harder by the Covid-19 pandemic and resulting economic slowdown.

Goldman Sachs said in its earnings release that revenue from its consumer and wealth management unit grew 15% last year to $6 billion. The business now accounts for nearly 15% of the firm’s overall revenue.

And Goldman Sachs is looking to bolster Marcus further. The company announced last week it was partnering with card issuing company Marqeta, which Goldman Sachs has a stake in, to begin offering digital checking accounts to Marcus customers later this year.
Goldman Sachs also said last week that it is collaborating with MasterCard (MA) to issue General Motors (GM)-branded credit cards. The bank is already partnering with Apple (AAPL) on the iPhone maker’s Apple Card.

But Solomon, like many other business leaders recently, stressed that any rebound for consumer spending and the broader economy will largely depend on the success of Covid-19 vaccinations and plans for more government stimulus.

“Although we are now seeing the initial rollout of vaccines in the U.S., U.K. and other nations, there remains significant uncertainty in the path forward related to virus resurgence, vaccine distribution and further fiscal stimulus and geopolitical risks,” Solomon said on the earnings call.

He added that “progress on economic growth is contingent on an effective vaccine rollout program globally” and urged political leaders around the world “to do everything possible to implement a coordinated and comprehensive distribution plan.”

“In its absence,” Solomon said, “economic recovery will be unnecessarily delayed.”

Jets should be all-in on Texans’ Deshaun Watson, but reality could stand in way

The next phase of Phil Mickelson, and other important things happening in golf