The Black cowboys and cowgirls of American cities 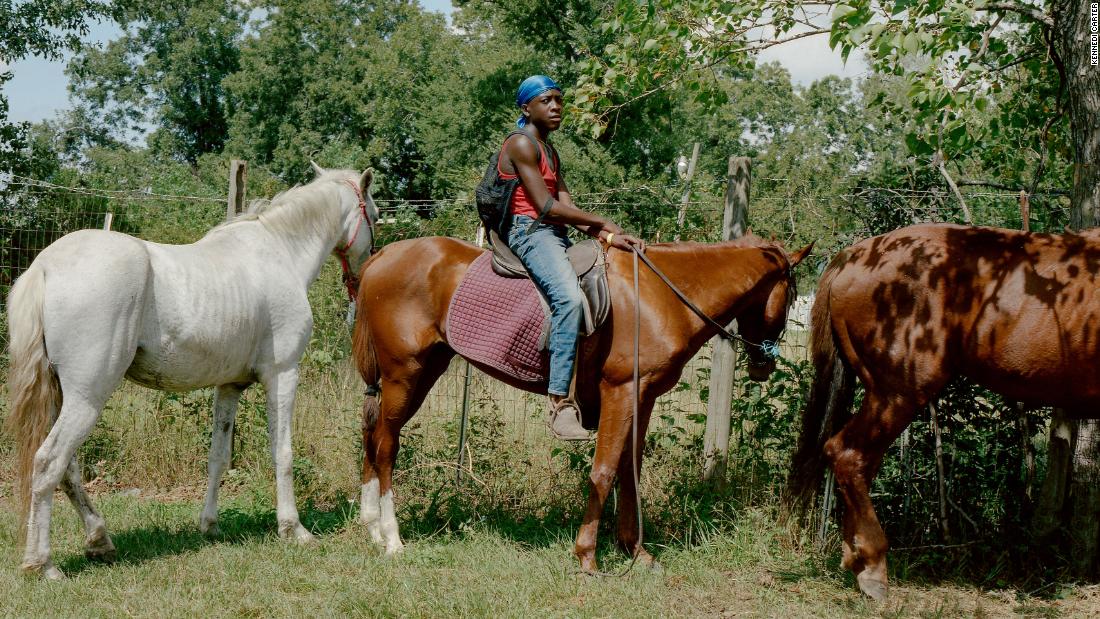 As a child, while visiting family in Texas, photographer Kennedi Carter remembers Black cowboys riding their horses on the side of the highway. That image stayed with her over the years, as the North Carolina native began her career taking emotive photographs of Black life as well as striking editorial images. (Last December, Carter notably became the youngest photographer to shoot a British Vogue cover.)

She eventually returned to the powerful memory, starting an ongoing series, “Ridin’ Sucka Free” about Black riders in American cities, such as Houston and Philadelphia.

Over the past decade, images of Black equestrians have entered the popular imagination, as African American cowboy culture has been reassessed in art, film, fashion and music. Artists like Lil Nas X and Solange, for instance, have tapped the symbolism and style of the American West. In 2012, the Quentin Tarantino Western flick “Django Unchained” starred Jamie Foxx, in a genre typically associated with White leads. In 2017, an exhibition at the Studio Museum in Harlem titled “Black Cowboy” showed a rich visual history of the subject, featuring work by photographers Deana Lawson and Ron Tarver. And last year, multiple photographs of stoic Black cowboys and cowgirls on horseback during Black Lives Matter protests went viral.

“There’s just something larger than life about riding horses,” Carter said over video. “Literally, because they’re taller than you; they’re bigger than you. And I think it’s so interesting, even thinking about how Black people weren’t even allowed to ride around on horses for a period of time,” she added, referring to slave-era state laws barring African Americans from raising or riding horses in the antebellum South. “There’s just this freedom that I see whenever I see a horseman.”

Horse riding is an “escape in terms of finding solace and happiness in (the) outdoors and through animals,” said Carter.
Credit: Kennedi Carter

“Ridin’ Sucka Free” shows Black communities carrying on an equestrian tradition that has long been overshadowed in history and pop culture. Rodeos and ranching is almost exclusively associated with White men, evoking an idealized view of masculinity in rural America. Yet historians estimate that one in four cowboys were Black, and, according to the Texas State Historical Association, they took on a number of varying rider’s roles, from horsebreakers to rodeo performers to federal peace officers. Carter’s photographs don’t play into the tired tropes of the American West, but show horseback riding as an act of care and leisure for men, women and children.

The series began on a trail ride in Houston, Texas, where Carter took portraits of men in tank tops, sneakers and gold chains with their horses, against the earthy tones of nature. The next location was Strawberry Mansion, a North Philadelphia neighborhood in Pennsylvania that has struggled with violent crime, but is home to the horsemanship nonprofit Fletcher Street Urban Riding Club.

Carter’s series began on a trail ride in Houston, but with additional shoots in Philadelphia and New Orleans, she now has a larger vision of different communities around the US. Credit: Kennedi Carter

Carter described the riding club’s block as a haven, a “no violence zone,” she said. “People ride dirt bikes up and down the streets. And then kids will come play with the horses; they’ll come after school, or if they’re skipping school, they’ll come there.”

It was there that Carter herself learned how to ride. She got on horseback again in New Orleans, where she added black-and-white images of women and children to the series.

Each community has its traditions and reasons for why they ride. In Texas, Carter notes that it’s tied to the state’s history agriculture and farming; but in Philadelphia, she said, “they were riding for fun, and as a form of escape.”

That difference resonated with her, and she wanted to capture that feeling of joy and freedom in an activity tied to agriculture, a practice that once had dark connotations for African Americans. “I feel like Black people especially try to distance themselves as far as possible from agriculture, and the outside. Sometimes I think it could be some type of post-racial trauma,” she said. “But to see people still working outdoors, doing agricultural work, riding their horses — it feels almost ancestral to me.”

As she widens the project — she has her sights on the Compton Cowboys, as well as making images in the mountainous regions of the Pacific Northwest — she hopes to carry on this sense of solace.

“Horse riding, since it’s not a necessity, is often something they do just to feel good,” she said of the people she’s photographed. “Thinking about the optics of freedom is something that’s really cool to me as well — and I think Black horsemen or Black equestrians in general, are people (who) practice that constantly.”

Aldi, Trader Joe's and others will pay workers to get a vaccine