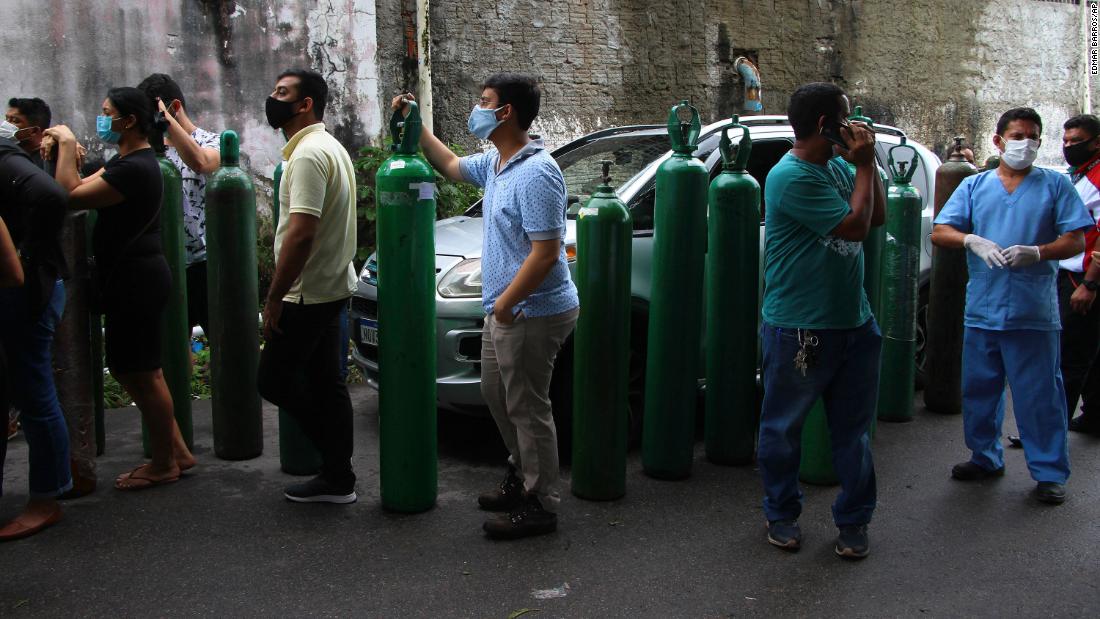 In a country already hard-hit by the coronavirus, oxygen shortages and soaring Covid-19 cases have pushed Manaus, the capital of Amazonas state, into a healthcare crisis. Nurses in the city have been quoted in local news reports as saying patients have died of asphyxiation in the city’s hospitals because there is no oxygen to give them.

The Brazilian government has come under sharp criticism over its handling of the crisis. Last week, Supreme Court judge Ricardo Lewandowski ordered the government to present a response plan to solve the oxygen shortage, citing the Jair Bolsonaro administration’s “omissive behavior” in addressing the emergency.

On Sunday, Bolsonaro’s Solicitor General José Levi do Amaral sent a 16-page report defending the government’s response to the court. The report discloses that the federal health ministry knew about the crisis six days before the situation became critical on January 14.

It is not clear why notifying the federal government of oxygen shortages was allegedly left to a private contractor. According to the Solicitor General’s report, the Manaus health department had been aware that the city’s health system was on the verge of collapse since early January.

Manaus City officials did not respond to a request for comment from CNN.

An Amazonas’ state government spokesperson told CNN they would provide “clarifications” to the Prosecutor General’s office, and added that the state continues to work to mitigate the crisis, including, “the transport of oxygen from other states to Manaus, the installation of mini oxygen in hospitals, the transfer of patients for assistance in other states and the requisition of all production from local oxygen suppliers.”

Brazil’s General Prosecutor Augusto Aras has ordered the Health Ministry to open a probe into the collapse of Manaus’ health system, in addition to a separate investigation examining potential negligence by state and city officials.

But the Solicitor General’s report raises questions about why the federal Health Ministry was not able to help prevent the collapse of Manaus’ healthcare system, after it received advance notice. Officials from the Ministry traveled to Manaus in the beginning of January, and Pazuello personally visited the city from January 11 to January 13.

Disaster struck the city’s hospitals the next day. On January 14, Amazonas state officials announced that Manaus hospitals and emergency rooms faced crippling shortages of oxygen, amid soaring Covid-19 cases. “We are facing a lot of difficulty in getting medical supplies. And as everyone is following, our main difficulty now has been getting oxygen,” Governor Wilson Lima told reporters.

Though the Brazilian air force responded by delivering emergency supplies of liquid and gaseous oxygen, shortages continue. Logistical problems have compounded the crisis, as Manaus’ supplies mainly enter the city via the Amazon River. There is only highway out of the city, which connects it to the neighboring state of Amapá.

Health Minister Eduardo Pazuello has defended his agency’s response. “We took action immediately,” he said at a press briefing in Brasilia on Monday. “There was no indication of lack of oxygen from our meetings in early January. The rise of the cases was very fast,” he said.

“When we [visited Manaus] on [January] 4, the problem was not oxygen. The problem was bed structure, the number of Covid-19 patients, the queues,” Pazuello also said.

Bolsonaro’s appointment of Pazuello, a former military commander, to lead the Health Ministry, have been heavily criticized by opponent as Brazil’s Covid-19 death toll remains second highest in the world, behind only that of the United States.

Bolsonaro himself rejected any responsibility for the city’s lethal crisis. “There is a problem in Manaus … We mourn the deaths from asphyxiation, from lack of oxygen, and people blame the government. We have allocated billions to the states, but those responsible for the lack of medication are the state and municipal health secretaries,” he told supporters on Monday.

His statement followed Vice President Hamilton Mourão’s claim last week that no one could have foreseen the city’s health system collapse.

“You cannot predict what would happen with this (virus) strain that is occurring in Manaus. Totally different from what had happened in the first half,” Mourão said.

Leicester’s win over Chelsea rekindles dream of another title run, while piling pressure on Lampard

Luke Grenfell-Shaw: Cycling around the world with cancer