NHL Power Rankings – 1-31 poll, plus the biggest surprise for every team after opening week 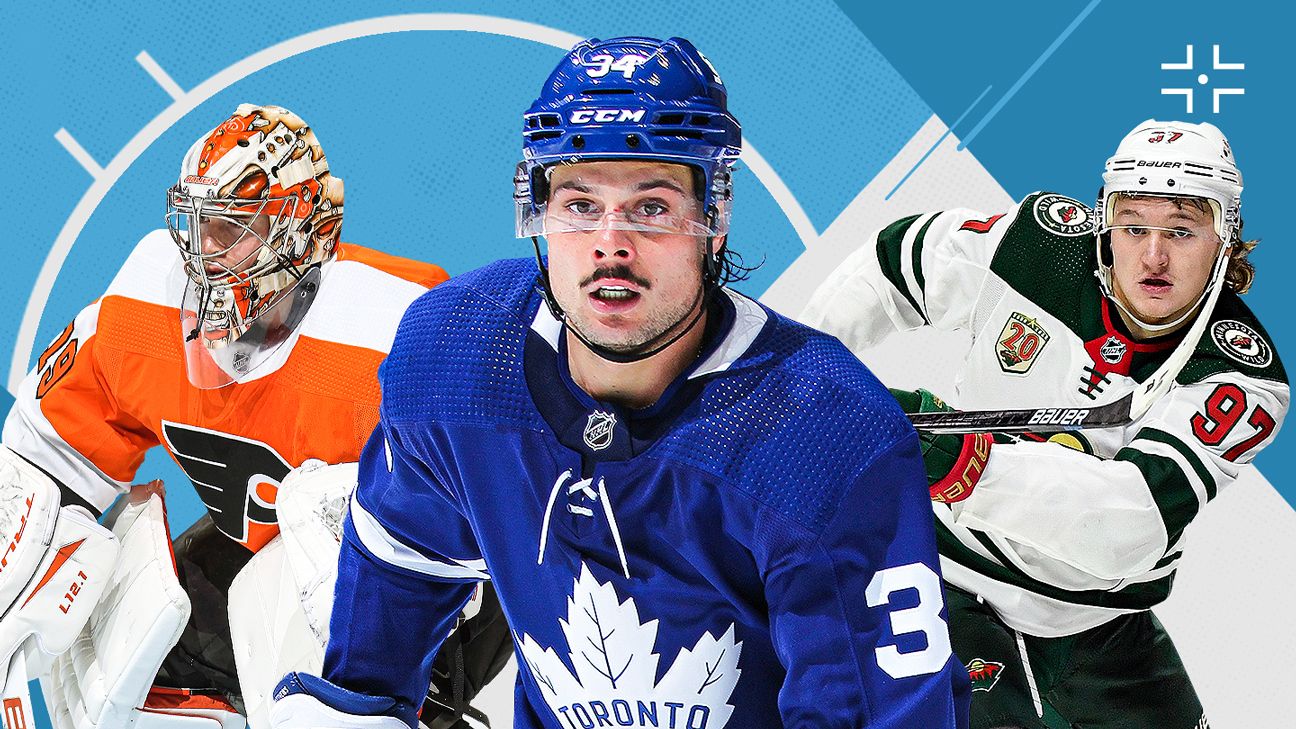 
We’re already one week into the 2021 NHL season, and it has felt like seven straight days of excitement, including some unexpected results.

For this week’s NHL Power Rankings, we identified the biggest surprise for each team.

How we rank: The ESPN hockey editorial staff submits selections ranking teams 1 to 31 — taking into account past results and offseason additions — and those results are tabulated in the list featured here.

Note: Previous ranking for each team refers to our final preseason edition, published on Jan. 13.

The Lightning looked sharp in their first two outings, but they are now in the middle of a week off thanks to the postponements of their games against the Stars. So, surprise: Another mini-training camp to iron out the kinks.

Coach Peter DeBoer said he would like to see his team draw more penalties, and it has yet to score on the power play, which is certainly not expected. But otherwise, Vegas looks sharp to start the season — outscoring opponents 7-0 in the third period to close out games.

It didn’t feel right that the Avalanche came out so flat in their home opener, entering a season with considerable Stanley Cup hype. It wasn’t surprising to see them respond, but it was shocking how dominant it was in hammering a very good Blues team 8-0.

Old habits can be hard to break. The Capitals committed 298 penalties last season (averaging about 10 minutes short-handed per game), which was second most in the league. They have continued that trend this season, including 17 minors through their first four contests alone.

Even good teams are going to have bad nights in this condensed and wonky season. But the Flyers went all of last season not surrendering six or more goals at home, so it was startling to see them do it in Game 3, against the Sabres.

It was surprising to see veteran Jason Spezza on the waiver wire this week (though purely for cap reasons), and luckily he cleared — or he would have retired, per media reports. Spezza has been superb in the faceoff circle in his past two games, winning 17 of 21 draws.

Jordan Kyrou broke a third-period, 4-4 tie with the Sharks on Monday, and it was the 22-year-old’s second game-winning goal of the young season. Kyrou also was credited with the winner in the season opener against Colorado.

The Bruins are four games into their season, have played 189:58 of hockey and have yet to score a goal at 5-on-5. It’s not ideal at all. To fix it, Boston could benefit from its defensemen getting more involved off the rush.

The Stars are opening their season on Friday — delayed a week due to a COVID-19 outbreak on the team — so we’ll have to wait to see how they’ll surprise us.

It’s not surprising at all that Semyon Varlamov began his season with back-to-back shutouts. It is surprising that when Ilya Sorokin got the unexpected start on Saturday, his teammates left him high and dry in a 5-0 thrashing.

A lot of folks around the league pointed to goaltending as a potential weak spot for Carolina this season. The Canes decided to stick with Petr Mrazek and James Reimer, and so far, they’ve only allowed six goals in three games (with a combined .925 save percentage)

The Habs were a trendy pick to take a step forward this season, thanks to plenty of offseason upgrades from general manager Marc Bergevin. Their offense has broken out for 12 goals in three games, and that level of output might be somewhat sustainable.

The Rangers tried Anthony DeAngelo on their first pairing to open up training camp, which was well-deserved after his breakout 2019-20 season. By on opening night, DeAngelo was bumped to the third pairing; and after being burned badly by Mathew Barzal for a goal, the defenseman was a healthy scratch.

The Flames are off to a hot start in the North Division, and their power play looks dangerously good, as they’ve scored on 6 of 16 opportunities (37.5%) so far. A nice wrinkle: Six different players have each scored on the man advantage.

It was unexpected to see coach Joel Quenneville reverse course and actually start Keith Yandle in the opener — preserving the defenseman’s ironman streak, which is fourth longest in league history. Even more dramatic: Yandle scoring a goal.

Following a training camp filled with trade rumors, Patrik Laine had one of his most dominant and engaged performances in the season opener: two goals, an assist and heavy involvement in a scrum. Unfortunately, an upper-body injury sidelined him for multiple games this week.

Offense is the focal point for this team, as it finished middle-of-the-pack last season in scoring and had a defenseman (Roman Josi) as the only player with 50-plus points. It seems notable that through the first three games alone, the Preds have had 16 players register at least one point.

One of the Penguins’ key offseason moves was trading Patric Hornqvist to Florida for 24-year-old defenseman Mike Matheson. But Matheson is going to be out “longer term” with an upper-body injury, per local media, creating an opportunity for Juuso Riikola.

Join or create a league in the No. 1 Fantasy Hockey game, and play your way with custom scoring and lineup features.

Create or join a league today >>

The Canucks’ power play is the perfect showcase of their young, skilled stars. It ranked fourth in the NHL last season (at 24.2%). The man advantage hasn’t looked the same at all this season, currently mired in an 0-for-15 slump.

It’s been a bumpy start to the season for the Oilers. Since it’s a condensed schedule, coach Dave Tippett began shaking things up by Game 4. The coach benched a pair of young defensemen — Ethan Bear and Caleb Jones — to give William Lagesson and veteran Kris Russell a try.

The fact that Phil Kessel already has three goals (after scoring only 14 all of last season) is definitely a welcome development. The Yotes were offensively challenged last season, but they have scored 10 goals over their first three games.

The Blue Jackets got a much-needed first win of the season against Detroit, but it also featured Zach Werenski getting into a scrap with childhood friend Dylan Larkin — even after Larkin left tickets for Werenski’s family to attend the game. Hockey can be cold!

San Jose has just one win in its first three games but leads the league with first-period goals (six). The Sharks’ power play also looks quite efficient, scoring on 5 of 11 opportunities so far (45.5%).

The biggest shocker of the Sabres’ first win of the season (a 6-1 drubbing of Philly): The fourth line sparked the offense. Curtis Lazar scored two, Riley Sheahan had a beautiful assist and the recently demoted Jeff Skinner fired off a team-high eight shot attempts.

• Who will be the top pick this summer? »
• Early top-32 prospect rankings »
• How COVID-19 will impact evaluations »

The most pleasant surprise about the Devils so far is how Jack Hughes looks. He reported to camp with 14 more pounds of muscle (cue the “best shape of my life” clichés), and on the ice, he looks far more confident than he did as a rookie.

The Red Wings traded Andreas Athanasiou to Edmonton last February, then the Oilers didn’t extend a qualifying offer. Athanasiou mustered just $1.2 million for one year from L.A. in free agency. So it was nice to see the speedy winger score goals in his first two games with his new team.

The Red Wings already look improved this season. Bobby Ryan is one of the veterans whom GM Steve Yzerman brought in to help change the culture, and Ryan is already leading by example with four goals in his first three games.

There’s a lot of raw talent on this roster. We didn’t anticipate seeing Ottawa taking one of their two opening games against Toronto — and definitely didn’t anticipate the Senators outscoring the Leafs by a 7-6 aggregate.

Raise your hand if you expected Maxime Comtois (three goals) to be the Ducks’ leading scorer through three games? The 22-year-old had only seven goals in 39 games in his first two seasons. Nicolas Deslauriers (one goal) is the only other Duck to score this season.

One of the bright spots for Chicago last season was the emergence of European free agent Dominik Kubalik, who was named a Calder Trophy finalist after scoring 30 goals. As the team focuses on developing its young players, it’s strange Kubalik continues to get limited ice time.