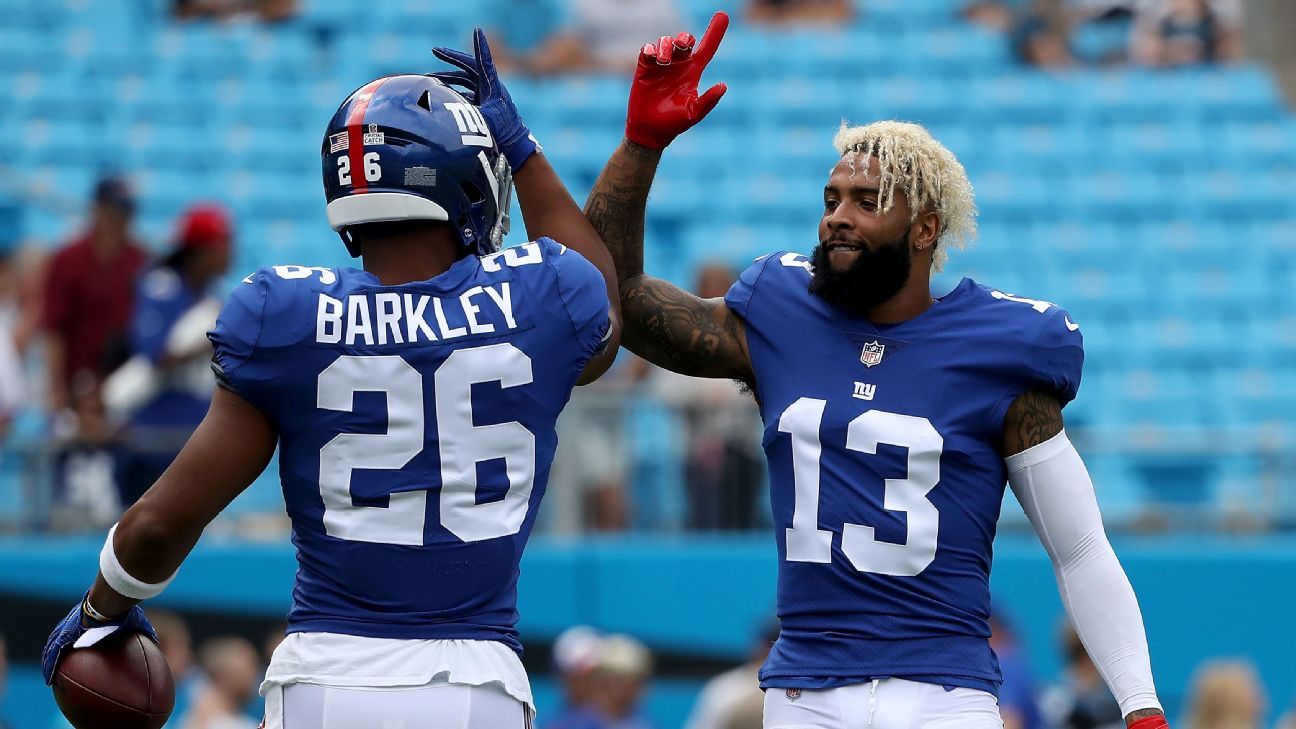 
New York Giants running back Saquon Barkley and Cleveland Browns wide receiver Odell Beckham Jr. are in similar spots. Both are rehabbing torn ACLs and are using each other as resources in the process.

The former Giants teammates speak regularly, and they plan to get together to rehab and train this offseason.

“Only thing I do know that I have planned for sure, I’m definitely going to link up with [Odell],” Barkley told ESPN during an interview he did while promoting Campbell’s Chunky Million Meals Challenge, which is raising money to provide over 100 million meals to children. “Obviously Odell tore his knee a little too. I think we both need just being there. We’re really good friends. Competing with each other and pushing each other will also be good too. That’s the only thing I know for certain I will do. Everything else is up in the air.”

Barkley had surgery on his right knee Oct. 30 in Los Angeles. Beckham needed his left knee repaired Nov. 10 in Florida. So they are not far off as they try to get back to 100% for next season.

Barkley, 23, has been rehabbing at the Giants’ facility in East Rutherford, New Jersey, and praised the work he has done with physical therapist/director of rehabilitation Leigh Weiss and the rest of the team’s staff. That will continue until the NFL finalizes its offseason plans sometime around the Super Bowl. But at some point, he will take his training to the West Coast, where Beckham is stationed.

“Every year we always link up with him at some point, somewhere. Definitely going to find a way to link up,” Barkley said. “Obviously I would love to, any of those guys that are going through this injury, whether it’s Joe [Burrow], [Devin] Bush, Bud [Dupree], there’re a couple guys, any guy, I think it would be really dope if we could all link up.”

Barkley said he thinks being around others in similar predicaments could be useful. Not necessarily to compete but to see how each is attacking his rehab and comeback.

“It’s not more of like comparing [with] each other, because everyone’s injury — they may have this or that — is different,” Barkley said. “So it’s not really more comparing or competing with each other. What I mean by competing, like competing within ourself and making sure that we’re there pushing each other and getting the best out of each other.”

Beckham has consistently been adamant about surrounding himself with like-minded individuals who excel at their given crafts. He is known to be friendly with LeBron James and rapper Drake.

So it’s hardly a surprise Beckham would welcome Barkley into his tight circle. The two have been close ever since Barkley was drafted by the Giants in 2018, and they remained friendly even after Beckham was traded the next year.

“We definitely talk, whether it is on the phone or playing ‘Call of Duty.’ Obviously probably played a little more of that than I would have liked to this year,” Barkley said. “But it was weird. I’m literally rehabbing. I remember I’m rehabbing. I’m looking up, and I’m watching. I see a clip, and I see Odell get hurt. That definitely hurt me.

“But obviously we both wouldn’t want to go through this, I guess you would say, but I think it’s very important that since we are really close and we know each other so well and we are two competitors and we think we can really help each other, I do think it’s important to really link up. But at the same time, we both have to come in with the mindset of getting 1% better each day. That’s what we have to get from each other. Any way you can get it.”