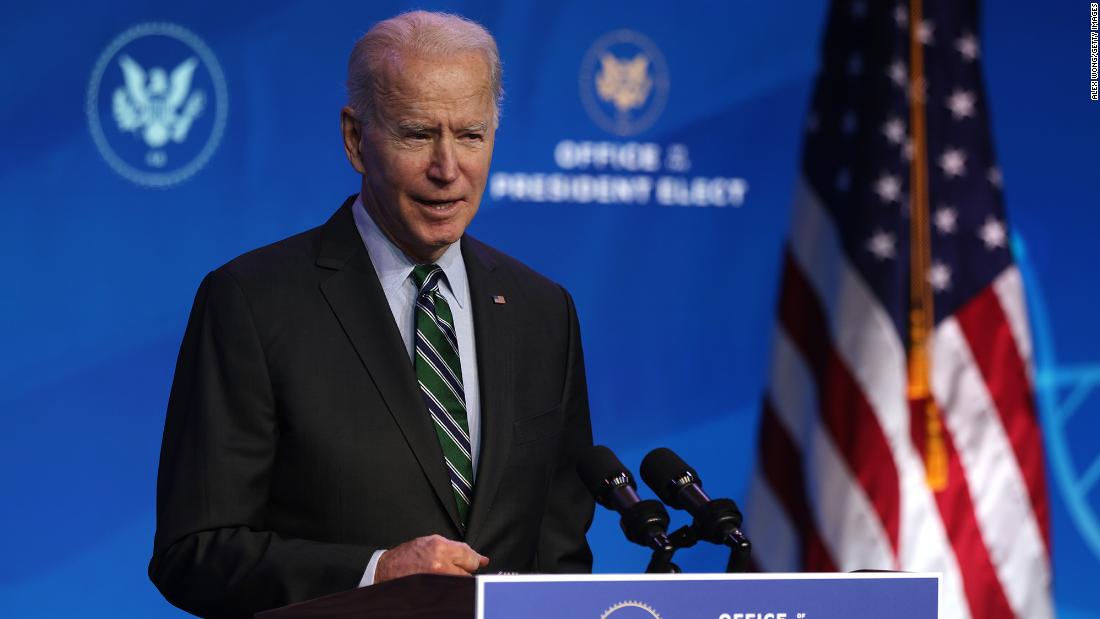 Here are some of the policies he plans to institute to get Americans back to work, boost the number of jobs, increase racial equity and raise taxes, with an aim of reopening the economy.

Biden’s plan for Day One, as detailed on on his campaign website, aims at getting the Covid-19 crisis under control. It calls for doubling the number of drive-thru testing sites around the nation, investing in at-home tests and hiring at least 100,000 Americans to perform contact-tracing. He also wants to invest $25 billion into vaccine manufacturing and distribution, with the goal of getting a vaccine to every American at no cost.

The plan also involves providing funds to state and local governments so they can avoid budget shortfalls, and asking Congress to help schools with Covid-19 resources and covering part of Covid-19 related costs for small businesses.

Biden said he won’t raise taxes on people earning less than $400,000 a year. But he plans to raise revenue in the following ways:

Biden also said he wants to expand the child tax credit to help working families during the pandemic to give parents $3,000 per year for each child between the ages of 6 to 17, and $3,600 per child under age 6. He plans to expand access to refundable health premium tax credits, up to $8,000 annually in tax credits to help pay for child care.

A study from the Wharton School of the University of Pennsylvania projects Biden’s tax plan would raise revenue by $2.3 to $2.6 trillion over the next 10 years with little impact on GDP.

Biden plans to create “at least 5 million” new manufacturing jobs. He wants to invest $400 billion in procurement investment — processes such as supply chains — that drive demand for American products and services, and $300 billion in research and development in tech including artificial intelligence and 5G.

The federal minimum wage, which is currently $7.25, would be raised to at least $15 an hour.

As part of his jobs plan, Biden also wants to invest $70 billion in historically Black colleges and universities and Tribal schools, a move that includes a host of initiatives including scholarships and new facilities.

As for clean energy, his administration would purchase billions of dollars worth of clean vehicles and products and require countries that aren’t environmentally friendly to pay a carbon adjustment tax.

Biden is calling for $10,000 of each student’s federal student loan debt to be canceled immediately as part of the pandemic relief response. An additional $10,000 of student loan debt will be forgiven for every year of community service performed by individuals for up to five years, under Biden’s plan. He also wants to double the maximum amount of Pell grants and increase the number of students who can access to financial aid, while halving federal student loan payments.

Those who attended historically Black colleges or minority-serving institutions and earn up to $125,000 should have all debt forgiven, according to Biden, and the schools would be made tuition-free for students whose families’ incomes are below $125,000.

Biden also plans to adopt Elizabeth Warren’s bankruptcy reform proposal, which would streamline the bankruptcy proceeding and allow people filing for bankruptcy to set aside funds for childcare and items like toys and books.
He also wants to expand worker protection rights and make it easier for workers to join unions without employers forcing them into mandatory meetings or impeding negotiations.

Biden is looking to eliminate private dollars from federal elections through a constitutional amendment, according to his website, which would require candidates to rely on public dollars alone for their campaigns. He’s also calling for a law that would keep foreign nationals from influencing American elections and create more transparency on election spending, so that an ad on Facebook would be required to disclose its donors.

On the infrastructure front, Biden will propose a $1.3 trillion plan over 10 years aimed at making American middle-class workers more competitive on a global scale, push the US to adopt more clean energy processes and grow the economy.

As to how these overhauls will be paid for, Biden said reversing Trump’s tax cuts will offset some of the costs of the plan.