Trump’s last-minute pardons include Bannon, Lil Wayne and scores of others 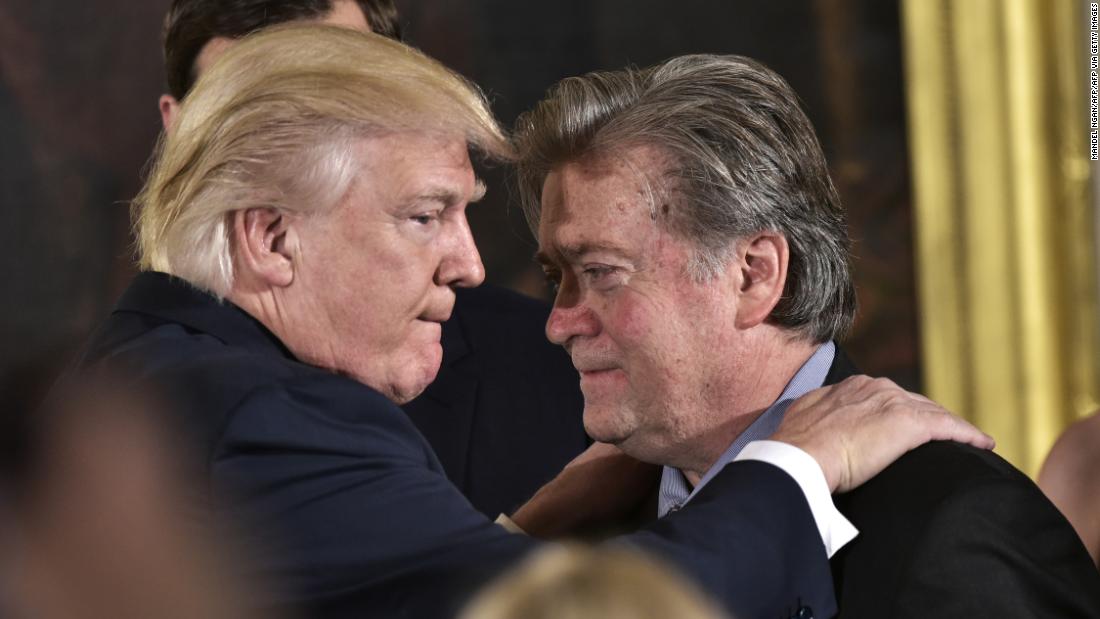 The batch of 73 pardons and 70 commutations issued in the final hours of his presidency was expected, and is in keeping with a long-standing presidential tradition of exercising clemency powers at the last minute.

The list reflected a President keen on awarding pardons to his stalwart allies, an unusual number of whom have been swept up in corruption or lying charges.

The vast majority of the pardons and commutations on Trump’s list were doled out to individuals whose cases have been championed by criminal justice reform advocates, including people serving lengthy sentences for low-level offenses.
But several controversial names do appear, including Steve Bannon, who has pleaded not guilty to charges he defrauded donors in a “We Build the Wall” online fundraising campaign. Trump had spent the past days deliberating over a pardon for the man who helped him win the presidency in 2016 and followed him to the White House. During his final hours in office there was a frantic debate underway behind the scenes on whether to grant Bannon a pardon.

One concern was Bannon’s possible connection to the January 6 riot of Trump supporters at the US Capitol, according to a source familiar with the discussions.

Over the course of Tuesday, Trump continued to contemplate pardons that aides believed were settled, including for his former strategist. The President continued to go back and forth on it into Tuesday night, sources told CNN.

Other names included Tuesday were Elliott Broidy, a former top fundraiser for Trump’s campaign who pleaded guilty to one count of conspiracy relating to a secret lobbying campaign to influence the Trump administration on behalf of a foreign billionaire in exchange for millions of dollars.

The rapper Lil Wayne received a pardon after pleading guilty to a gun possession charge in Miami. Another rapper, Kodak Black, received a commutation after he pleaded guilty to a weapons charge.

Bob Zangrillo, the Miami developer and venture capitalist charged in the Varsity Blues college admission scandal, also received a pardon. None of the other parents caught up in the probe were pardoned.

Though neither Trump or members of his family were included on his list, Trump has until noon on Wednesday to issue any final pardons before leaving office.

Trump’s final acts of clemency come after a scramble in recent days among criminal justice reform advocates and several White House officials to finalize the list and convince Trump to approve the actions. These pardons will undoubtedly be overshadowed by the slew of controversial ones Trump also issue in the same final batch on Tuesday.

While outgoing presidents typically issue pardons before leaving office, Trump has proven more willing to use his pardon power to brazenly reward political loyalty, the wealthy and well-connected and those who did not cooperate with special counsel Robert Mueller’s investigation.

The January 6 riots that led to Trump’s second impeachment have complicated his desire to pardon himself, his kids and personal lawyer Rudy Giuliani, and a source close to the process said those are no longer expected.

After the riot, advisers encouraged Trump to forgo a self-pardon because it would appear like he was guilty of something, according to one person familiar with the conversations. Several of Trump’s closest advisers have also urged him not to grant clemency to anyone involved in the siege on the US Capitol, despite Trump’s initial stance that those involved had done nothing wrong.

After weeks focusing on contesting the election and reeling from the fallout of the January 6 insurrection, Trump finally snapped back to attention on pardons in recent days, one source said.

“You couldn’t get the President to focus on this,” a source close to the process said of Trump in recent weeks. “And then this weekend, he didn’t have his Twitter, he didn’t have all these other distractions.”

Trump, who sank deeper into lame duck status in recent weeks, was reminded that his pardon power is one of the remaining undiminished aspects of his presidential power.

This source said Trump also resonated with cases in which individuals who went to trial got significantly more prison time than co-defendants who cooperated with law enforcement.

“I don’t think he likes when people get screwed just because they go to trial,” this source said.

Together, Kushner and Ivanka Trump worked with the White House counsel’s office and Justice Department while also working to convince Trump to support a series of clemency actions in the vein of criminal justice reform.

After meetings this weekend, Trump met again with his daughter, son-in-law and other White House officials on Monday to finalize the list of clemency actions.

Should Philip Rivers make the Hall of Fame? NFL experts debate his legacy with Chargers, plus the Colts’ future at quarterback