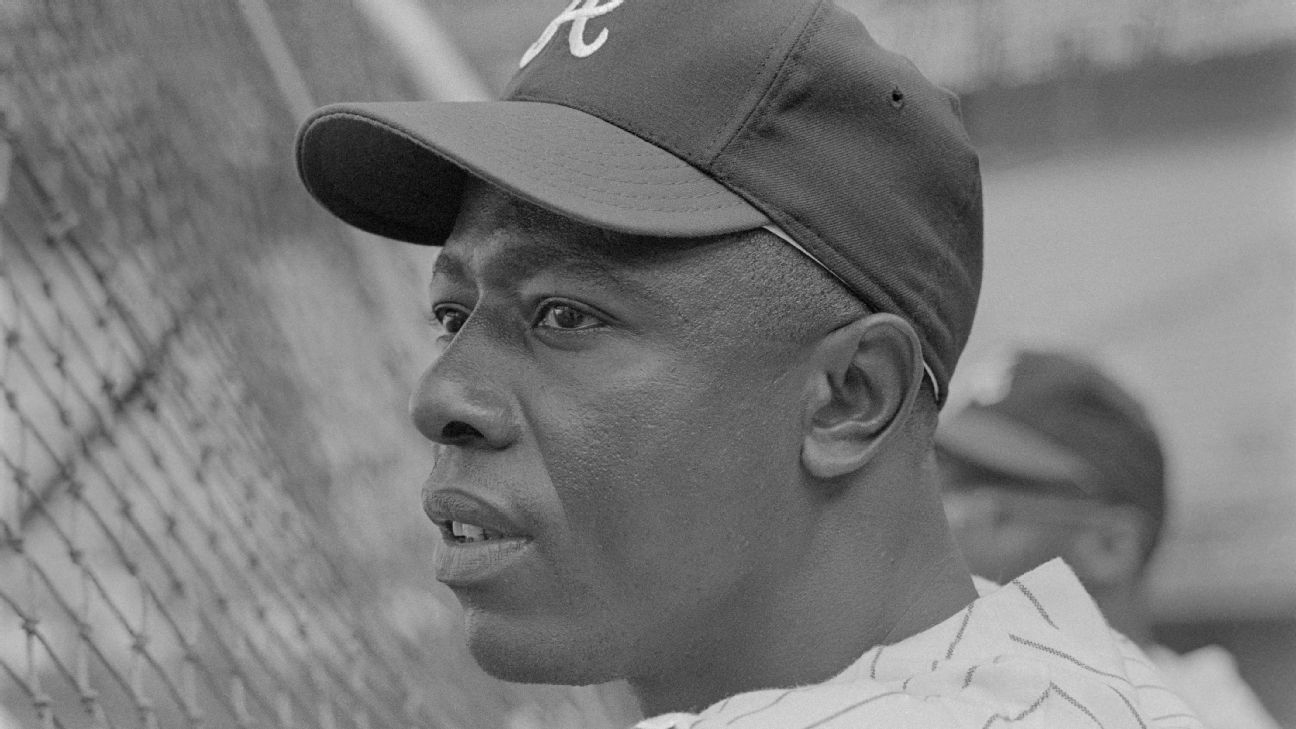 
Henry Aaron, who rose up from the depths of Southern poverty to become one of the towering figures in baseball history as well a bittersweet symbol of both American racial intolerance and triumph, has died today. He was 86.

He is still the career leader in total bases and RBIs and is third in hits behind Pete Rose and Cobb. He was the first player in baseball history to amass 500 career home runs and 3,000 hits and the last player in history to be promoted from the Negro Leagues to the major leagues. Aaron appeared in a record 24 All-Star Games, won batting titles in 1956 and 1959, led the league in home runs four times, was named National League Most Valuable Player in 1957, and twice appeared in the World Series, winning the title in 1957 when the Braves beat the New York Yankees in seven games.

Aaron was a magnificent player whose career paralleled more charismatic, spectacular players such as Willie Mays and Mickey Mantle, whose brilliance often overshadowed his prolific but workmanlike style, but it was his three-year pursuit of Babe Ruth’s career record of 714 home runs that elevated him into an enduring national figure. The record-breaking home run, which came in the fourth inning off Los Angeles Dodgers left-hander Al Downing on April 8, 1974, at Atlanta-Fulton County Stadium, provided one of the most lasting images in the sport and also one of its most poignant moments.

For years, Aaron had received thousands of letters, many of them racist, and many of which contained death threats against him and his family. The image of him rounding second base escorted by two jubilant white fans who had leaped onto the field became one of the most iconic in sports. Less known was that, as Aaron rounded the bases, his bodyguard, Calvin Wardlaw, sat in the stands, his hand secretly on his revolver, deciding in an instant whether the two young fans were hostile in their intent and whether he would shoot them.

Over the years, Aaron would be praised for his quiet resolve and dignity in the face of the threats. He would dine with international heads of state and every sitting president from Gerald Ford to Barack Obama, but the negative response from so many of his countrymen was a scar he would carry for the rest of his life.

“It was supposed to be the greatest triumph of my life, but I was never allowed to enjoy it. I couldn’t wait for it to be over,” he once said. “The only reason that some people didn’t want me to succeed was because I was a Black man.”

Aaron held the record for 33 years until Barry Bonds passed him on Aug. 7, 2007, and although he is currently second on the career home runs list, behind Bonds’ 762, the taint of the steroid era leaves Aaron in many people’s mind as baseball’s last legitimate home run champion.

Henry Louis Aaron was born Feb. 5, 1934, the third of eight children to Herbert and Stella Aaron, in Mobile, Alabama. When Aaron was 8 years old, the family moved to Toulminville, just outside of Mobile to a house built by Herbert Aaron made from leftover ship wood. As a boy, Henry recalled more than one occasion when his mother would have the children hide under their beds as the Ku Klux Klan marched down the street.

The Aaron legend was always centered on baseball. He was, as Ed Scott, the scout who discovered him, once said, “destined” to be a great ballplayer. But the limits of life as a Black person living in America, especially in the Deep South, were never far in the distance. When he was young, Aaron recalled telling his father he wanted to be a pilot; his father responded that that wasn’t possible because there were no “colored pilots.” He countered to his older brother, Herbert Jr., that he would then be a baseball player and play in the World Series, to which his brother said, “Ain’t no colored baseball players in the big leagues, either.”

It was in 1948, when Aaron was 14, that Jackie Robinson visited Mobile and Aaron saw his future. Robinson, Aaron would later say, was the blueprint he would follow. Robinson’s message was to study and receive an education first, and then think about baseball second.

Aaron never took Robinson’s advice. He had skipped school that day to see Robinson speak and eventually would be expelled from Central High in Mobile for truancy and transferred to the Josephine Allen School, a small private school nearby.

“There was no backup plan,” Aaron once said. “It was baseball or nothing. It had to work.”

In 1952, Aaron signed with the Negro League Indianapolis Clowns and, his talent obvious to the major league scouts scouring the final vestiges of Black leagues, lasted less than a month. Boston Braves owner Lou Perini signed Aaron, and his dynamic ascension began, from a year in Eau Claire, Wisconsin, to promotion to Jacksonville of the notoriously racist South Atlantic League in 1953. Without cameras or interest from the national media, it was Aaron, along with teammates Felix Mantilla and Joe Andrews, who integrated the hostile Sally League, with Aaron winning the MVP.

Aaron made his debut with the Braves as a 20-year-old in 1954, immediately impacting a rising young team and finishing fourth in the voting for Rookie of the Year honors behind Cincinnati’s Wally Moon. For the next six years, Aaron and third baseman Eddie Mathews combined to become the greatest slugging teammates in baseball history, and the Milwaukee Braves, only two years removed from relocating to the Midwest from Boston, would become one of the powerhouse franchises in National League history.

Aaron’s impact was immediate, but that did not insulate him from the often harsh racial attitudes from his teammates and the sporting press that made Aaron reticent to speak and resentful of the mainstream media. He absorbed insults from some teammates, most notably first baseman Joe Adcock, and the press more than once referred to him in print as “Stepinfetchit.” Unlike other Black stars such as Robinson, Mays, Roy Campanella and Ernie Banks, Aaron was not aided by the advantage of playing in a larger, more sophisticated city.

Nevertheless, he rose quickly, winning the 1957 pennant for the Braves on Sept. 23, hitting an 11th-inning home run off Billy Muffett of Cincinnati and hitting .393 in the World Series. Weeks later, he won his only NL Most Valuable Player award. The Braves suffered bitter defeats, losing the 1956 pennant to the Brooklyn Dodgers on the last day of the season, the 1958 Series to the Yankees in seven games after leading three games to one and the 1959 pennant to the Los Angeles Dodgers in a three-game playoff. Aaron would later reflect that those late-season losses kept Milwaukee from being remembered as one of the greatest teams of all time.

1959 was when Aaron produced perhaps his greatest season, winning his second batting title with a .355 average, 223 hits, 46 doubles, 39 home runs, 123 RBIs and 400 total bases yet finishing third in the MVP balloting behind Banks and Mathews, continuing what would a be trend of massive offensive output without much recognition.

Aaron was always known as a dangerous line-drive hitter whose legendary quick wrists created enough torque to also hit home runs. He was, before his 30th birthday, ahead of pace to break Cobb’s career hits mark, but before the 1963 season, with the Braves suffering from an aging core and fewer stars, Aaron made a conscious effort to hit more home runs. During the 1960s, the accepted narrative was that it was Mays who had the best chance to break Ruth’s record, but that began to change dramatically toward Aaron. By 1970, as the team had moved to Atlanta in 1966, it was clear that Aaron, and not Mays, had the best chance to challenge the career home runs record.

For the first time in a career overshadowed by Mays and Mantle and Banks, the national spotlight focused on Henry Aaron. Wary of the South and its racist practices, Aaron had been reluctant about the Braves moving from Milwaukee to Atlanta and was outspoken about his desire not to return to the region of his roots, fears that were assuaged by his involvement in the civil rights movement and friendships with the Atlanta Black political establishment. His personal life had changed as well — with a divorce from Barbara, his wife of 18 years — but Aaron astounded teammates with his focus. Aaron responded by hitting 203 home runs between the ages of 35 and 39, including a career-high 47 in 1971. In 1972, Aaron signed the richest contract in baseball history at the time: three years, $600,000. Aaron remarried in 1973, finished the 1973 season with 713 home runs, one shy of Ruth, and obsessed the entire winter that he might be assassinated before the 1974 season began.

When the record finally fell, Aaron finished the season with the Braves, but the pursuit of Ruth had exhausted him. He was 40 years old but wanted to continue playing. The Braves traded him to the Milwaukee Brewers after the 1974 season, reuniting him with the city in which he began his career and with his friend Bud Selig.

Two substandard seasons with the Brewers told him to quit. As a member of the Brewers, Aaron’s 755th and final home run came on July 20 off Dick Drago of the California Angels.

Aaron was elected to the Hall of Fame in 1982, on 406 of 415 ballots. His 97.83 induction percentage was the second highest in history then, behind only Ty Cobb, and today is ninth all time. For years in retirement, Aaron felt disconnected from the game, embittered both that he felt the game did not appreciate him or his achievements and by baseball’s slow and often stalled progress in minority hiring. He had integrated the front office in baseball when the Braves made him the first African American farm director in baseball history. He had clashed with baseball in the 1980s, especially during the Al Campanis scandal, which underscored his belief that baseball was not serious about promoting African Americans into managerial or front-office positions.

It wasn’t until the mid-1990s and the promotion of Selig to baseball commissioner that Aaron returned to the game. He had been an executive with the Braves since Ted Turner hired him in 1977, but it was under Selig that baseball made a conscious effort to celebrate Aaron, who Selig felt had been underappreciated. In 1999, the 25th anniversary of Aaron’s breaking Ruth’s record, Selig created the Hank Aaron Award dedicated to honoring the best offensive player in each league.

UFC 257 — Party with J.Lo, dinner with Bono and the inside stories of Conor McGregor