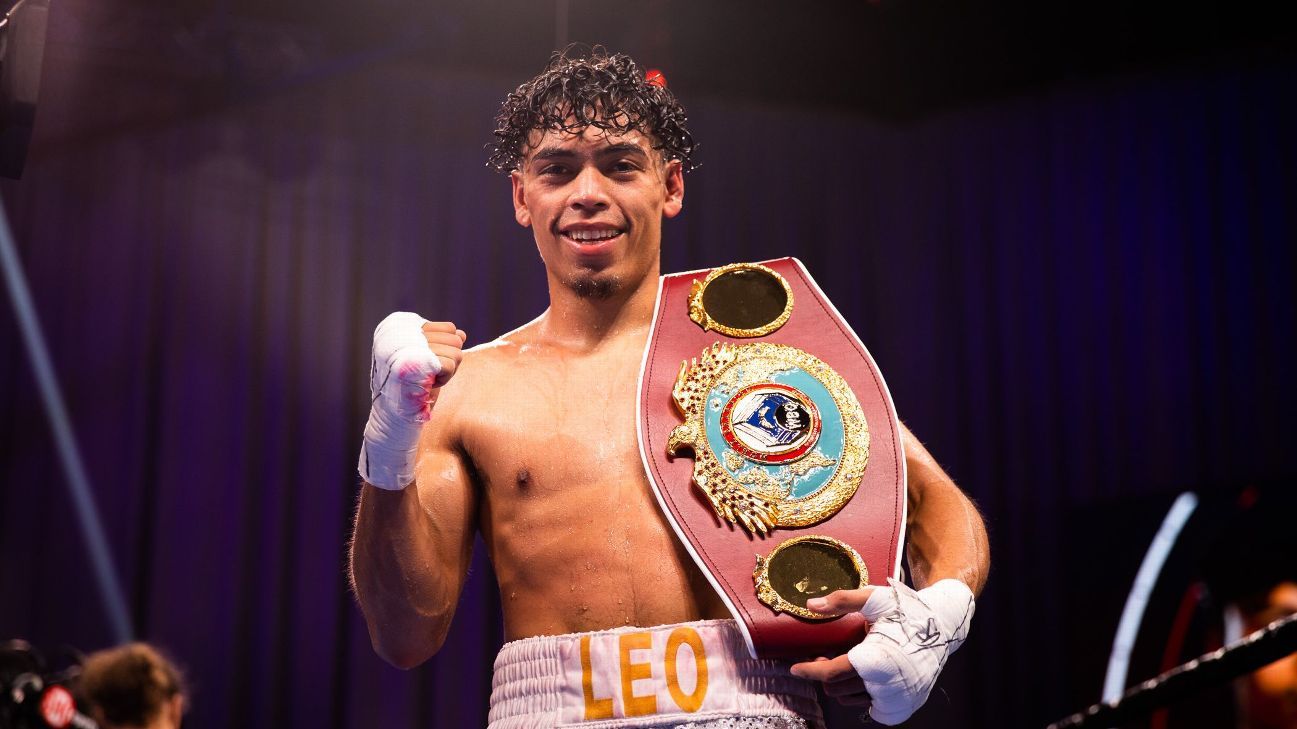 
After spending most of 2020 waiting for their WBO junior featherweight world title fight, titleholder Angelo Leo and Stephen Fulton were weeks away from finally squaring off against each other before the year landed one final sucker punch.

Granted, in a year dragged down by a pandemic, it came as little surprise. But the punch was devastating nonetheless.

Leo tested positive for COVID-19 just weeks before he was set to defend his belt against Fulton. Fulton knew exactly how Leo felt, because he too had tested positive earlier in the year — postponing the fight from its original August date.

Finally, with both men healthy, they will step into the ring Saturday night at the Mohegan Sun Arena in Uncasville, Connecticut, in a fight with major career implications for the two previously unbeaten boxers. Leo (20-0, 9 KOs) and Fulton (18-0, 8 KOs) are about to find out what kind of fighters they are, after both battled the virus. Fulton feels fortunate that despite suffering through the effects of COVID, he came out feeling OK on the other side.

“Things like that play a major role in your fight game because I know the damage that can be caused,” Fulton told ESPN.

Fulton’s case was easily the more severe between the two of them. Fulton knew his body was messed up toward the end of July but didn’t know what exactly was ailing him. Then he tested positive, which nixed the Aug. 1 bout against Leo for the then-vacant WBO title.

While the symptoms lasted a couple of weeks, Fulton reflected on his approach to life while battling the virus, which ultimately sidelined his career for three months. Before testing positive, he opted to put problems off instead of tackling them head-on, but he says his perspective has changed.

“Anything that goes on outside of boxing affects you in the ring because you’re taking all of that with you,” Fulton said. “So by me even wanting to better myself and deal with my problems, that just changes my mindset moving forward with fighting and dealing with my opponents at a different approach.”

That new approach altered his path towards Leo the second time around. Leo also did things a little bit differently as he spent his second camp training for Fulton by sparring with future Hall of Famer Nonito Donaire a handful of times. He also worked on his strength and conditioning.

What makes Saturday’s fight truly compelling is where both 26-year-olds are at this point in their careers.

Leo and Fulton are still ahead of their primes. The winner of the bout will have a solid case to be considered one of the best junior featherweights in the world. According to the odds at Caesars Sportsbook by William Hill, this is one of the most competitive title fights on the docket thus far in 2021. And interestingly enough, Leo, the defending champion, is the slight underdog (+125).

“It’s no surprise to me,” Leo told ESPN. “So with this being said, it just gives me more fuel to the flame, honestly. Because now I want to prove [to] everyone that I belong as a champion and I’m a champion for a reason.”

It’s a fitting matchup given the bevy of young, rising fighters willing on big challenges at the risk of losing their undefeated records. Fulton explained there’s no fear for him, because he’s taken that risk before, after facing undefeated fighters such as Top Rank prospect Joshua Greer Jr. earlier in his career.

Fulton and Leo have waited for this fight long enough. With the virus behind them, fight night can’t come soon enough.

“It’ll be a year since I fought,” Fulton said. “That’s the longest I’ve gone without fighting. Oh, I can’t wait to get back in there.”

In their own words

“I’m not surprised at all that Vegas has Fulton as the slight favorite. I know that he has a lot of supporters. I’ve been an underdog before. I’ve been in these shoes before, so it’s no surprise to me. It just gives me more fuel for the fire. I’m not at all offended that he’s the favorite. This is boxing and Fulton is a good fighter, but I’m looking to prove on January 23 that I’m where I belong and that I’m world champion for a reason.” –Leo

“To me, it means everything to be a world champion from Philadelphia. This is what I’ve been working for my whole career. To my city, it would show people from my neighborhood that there’s a way out. But I don’t feel any pressure because of it. This sport teaches us the discipline to perform in moments like this. The pressure is just a part of my job.” — Fulton

“Being champion is something that I always wanted to be so now that I have the belt, I have the confidence I need. But I don’t take my foot off the gas just because I’m champion. They say that once you’re champion, it’s actually harder. As bad as you want it, now everybody else wants it just as bad as you do. My mentality is the same now that I’m world champion and I’m gunning for more world championships. I’m not the hunted. I’m still hunting.” –Leo

“I am that next wave and I’m just ready to stamp it by getting this belt. I’m going to solidify what everyone already knew about me. I have the superstar quality in me and I’ll show it in this fight.” –Fulton

Despite the fact that Saturday’s card at Mohegan Sun only features three fights, the stakes are fairly high across the board. Leo vs. Fulton isn’t the only junior featherweight title fight on the card, as 30-year-old Ra’eese Aleem takes on 28-year-old Victor Pasillas.

Aleem (17-0, 11 KOs), a Michigan native, was actually set to fight Williams in August before Williams replaced Fulton in the main event title fight against Leo. Aleem gets to fight for gold of his own on Saturday as he and Pasillas fight for the vacant WBA interim junior featherweight title. Pasillas (16-0, 9 KOs), who hails from California, won in his PBC debut back in September and had a long amateur career that featured victories over current world titlists (and 2012 US Olympians) Jose Ramirez and Joseph Diaz.

In the opening bout of the night, Rolando Romero (12-0, 10 KOs) defends his WBA interim lightweight title against Justin Pauldo (14-1, 7 KOs). Romero, a 25-year-old from Las Vegas, won that title against Jackson Marinez at Mohegan Sun back in August, on the David Benavidez-Roamer Alexis Angulo undercard. Pauldo, 26, hasn’t lost since July 2015 and most recently fought in August 2020 as well.

Bernie Sanders’ mittens are sold out