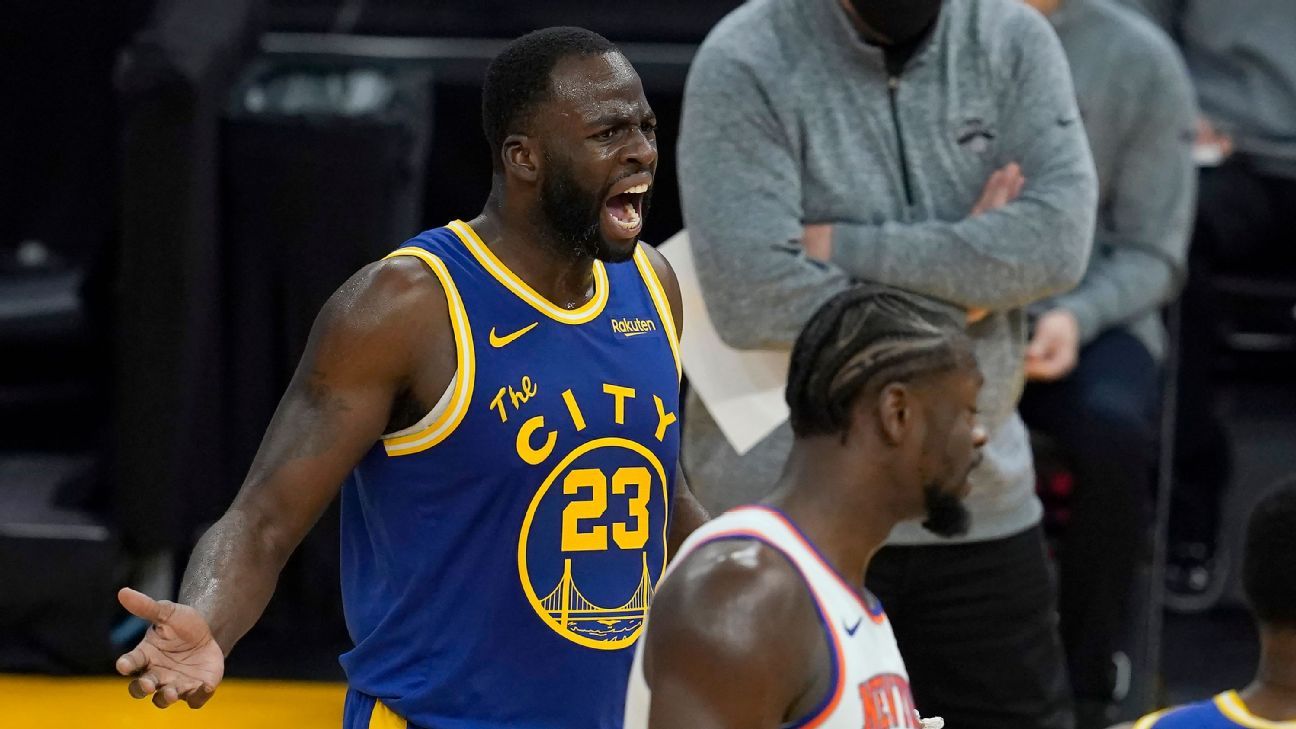 Warriors coach Steve Kerr said after the game that Ben Taylor — the game’s crew chief — admitted at halftime that second-year official John Butler thought Green was yelling at him and made a mistake by giving the forward his second technical foul.

Green, who picked up his first technical of the game with 4 minutes, 2 seconds left in the first quarter after arguing too long with the officials, received his second with 1:04 left in the second quarter after turning the ball over on a pass directed to Wiseman.

On his way back down the floor, Green’s voice boomed through a near-empty Chase Center as he appeared to air out his frustration at the rookie. When the whistle was blown and Green was assessed his second technical, Kerr and several members of his staff tried to explain to the officiating crew that Green’s ire was directed at the rookie center.

But after listening to Green bark at various points throughout the night, hearing his frustration one more time apparently was enough, in the officials’ minds at the time, to warrant an ejection.

“At halftime Ben Taylor came out and told me that it was a mistake,” Kerr said. “That John Butler didn’t realize that Draymond was yelling at his teammate. He thought he was yelling at him.”

Steve Kerr says the crew chief told him that the second technical on Draymond Green was a mistake and the other referee thought he was yelling at him.

Green pointed to Wiseman and tried to explain what had happened as Warriors star guard Stephen Curry pleaded his own case. But after a few more seconds, Green walked back to the Warriors’ bench and high-fived teammates on his way to the locker room. Wiseman dejectedly walked to the other end of the floor after the whistle blew before realizing Green had been ejected.

Speaking to a pool reporter after the game, Taylor said the technical was assessed for “profanity that was deemed to be directed at the official.” Taylor said they did not consider rescinding the foul after hearing the team’s explanation.

For his part, Green was surprised that the officials didn’t overturn the call.

“I’m just a bit confused,” Green told Marc J. Spears of The Undefeated. “Officials can meet and make a decision on any call throughout the game, but when it comes to a technical that was clearly the wrong call, due to an official assuming I was talking to him when in fact I wasn’t, that can’t be overturned? Maybe it’s time to take a look at that rule. I would love clarity on why that’s the rule, if in fact it is a rule.”

Curry also wanted clarity on whether officials could review an ejection in the future under similar circumstances.

“It’s pretty self-explanatory,” Curry said of the questionable second technical. “He’s been very vocal with James. I know he had already gotten a tech early in the game and obviously mindful of that, he was just talking to his teammate. The refs got confused. And I don’t know what the rules are in that situation when it’s pretty clear who he was talking to, and I don’t know if you can take it back in the moment, but it was pretty glaring that he was talking to his own teammate and kind of unfortunate that it got confused, so move on.”

Green has repeatedly praised Wiseman for the talent he has shown throughout various points in the season, but his propensity for getting upset at the rookie has been clear at different points in games. The same kind of exchange happened after a Green turnover in Wednesday night’s win over the San Antonio Spurs; Green yelled at Wiseman that he wasn’t in the right position on the floor.

Wiseman acknowledged after Thursday’s game that he “messed up on the play,” which led to the Green turnover. Like many inside the Warriors’ locker room, he was surprised Green was ejected.

“Really just because I was trying to get a post up, but [Green] threw it too early,” Wiseman explained. “And just one of those moments where he was like “Catch the ball!” or something like that. But that’s all really. I don’t understand the situation, like why the ref did that, but I guess it’s basketball. But I was confused myself as well. … That was kind of weird. That was a weird moment.”

After the game, Kerr did not want to harp on the incident with Green, instead focusing on his team’s poor defensive play.

“Obviously, Draymond is one of our best and most impactful players, so it hurt us,” Kerr said of the ejection. “But we were playing very poorly to that point anyway, so I’m not going to talk about the officiating, I’m going to talk about our poor play. … We’re undisciplined, and we got to find a way to defend without fouling, obviously.”

This was Green’s 11th career ejection, good for third most in the NBA since he made his debut in 2012. Only DeMarcus Cousins (13) and Markieff Morris (12) have more during that span.

Curry was asked whether Green’s reputation as a player who regularly argues with officials impacts the way he is officiated, especially by younger officials.

“The reason you’re asking that question is probably because there is a bias,” Curry said. “But that can’t be part of how you officiate the game. We’re all grown men out there, and you have to be able to ref the game that you’re reffing in that moment, so I don’t know if that played a part in how tonight went. Only John, only he can answer that question. But again, you got to just move on. We can talk about it all we want to, it’s not going to change anything.”