The unstoppable Kobe Bryant, as told by the defenders tasked with stopping him 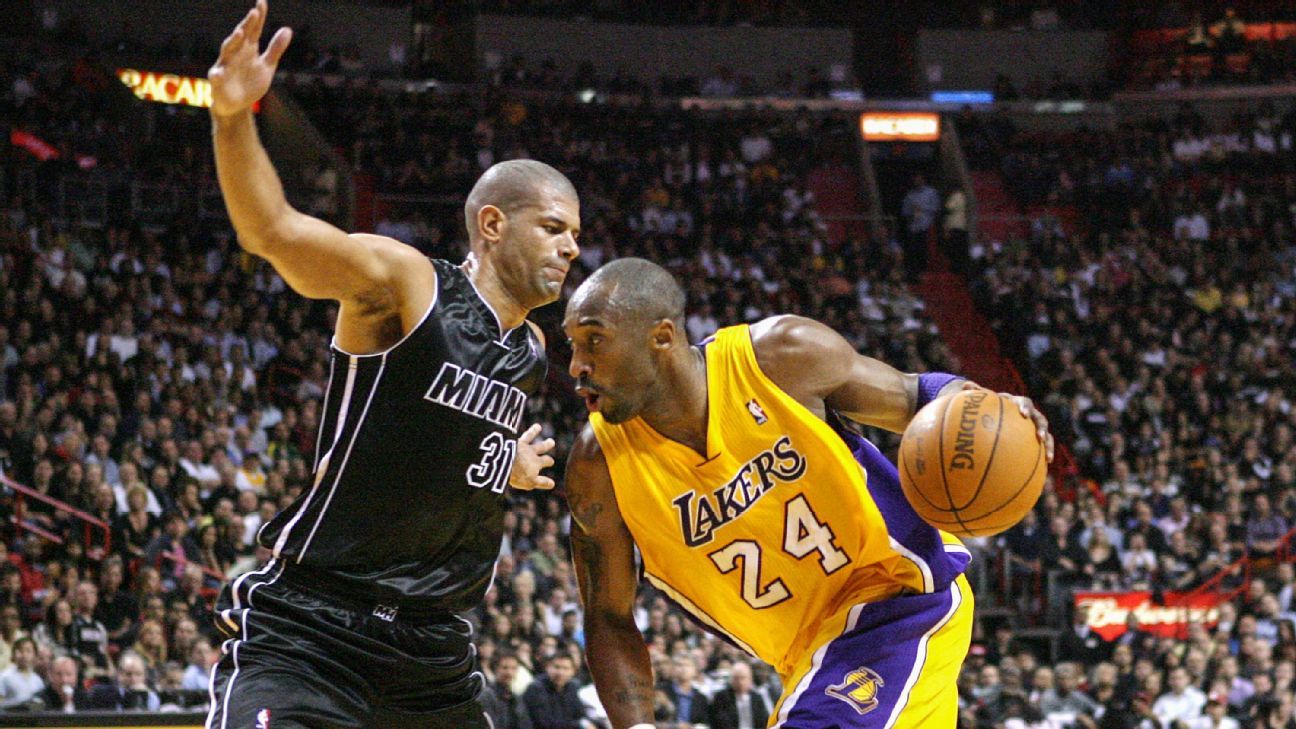 
DURING A STORIED 14-year NBA career, Tony Allen was named to six All-Defensive teams and earned the nickname “The Grindfather” for his abilities as one of the league’s most hard-nosed perimeter defenders.

“I was definitely hyped,” Allen told ESPN. “I had Paul Pierce in my ear telling me, ‘Get ready! You stick me every day [in practice]. You should be ready. Let’s go! That’s Kobe Bryant!'”

The No. 25 pick in the 2004 draft was trying to soak everything in and get himself in the right frame of mind for the 54th game of his young NBA career.

“I’m trying to be tough and telling myself, ‘I’m not scared,'” Allen said.

Meanwhile, he was drenched in sweat, his palms and underarms sweating so profusely he had to change his warm-up shirt. When Allen finally got on the floor against Bryant, he realized what he was up against.

The Los Angeles Lakers won the opening tip and quickly got the ball to Bryant in isolation on the right wing. Allen got down in his defensive stance and reached out with his left arm to keep track of Bryant.

Bryant swung the ball past Allen’s extended arm, drawing a foul and going to the free throw line just 16 seconds into the game. Less than two minutes later, the scene repeated itself: Allen, the inexperienced rookie, finding himself with no choice but to foul Bryant, then a three-time NBA champion.

“I fouled out in eight minutes,” Allen said. “I was a deer in headlights.”

Exactly 11 months after getting the best of Allen, Bryant recorded the magnum opus of his 20-year career, an 81-point performance against the Toronto Raptors that ranks second in NBA history, behind only Wilt Chamberlain’s 100-point masterpiece in 1962.

Allen was one in a long line of defenders — some elite, some less so — who were tasked with stopping the unstoppable. In advance of the 15th anniversary of Bryant’s 81-point game, several of them sat down with ESPN to discuss the monumental task that stood in front of them every time they faced Bryant’s Lakers.

“When you saw him on the calendar,” Allen said, “you know you had sweaty palms.”

THE BLACK MAMBA is considered the fastest, most athletic and deadliest snake in the world. The way it can cut, turn, elevate and evade attempted predators is second to none.

The black mamba is relentless. It is in absolute control of every aspect of its attack. Every maneuver is completely calculated.

“[Kobe] wanted to kill everyone on the court,” said Metta Sandiford-Artest, the 2004 NBA Defensive Player of the Year, who was often tasked with shutting down Bryant before becoming his teammate for five seasons. “It didn’t matter if you were the worst player or the best player on the opposing team.”

Shane Battier knew that feeling well. The two-time NBA champion was twice selected as a member of the NBA’s All-Defensive team. In his prime, he was known as an elite defender who took pride in his intense preparation — which was taken to another level when facing Bryant.

“Everyone in my family or my friends knew, don’t mess with me the day before or the day of a Kobe game,” Battier said. “You never knew if this was the night where he decided, ‘You know what? I’m going to embarrass the guy guarding me’ — which I think he tried to do a lot.”

During the 2007-08 season, Battier and his Houston Rockets went on one of the more improbable winning streaks in NBA history. Despite missing stars Yao Ming and Tracy McGrady for long stretches, Houston had won 21 consecutive games when Bryant and the Lakers rolled into town on March 16. “Kobe was coming to Houston to end the streak,” Battier said. “Pau [Gasol] was out that game. So I was like, ‘Oh, Lord. This dude is going to shoot the ball 40 times.'”

Not quite. Bryant shot the ball just 33 times.

NBA fans will remember that as the “hand in the face” game. Battier had used the technique for most of his career, dating back to his All-America days at Duke. But that game against Bryant is where it gained fame.

“Kobe, he left it all out there,” Battier said. “I’ve never been as tired as I was after that game.”

Bryant scored 24 points, but the Rockets came out victorious. It was one of the lower-scoring performances for Bryant in his 37 regular-season meetings against Battier. He averaged 28.6 points in those games, including a trio of 50-point performances. Bryant was such an intense competitor, Battier decided the best course of action was to use that against him.

“All I wanted to do was push that button enough to say, ‘You know what, Kobe’ — without actually telling him, because we never talked trash — ‘try to beat the hand in the face.’ And mostly he did.”

Bryant took the smallest slight as motivation. Knowing that, Battier tried a different approach than his contemporaries.

“You go through time, whether it was Raja Bell, Ruben Patterson or any of the alleged ‘Kobe stoppers,’ and it became a one-on-one machismo contest,” Battier said. “I’m a tough guy, but I’m not tough like those other guys. So I did the opposite. I almost tried to play like Eeyore [from Winnie the Pooh]. Any time I had a good game against Kobe, I’d go out and say, ‘You know, he just missed shots. I’m a lucky guy.'”

AFTER HIS DISMAL performance in his first showdown with Bryant, Allen vowed that kind of embarrassment would never happen to him again. His preparation became central to his defensive prowess. Especially when he knew he would be facing Bryant.

“I had that tunnel vision,” Allen said. “I was focused strictly on Kobe.

“Every time I knew I was going to play him, I would go home after practice, I would eat and rewind tapes of his moves. Wake up in the morning, stretch and watch more film.”

Lakers legend Kobe Bryant, his 13-year-old daughter, Gianna, and seven others died in a helicopter crash on Jan. 26, 2020.

• Kobe’s careers as No. 8 and No. 24
• MacMullan: Kobe’s infinite complexity
• Lowe: Inside what made Kobe great
• The longest flight in Lakers history

At one point, he felt he might have found a rhythm to the Black Mamba’s mannerisms.

The two ended up facing each other 24 times in the regular season and 10 more in the playoffs, splitting those meetings 17-17 (and splitting their Finals series meetings 1-1). Despite knowing what was coming, Allen admitted that Bryant was still very successful scoring against him, averaging 25.8 PPG in their head-to-head meetings.

“He would hit a shot and the coaches would be shaking their heads at me,” Allen said. “My reaction was, ‘Yo! You come out here and try to guard him!'”

JALEN ROSE HAS has heard all the jokes about the 81 points. He even made a commercial about it. But ask him and he’ll tell you that the Raptors were actually successful that day.

“When people try to tease me, I say, ‘We held him under a hundred,'” Rose said with a laugh.

What sticks most with Rose from that game isn’t the sheer number of points scored but Bryant’s reaction to putting up a number no one has come close to since.

“When you go back and watch that game, he wasn’t running around the court doing airplane wings, thumping his chest or pointing at the sky,” Rose recalled. “As a matter of fact, he didn’t say a word.”

Slowing down Bryant on a random Sunday in January was tough enough. But what about when the calendar turned to April, May and June?

“Playing him in a playoff series, that was a different animal,” Battier said. “Every playoff game feels like you played a season. There was no better challenge.”

Rose had a front-row seat to see the legend of Kobe Bryant skyrocket during the 2000 NBA Finals, and he nearly altered the course of Bryant’s career. Less than nine minutes into Game 2 of the Lakers’ series against the Indiana Pacers, Bryant was isolated on Rose on the left wing. The then-21-year-old Lakers star pulled up for a jump shot, and Rose slid his foot into Bryant’s landing zone — a play that is now by rule a flagrant foul.

“One of the things that happened in my career, I don’t think it’s cute or am I proud of it,” Rose said. “I came from an era where you did whatever it takes to win. We also realized very quickly we couldn’t guard him. This dude is something different. So I acted like I was contesting the jump shot and purposely made him come down on my foot. In my mind, I didn’t want him to break his ankle. But I wouldn’t mind if he missed the next few games because we would have a better chance to win.

“In true Kobe fashion,” Rose continued, “this dude only missed one game.”

WHEN TAKING THE court against Bryant, opponents never knew which version of Kobe they were going to see on a given night. Sometimes he would be distant, ice-cold. No pleasantries would be exchanged. Other nights, he’d be playful, in a joking mood. He’d fraternize with you, then light you up for 50.

“That was the mental game we played with each other,” Battier said. “I never tried to engage him.”

Allen said he preferred it when Bryant kept his distance before tipoff. It helped him stay focused on the task at hand. Other times, a cordial Bryant would lure his opponents — Allen included — into a trap.

“He’d come out sometimes and say, ‘What’s up, baby boy?’ That’s a layup,” Allen lamented. “He had a few games like that and he busted me upside my head.”

“Don’t fall for that! He’s just trying to butter you up,” Rose added.

That was the dichotomy Bryant presented as an opponent.

“As dynamic and with the finesse Kobe can play with, most people probably don’t think he can get grimy,” Allen said. “That dude right there, he’ll get an offensive foul and throw an elbow right in your nose or neck.”

Allen paused and smiled before adding, “He was the most confident, cocky and arrogant player. He knew he was the greatest player. I wanted to compete with that mentality.”

It took that kind of mentality to stare down the Black Mamba.