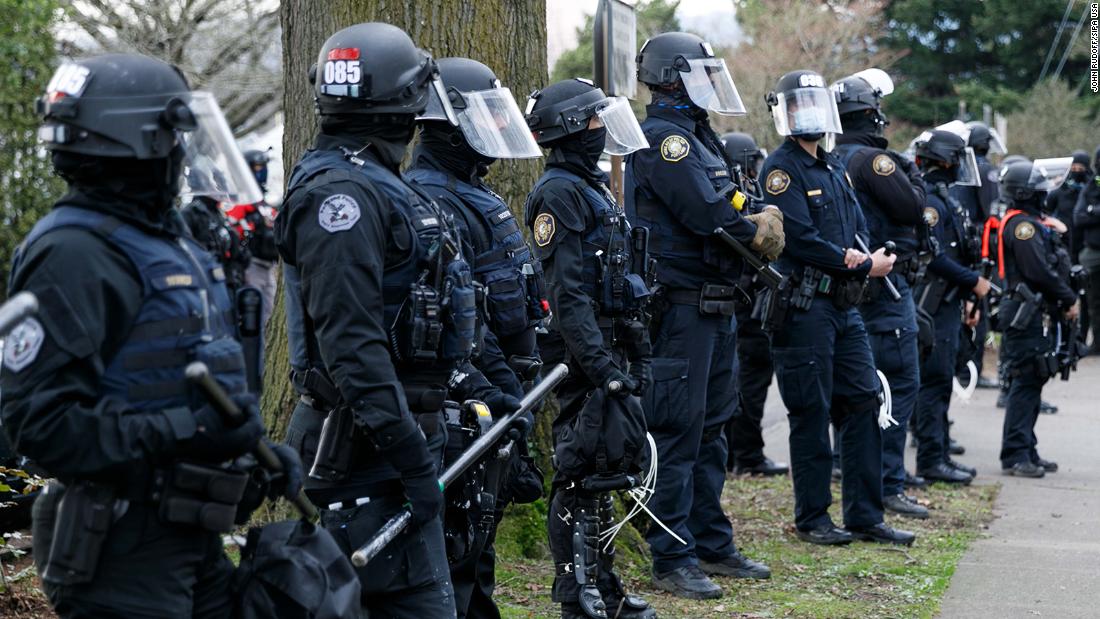 “We wanted to symbolize that both parties are the oppressor,” said a 25-year-old protester who wished not to be identified, fearing government reprisal. “We’ve all experienced firsthand that police violence is police violence regardless (of which political party holds power). … It doesn’t make a difference to the person being beaten.”

“For White people, maybe they feel there’s time to let the administration work, but for Black and Indigenous people who have had a rope around their neck, there is no time,” the protester said. “There’s no justice, so there is no peace.”

Biden in his inaugural speech Wednesday called for racial justice and unity in America, acknowledging the nation has been deeply divided by systemic racism and political forces. He denounced White supremacy and domestic terrorism and said the country must be healed.

“A cry for racial justice, some 400 years in the making, moves us,” Biden said. “The dream of justice for all will be deferred no longer.”

Still, protesters wearing all black clothing and gas masks took to the streets Thursday in Portland, where social justice demonstrations have endured for months. Protesters there a day earlier had vandalized the state Democratic Party headquarters and a federal US Immigration and Customs Enforcement, or ICE, building, police said, and four people have been charged in connection with those events.
CNN witnessed more arrests on Thursday night, when most people attending a protest at the ICE building were White. Indeed, the demographic of Portland’s protest movement has often been criticized. Protesters say it should be neither surprising, given that the city is 77% White, nor disparaged.

“I want to dispel that White anarchists are co-opting this for their own gain,” said the 25-year-old protester, who is White and told CNN he’s lived in Portland for most of his life. “There are Black and Indigenous people out there that can’t have the same outward action as White people can.”

Some protesters’ anger is fueled by their assumption the Biden administration won’t take up their key demands: abolishing ICE and defunding the police, a concept that can range from reinvesting police resources in marginalized communities to disbanding forces altogether, they told CNN.

“There is a lot of anger and rage” over social inequity among Americans, protester Alix Powell told CNN. And vandalism is how some people express their anger, she said.

“There’s a lot of hopelessness in people my age and people I know who feel like no matter how you vote, no matter what you do, they’re not listening,” she said Thursday. “A riot is the language of the unheard.”

National Black leaders are counting on the new President to unify the county and enact policies that address the disparities Black people face in housing, education, jobs, health care and voter suppression, they have said. They also want Biden to undo the harm caused by President Donald’s Trump offensive rhetoric toward people of color and refusal to address police brutality in the Black community.
Among the first three executive orders Biden signed on Inauguration Day was one meant to ensure racial equality and support underserved communities. Biden also has assembled the most racially diverse presidential Cabinet in US history. His Department of Homeland Security has paused deportations for 100 days, with some exceptions. And on Friday, he’s set to sign executive orders that expand aid to low-income Americans.

Portland’s many months of protests

As in cities across the country, protests erupted in Portland late last spring over the death of George Floyd at the hands of Minneapolis police and expanded to include demands for police accountability and prosecutorial reform in the cases of Breonna Taylor, Ahmaud Arbery, Elijah McClain and other Black victims.
The events have ranged from peaceful Black Lives Matter marches to violent demonstrations including arson and vandalism. Some have become a target for hate groups seeking to antagonize those who come out to defend the rights of marginalized communities.

Oregon’s complicated racial tensions trace to the time of the nation’s founding. As late as 1854, the Oregon Constitution was amended with exclusionary language to keep Black people out of the state, according to a timeline published by Portland city officials.

The 14th Amendment, giving citizenship to Black people, passed there in 1868, two years after Congress approved it.

But it wasn’t until the 1950s that Oregon began peeling back laws and rules that propped up racial discrimination in housing, schools and employment.

Is Cristiano Ronaldo soccer’s all-time top scorer? Or is it Pele? Josef Bican? We may never know for sure