Why do presidents use so many pens to sign documents – and what happens to them? 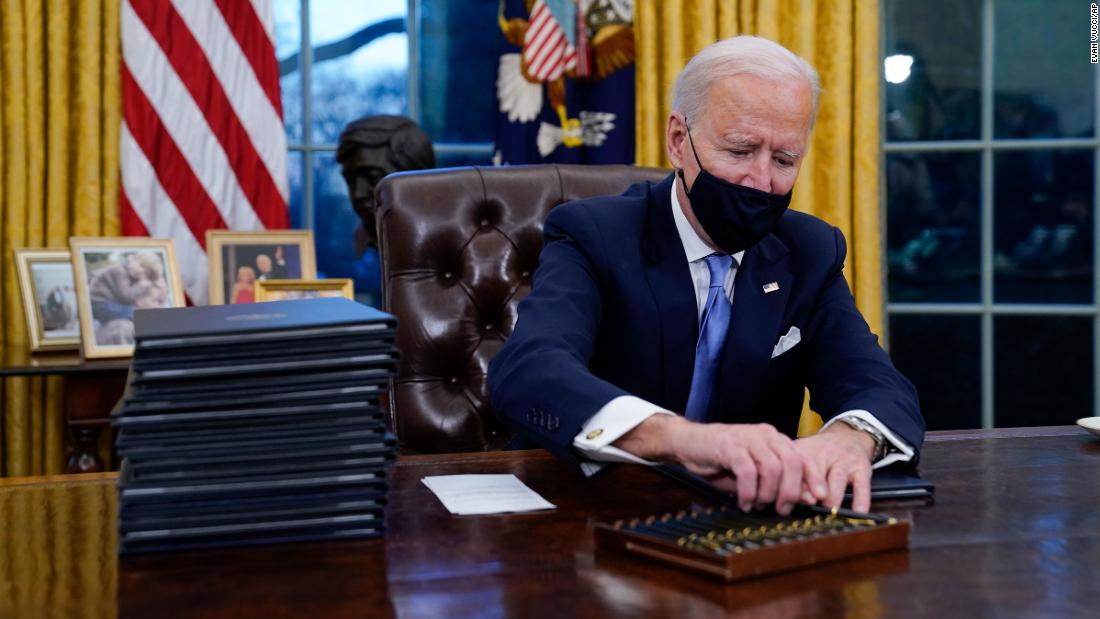 Inside that box, ready for use, lay a neat row of gold-trimmed navy Cross Century II pens.

But why so many pens? As Biden continues to sign more executive orders — 17 on Wednesday alone, and 13 more in the days following — it raises a question: Is one not enough?

Well, like everything to do with the White House, it’s mainly because of tradition.

It’s not clear which president started using multiple pens to sign single pieces of legislation. But historians do know the tradition stretches across decades. After the pens are used, they are typically handed out to those involved as a sort of historical artifact.

It’s a way to share the spotlight and acknowledge the contributions of others, explained Mark Lawrence, the director of the Lyndon B. Johnson Presidential Library.

“I think that presidents want to share credit with others who’ve contributed to the issues in play,” he said.

One of the most famous examples of this is when Johnson signed the Civil Rights Act in 1964. He reportedly used at least 75 pens to sign the landmark legislation, handing them out to those involved.

But the pens weren’t just given out of benevolence. The first pen used to sign the CRA was given to Everett Dirksen, a Republican Senator from Illinois who helped write the act. The move was a politically shrewd one, Lawrence explained. Because Dirksen was on the other side of the aisle, the gesture might create a sense of loyalty to Johnson, and maybe Dirksen would speak favorably of him to his Republican peers.

“It’s a small gesture, no doubt,” Lawrence said. “But a very characteristic one for a skillful politician like (Johnson) to lose no chance to cultivate loyalty and support.”

The second pen, he said, went to Hubert Humphrey, his vice president. Martin Luther King Jr. was also among the recipients.

And if you’re wondering how it’s possible to use that many pens, you can watch the video footage — Johnson seemingly uses a new pen for each letter. The signatures may have gotten a little elaborate at times, in an effort to use all the pens, Lawrence predicted.

But the pens weren’t just given out at signing ceremonies. After Johnson signed the Tax Bill in 1964, he brought four of the pens used in the signing to Jacqueline Kennedy, according to a diary entry from Johnson’s wife, Lady Bird Johnson. One pen was for Kennedy, one for the John F. Kennedy Presidential Library and Museum and one each for her children, Caroline and “John-John,” she wrote.

A more modern example is when President Barack Obama signed the Affordable Care Act into law in 2010, using 22 pens in the process.
And Obama had practice. In 2009, when he signed the Lilly Ledbetter Fair Pay Act — the very first bill he signed into law — he used seven pens.

“I’ve been practicing,” he quipped at the time. “Very slowly.”

As he signed, he gave the pens out as gifts, including to Ledbetter herself.

Of course, it’s not just the number of pens that matters, but the type.

Biden, for example, reinvoked tradition by using a Cross pen, specifically the Cross Century II, according to manufacturer A.T. Cross.

Former president Donald Trump initially used the Century II felt tip pen, but then — like so many facets of his presidency — broke with tradition, instead preferring a Sharpie.

As for Johnson, Lawrence said he began his presidency using an old fashioned fountain pen, but he transitioned in 1965 to using a felt pen instead — probably a less messy choice.

And having a good pen is important. In a diary entry dated Feb. 20, 1952, President Harry Truman wrote that he had to sign his name on letters and official documents about 600 times a day, said Randy Sowell, an archivist at the Harry S. Truman Presidential Library and Museum. Across four years, well, that’s a lot of signatures.

documentspensPresidentssignusWhy do presidents use so many pens to sign documents - and what happens to them? - CNN
0
Share