Bernie Sanders’ mittens are sold out 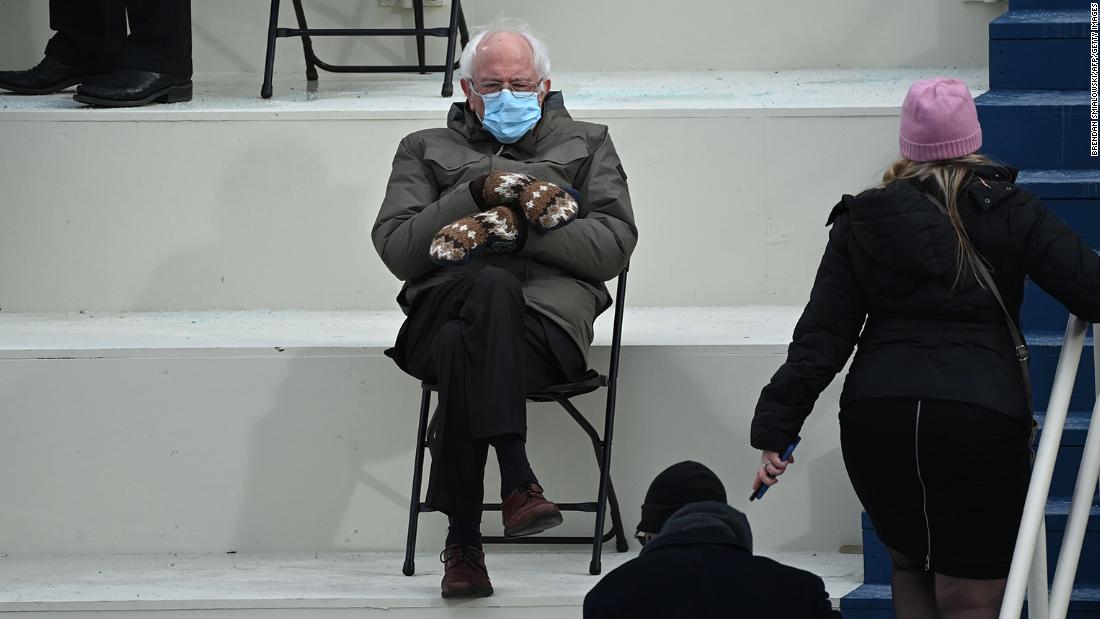 “Thanks for all the interest in Bernie’s mittens!” Jen Ellis wrote on Twitter. “I’m so flattered that Bernie wore them to the inauguration. Sadly, I have no more mittens for sale. There are a lot of great crafters on ETSY who make them.”
A few years ago, Ellis, who teaches second grade, gave the Vermont senator the patterned, hand-knit “smittens” — part mittens, part sweater — on the campaign trail. But she didn’t expect he’d start wearing them at high-profile events like the inauguration. The mittens are made from repurposed wool sweaters and lined with fleece made from recycled plastic bottles, she said in a tweet last year.
The image is also being sold on T-shirts, mugs and as a $25 bobble head. Some sellers on Etsy are already touting “Bernie inspired” mittens. Last year, online merchants cashed in on the fly that buzzed on former Vice President Mike Pence during the debate against Kamala Harris. The Biden campaign sold more than 35,000 fly swatters with the slogan, “truth over flies,” a play on the campaign’s slogan “truth over lies.”
Ellis couldn’t be reached for comment, but she told the Jewish Insider that “there’s no possible way I could make 6,000 pairs of mittens, and every time I go into my email, another several hundred people have emailed me.”

“I hate to disappoint people, but the mittens, they’re one of a kind and they’re unique and, sometimes in this world, you just can’t get everything you want,” she told the news site.

The virality and levity of the Bernie meme is reminiscent of more carefree days of the internet. As one Twitter user captured it, “The Bernie Sanders memes and photoshops are what the world needs right now.”
This isn’t the first time the mittens have been in the spotlight either. Last year, Sanders wore them to the Women’s March in Portsmouth, New Hampshire; some called them “oven mitts” and a dedicated Twitter account, @BerniesMittens, was born. At the time, Ellis said she was “humbled by the support” and “what started out as a simple act of kindness more than 2 years ago has grown into something beyond my imagination.”

She added: “This mitten frenzy is really distracting me from getting my mid-year report cards done.”

In a statement to CNN on Thursday, Sanders said the meme this week “makes people aware that we make good mittens in Vermont. … We have some good coats as well.”