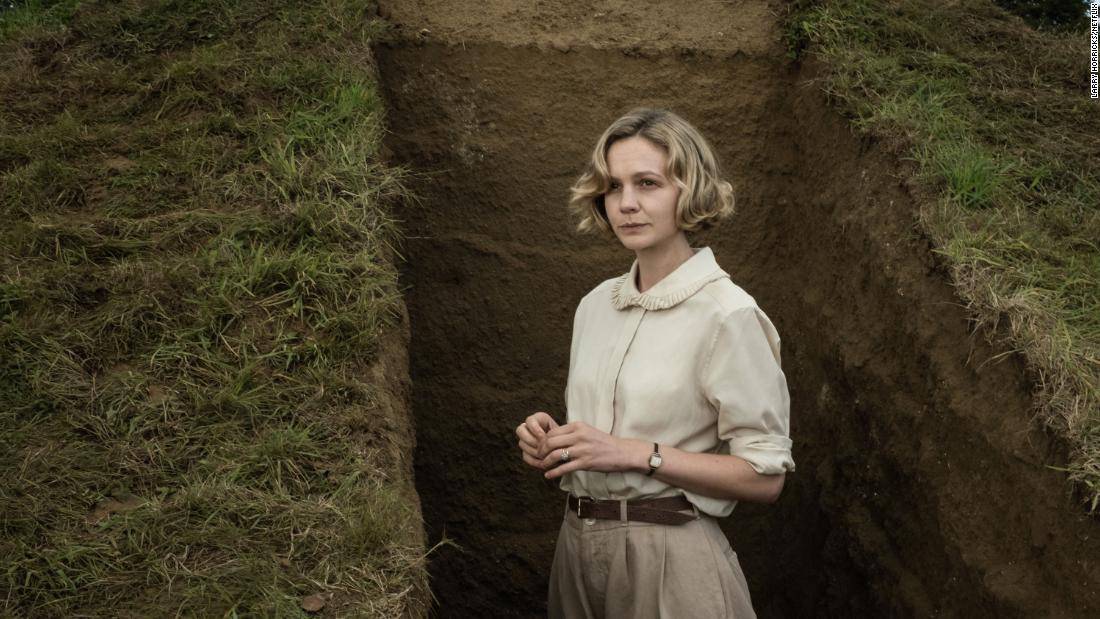 Keeping you in the know, Culture Queue is an ongoing series of recommendations for timely books to read, films to watch and podcasts and music to listen to.

Caches of unopened sarcophagi found in Egypt. Eight miles of Ice Age rock paintings discovered in the Amazon rainforest. An intricate Roman mosaic floor excavated in northern Italy. These are just some of the major archaeological finds of the past year.

If you are endlessly fascinated by these discoveries, Netflix’s new movie “The Dig,” a historical drama starring Carey Mulligan and Ralph Fiennes, should pique your interest.

Based on a true story, “The Dig” retells the story of how a widow and a self-taught archaeologist unearthed an Anglo-Saxon burial ship on a private plot of land in Suffolk, UK, in 1939. The incredible find, which occurred as the specter of World War II loomed over Europe, became one of country’s most important treasures and helped dispel the notion that the British Isles were culturally and economically siloed during the Dark Ages.

“The film is about time and the fragility of our existence,” said screenwriter Moira Buffini, who adapted the script from John Preston’s book of the same name, in a video interview. “It’s about the brevity of life and what endures — what we leave behind us.”

In the movie, Mulligan plays Edith Pretty, a landowner and mother whose husband has died from cancer. Though part of her life has been taken from her and returned to the ground, the earth gives her something in return.

Wide shots in “The Dig” show a recreation of the site where an 89-foot-long burial ship left an imprint underground. Credit: Larry Horricks/Netflix

Pretty has a hunch about the two large mounds on her land, which is rumored to be a Viking burial site. After she hires Basil Brown, played by Fiennes, to assess and excavate the site, they discover the remains of an 89-foot ship from the 7th century.

“We’re digging down to meet the dead,” Pretty tells Brown in one scene.

As the movie recounts, the wooden boat buried at Sutton Hoo had rotted away entirely, though it left a well-preserved imprint in the dirt, like the fossil of a great beast. Inside was a chamber filled with hundreds of valuable artifacts, including an ornate iron helmet, an intricate golden belt buckle and lavish goods from the Byzantine Empire and Middle East, shining a light on the trade and cultural exchange that took place.

A photograph of the real Sutton Hoo location in Suffolk, taken in 1939 upon its discovery. Credit: ANL/Shutterstock

The vessel had seemingly been used for a ship burial, whereby large boats were used as tombs for important figures. But there was no trace of the man, presumed to be Anglo-Saxon royalty, who had been buried with the ship.

“I read the coroner’s report on the king,” said Buffini. “They found nothing: not a tooth, not a hair, nothing of his body. Everything had turned into dust, sand and earth. And yet, you get a feeling of … the whole society of Europe from what’s buried in that boat with him.”

The most famous treasure of the cache is this full-faced iron helmet. Edith Pretty donated all of the artifacts to the British Museum. Credit: Georgie Gillard/ANL/Shutterstock

Though the ship’s remains are a ghostly presence in “The Dig,” the movie focuses on the human stories behind its discovery. Each character grapples with the things they will leave behind, from their physical possessions to their wider legacies.

“If we were to go now, what would be left?” Buffini recalled the characters asking one another. The screenwriter believes such a question can shift our perspective. “Everything in you resists the march of time,” she said. “And I think it makes you live more fully in the moment.”

“The Dig” is available to stream on Netflix.

READ: “The Dig” by John Preston

The Netflix movie is based on this 2007 novel, which recreates the summer following the discovery of the Sutton Hoo treasures from the perspective of three people at the heart of the find.

WATCH: “Secrets of the Saqqara Tomb”

In 2019, Egyptian archaeologists discovered a massive cache of mummified animals, including cats and snakes, in the Saqqara necropolis outside Cairo. This documentary follows a team of experts as they explore the tomb, which had gone untouched for over 4,000 years.

A still image from documentary “Secrets of the Saqqara Tomb.” Credit: Netflix

Set in a mysterious world of endless rooms and hallways filled with mutable ocean tides, the novel’s protagonist, Piranesi, explores his alternate reality through the thousands of enigmatic statues lining its corridors and the strange ephemera left behind by unknown visitors.

LISTEN: “The Archaeology Show”
This podcast, hosted by archaeologist Chris Webster and academic April Kamp-Whittaker, explores various themes in their field, from dispelling myths about Cleopatra to examining the latest archaeological finds, such as last year’s discovery of the world’s oldest known yarn fragment.
WATCH: “Time Team: Saxon Burials on the Ridge”

Over the course of 20 seasons, the archaeologists on British television’s “Time Team” encountered their fair share of Saxon burial grounds. In this episode from Season 11, the team investigates what might be a 5th-century cemetery hidden beneath a field.