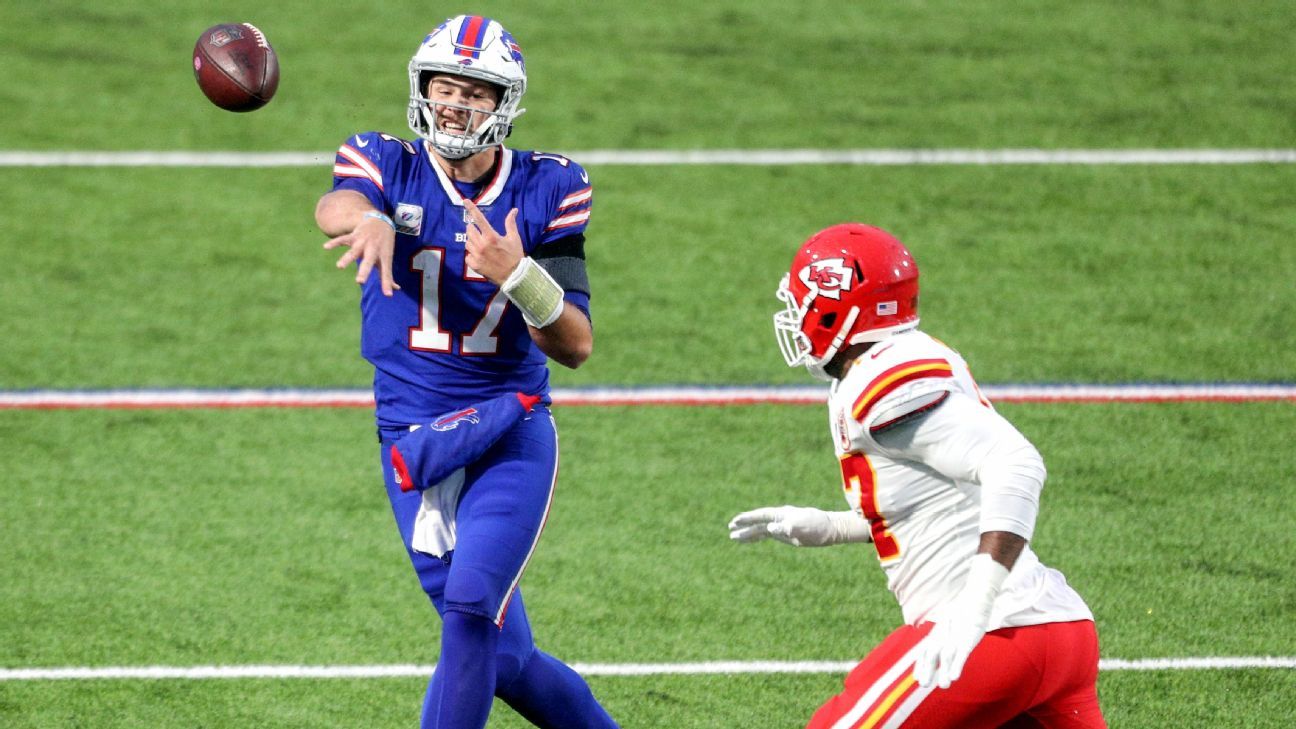 The conference championship games of the NFL playoffs have arrived, with both kicking off on Sunday. The fifth-seeded Tampa Bay Buccaneers will face the top-seeded Green Bay Packers in the NFC Championship Game, and then the No. 2-seeded Buffalo Bills will play the No. 1 Kansas City Chiefs in the AFC Championship Game. The winners advance to Super Bowl LV on Feb. 7.

We’re previewing both title games. Our NFL Nation reporters bring us the keys to the games, a bold prediction for each matchup and final score picks.

Additionally, ESPN Stats & Information provides a stat to know for each game and the Football Power Index (FPI) goes inside the numbers with a matchup rating (on a scale of 1 to 100) and a game projection. ESPN Chalk’s Dave Bearman hands out helpful nuggets, and NFL analyst Matt Bowen points out a key matchup to watch as well. It’s all here to help get you ready for an exciting weekend of NFL playoff football.

What to watch for: If there has been anything to gripe about in Matt LaFleur’s highly successful two-year run as the Packers’ coach, perhaps it is being a step slow to adjust. When these teams met in Week 6, the Bucs played zone coverage on 61% of quarterback Aaron Rodgers’ dropbacks, and Rodgers had his only multi-interception game this season. And in general, the more teams have played zone against Rodgers over the past two years, the better they have fared. LaFleur and offensive coordinator Nathaniel Hackett know what’s coming in terms of coverage, and how they plan for it will dictate their level of success against a tough Tampa Bay defense. — Rob Demovsky

Bold prediction: Buccaneers quarterback Tom Brady’s game-winning touchdown pass will not be thrown to wide receivers Mike Evans, Chris Godwin, Antonio Brown (out) or Scotty Miller, tight ends Rob Gronkowski or Cameron Brate, or running backs Ronald Jones II or Leonard Fournette. Nope, it will go to wide receiver Tyler Johnson. The rookie fifth-round pick out of Minnesota had just one catch last week against the Saints, but that 15-yard spinning grab on the perimeter was masterful. The only reason we aren’t talking about Johnson more is the depth chart he’s buried on. He has a knack for making difficult catches in high-pressure situations, and he’ll do again on Sunday. — Jenna Laine

Stat to know: The two biggest factors in Brady’s performance all season have been pressure and the vertical game. In 13 wins over the course of the season (including playoffs), he averaged 1.1 sacks per game, saw pressure on 14% of his dropbacks and posted an 82 QBR. But in five losses, sacks jumped to 2.2 per game, his pressure rate climbed to 27% and his QBR nearly split in half (44). And as far as the deep ball goes, consider this: On passes thrown 20-plus yards downfield over that 18-game span, he has hit on 45% for 11 touchdowns and zero interceptions in wins, but just 21% for a single score and five picks in the losses.

Bowen’s matchup key: How will Tampa Bay keep Packers wide receiver Davante Adams in check? It’s going to start at the line of scrimmage in Cover 1, with Buccaneers cornerback Carlton Davis trying to use his length and physical traits to disrupt Adams’ release. If he can’t, Davis’ lack of recovery speed versus Adams’ sudden ability to separate will spell trouble for the Bucs. Read more.

What’s at stake: A win for the Buccaneers would mark the first non-division champion to reach the Super Bowl since the 2010 Packers. It would also bring Brady’s 10th Super Bowl appearance, spanning three decades. Rodgers, however, has played in only one Super Bowl. And after losing his past three NFC Championship Game appearances and going 1-3 over his career in this game, Rodgers is attempting to avoid becoming just the third QB to have fewer than two wins and more than three losses in conference title matchups (Ken Stabler and Donovan McNabb are both 1-4).

Betting nugget: Brady is 9-4 straight up and 6-7 against the spread in conference championship games. The under is 8-5 in those matchups, including 7-2 in his past nine. Read more.

Domonique Foxworth predicts who will have a bigger day in the NFC Championship Game between Tom Brady and Aaron Rodgers.

Home crowd: Last week’s playoff game at Lambeau Field had an attendance of 8,456. With potentially more guests of players and coaches from both teams in the stadium this week, expected attendance is in the ballpark of 8,500-9,000. That’s roughly 10-11% of the 81,441 capacity at Lambeau.

Matchup must-reads: Finally, Rodgers vs. Brady: Inside the playoff matchup 13 years in the making … ‘Too much information’ never enough for Packers’ dominant offense … Crowning achievement: Packers receivers prove worthy once and for all … Bucs have beaten Rodgers before, but does the formula change? … Rodgers not feeling extra pressure, says his future is ‘beautiful mystery’ … Bucs head into NFC title game without WR Brown

What to watch for: Chiefs quarterback Patrick Mahomes says he has cleared concussion protocol and is set to play on Sunday, a huge boost to the Kansas City offense. But the Chiefs’ run game will also be something to keep an eye on. Kansas City rushed for a season-high 245 yards against Buffalo in Week 6, when the Bills played their safeties deep on many snaps and were determined not to let Tyreek Hill and other receivers beat them deep. They will certainly change strategies this time, but at what cost? The Chiefs got just one pass play of more than 22 yards against the Bills the last time around. Can the Bills effectively slow the Chiefs’ running game while still limiting the number of big pass plays? — Adam Teicher

Bold prediction: Bills quarterback Josh Allen will surpass 350 passing yards and wide receiver Stefon Diggs will turn in his third straight game with 100 receiving yards and a touchdown. And a little bolder, the Bills will not only win but also thoroughly outpace the Chiefs in their own backyard, punching Buffalo’s first ticket to the Super Bowl since the 1993 season. — Marcel Louis-Jacques

Stat to know: The Bills have dropped back to pass 73% of the time this postseason, and only one team has ever reached a conference title game passing more often — the 2015 Patriots (83%), who lost in the AFC Championship Game that season. Buffalo won last week with just 32 rushing yards — the fourth fewest ever in a playoff win, per the Elias Sports Bureau — and Allen currently leads the team on the ground with 57 yards over two postseason games. The Bills averaged 64.0 rushing yards per game this season, fewer than all but one team to ever reach the Super Bowl; the 1999 Rams averaged 41.0.

Bowen’s matchup key: Watch for the Chiefs’ defense to show pressure and spin late to play Cover 2 “robber,” with safety Tyrann Mathieu as the middle-hole defender. This allows the Chiefs to make Allen work post-snap with late movement, but it also allows Kansas City to play zone coverage with Mathieu lying in the weeds as a middle-of-the-field presence, in position to steal an in-breaker. Read more.

What’s at stake: The Chiefs are aiming to become the first repeat Super Bowl champs since the 2003-04 Patriots, ending the longest stretch in NFL history without a repeat champion. They are the 12th defending Super Bowl champion to host a conference championship, and the prior 11 teams went 10-1 (only loss was by the 1990 49ers). The Bills, meanwhile, are trying to make it back to the Super Bowl for the first time since losing four straight across the 1990-93 seasons. They haven’t won a title of any kind since the 1965 AFL Championship, and their 0-4 record in Super Bowls is tied with the Vikings for most appearances without a win.

Rob Ninkovich says it’s key for the Bills to get pressure on Patrick Mahomes.

Home crowd: The Chiefs have kept their attendance numbers at or below 22% capacity at Arrowhead Stadium (76,416 total capacity) this season, with their biggest crowd coming last week against the Browns (16,730). Expect a similar number at the AFC Championship Game.

Matchup must-reads: Bills can justify trading Mahomes pick by reaching Super Bowl … For Chiefs’ Reid, ‘every down is a throwing down,’ even on fourth-and-1 … How serious is Davis’ ankle injury? Biggest questions heading into the AFC title game … Mahomes says he’s cleared concussion protocol, cleared to play Sunday