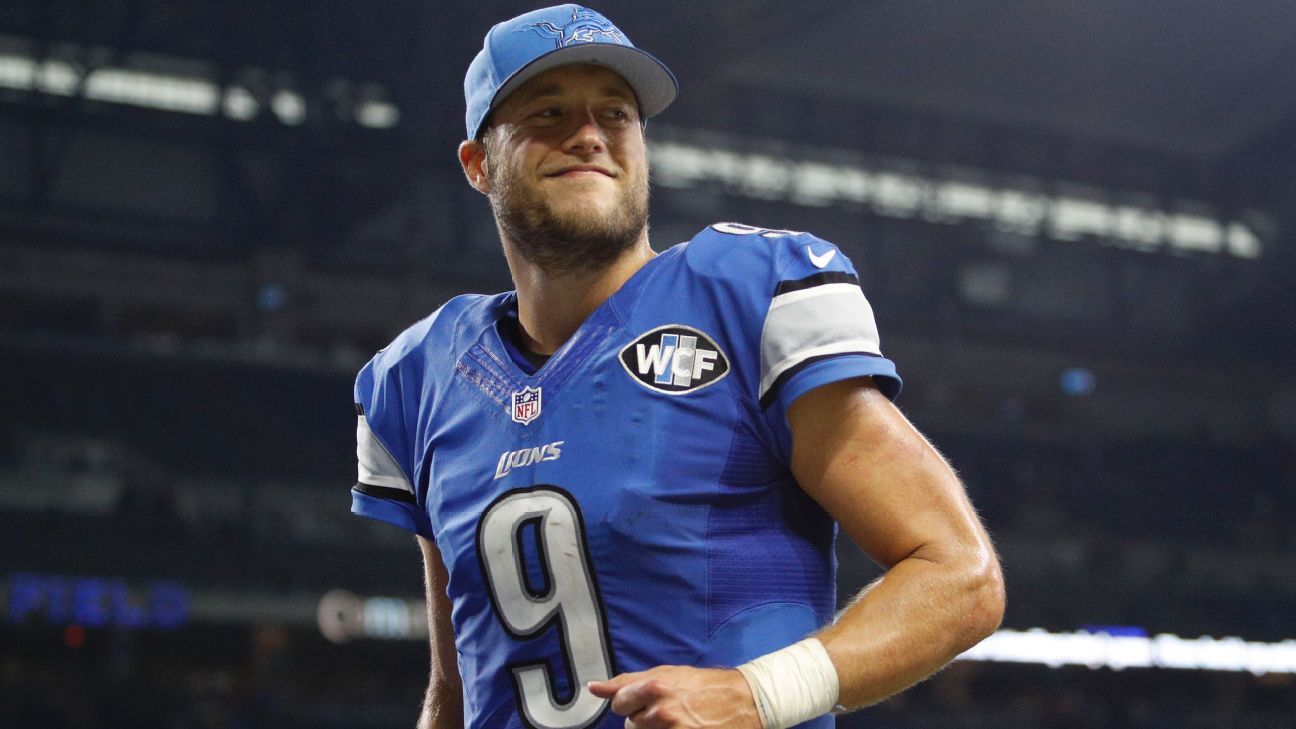 
ALLEN PARK, Mich. — Matthew Stafford gathered his team in a huddle before its Week 17 home game against the Minnesota Vikings, doing what he had done so often before in his career with the Detroit Lions. As he did, it’s not clear if he knew then that this would likely be his last game in Detroit.

“Whatever you got left in the f—ing tank today, let’s go,” Stafford said in a video published later on the team website.

QB Matthew Stafford urges on his teammates in Week 17 pic.twitter.com/3c4Qx7e

It felt like that’s just what Stafford did in Detroit: He made the Lions competitive. Every game, every season, he gave Detroit everything he had. You saw it in his battered body, with busted-up fingers, a broken back on more than one occasion, bruised ribs and massively taped ankles.

How he handled Week 17, playing through injuries to his ribs, thumb and ankle, perhaps should have been a clue it could have been the end. Same with his multiple embraces with Marvin Jones, an unrestricted free agent, and hugs on the sideline.

In many ways, the game epitomized what Stafford had always done for the organization: He tried to play whether he was hurt or the team was losing or when it felt like he was the only thing holding the squad together.

Stafford transformed in Detroit. He came in as the No. 1 overall draft pick in 2009, fought through injuries in his first two seasons and became one of the league’s most durable, dependable quarterbacks. He came into a franchise that had gone 0-16 the season before and relied solely on All-Pro wide receiver Calvin Johnson for success.

He leaves the Lions as the best at his position in franchise history and with a team that clearly had become his over the past six years. He set NFL records for the fastest quarterback to reach 15,000, 20,000, 25,000, 30,000 and 40,000 yards. He also registered almost every franchise record for a quarterback.

When he retires, his name will undoubtedly end up plastered with other Lions legends inside Ford Field.

It’s almost hard to remember a time at this point without Stafford. And so often he was underappreciated in Detroit for his durability and his skill. The Lions didn’t win as much as they would have liked with him, but far too often that was not his fault.

Too often, Detroit had subpar running games and porous defenses to be complimentary to what he could bring offensively. Yet it still felt like with Stafford, even if the team had holes in so many other places, Detroit had a chance.

“You play this game to go out there and play in big-time moments, and we didn’t do a good enough job this year as a team to make sure that we have those opportunities this late in the season,” Stafford said before the season finale against Minnesota. “That’s obviously disappointing and something you want to rectify as a player, as a teammate, as a part of an organization.”

His desire to play in “big-time” games rarely materialized into actual success. He made the playoffs three times, losing all three wild-card games. During the past three seasons in Detroit, under Matt Patricia, the franchise wasn’t even close to the big time.

For so long, Stafford had been the quarterback who had said the right things and never complained, never questioned and always said he wanted to be in Detroit. To win in Detroit. And he meant it too. He played through three head coaches — Jim Schwartz, Jim Caldwell and Patricia — and four offensive coordinators — Scott Linehan, Joe Lombardi, Jim Bob Cooter and Darrell Bevell.

He turned from a deep-ball gunslinger to a quarterback completing 64% or more of his passes in each of the past six seasons. Stafford holds every important passing record in franchise history, and he became one of the game’s best comeback leaders.

When Johnson retired after the 2015 season, Stafford got better. He spread the ball around to other talented pass-catchers — Golden Tate, Marvin Jones, Kenny Golladay and T.J. Hockenson. He found a way to distribute better and become more consistent.

As those who he came in with and played with for so long — Johnson, Nate Burleson, Dominic Raiola, Rob Sims — retired, Stafford and long-snapper Don Muhlbach became the veteran voices.

It was more than just the players. Stafford and his family created connections throughout Detroit. Each Christmas, they would surprise families who had a rough year by taking care of all of their Christmas gifts — something he found great joy in. Inside the locker room, he treated everyone with respect, from his star receiver to the equipment guys who prepare his footballs every week. This season, he was one of the leaders of the team’s movement on social justice and wrote a poignant first-person essay for The Players Tribune about why he decided he needed to speak up.

He never sought credit or accolades for these things — if it wasn’t for the Instagram of his wife, Kelly, no one might have known about most of it.

For as much as he was a star and one of the highest-paid quarterbacks in the NFL, Stafford tried to just continue living a regular life. The majority of his non-football friends are the ones he’s had since high school in Dallas or college in Georgia. He’s the rare player who isn’t on social media — and never really had an interest in it.

“Most loyal person ever,” his childhood best friend, Pan Lucas, told ESPN in 2016. “That’s just, loyal is a very good way to describe him. He’s going to be there for ya.”

For over a decade, Detroit was privy to that, too. The Lions were his team. Stafford wanted to win in Detroit, the only NFL team he had known. That was his preference for more than a decade.

He badly wanted to fulfill what the Lions had drafted him to do back in 2009, when he was a fresh-faced kid taking over the reins of a franchise beleaguered for decades. And he almost did it, too.

That he suggested it was perhaps time for both sides to move on isn’t Stafford giving up or walking away. It’s the reality of football life. Of after 12 years of trying, the acknowledgment that for both sides, maybe it’s not working out so well anymore.

Indeed, a fresh start might be necessary. Detroit has that with a new general manager, head coach, coordinators and, as long as the Lions get fair value, quarterback. Stafford will, potentially, be sent to a team set up to win.

And so will conclude an era not quite as successful as either side had hoped for but, as time moves on, will likely be remembered fondly as Stafford walks out the door.