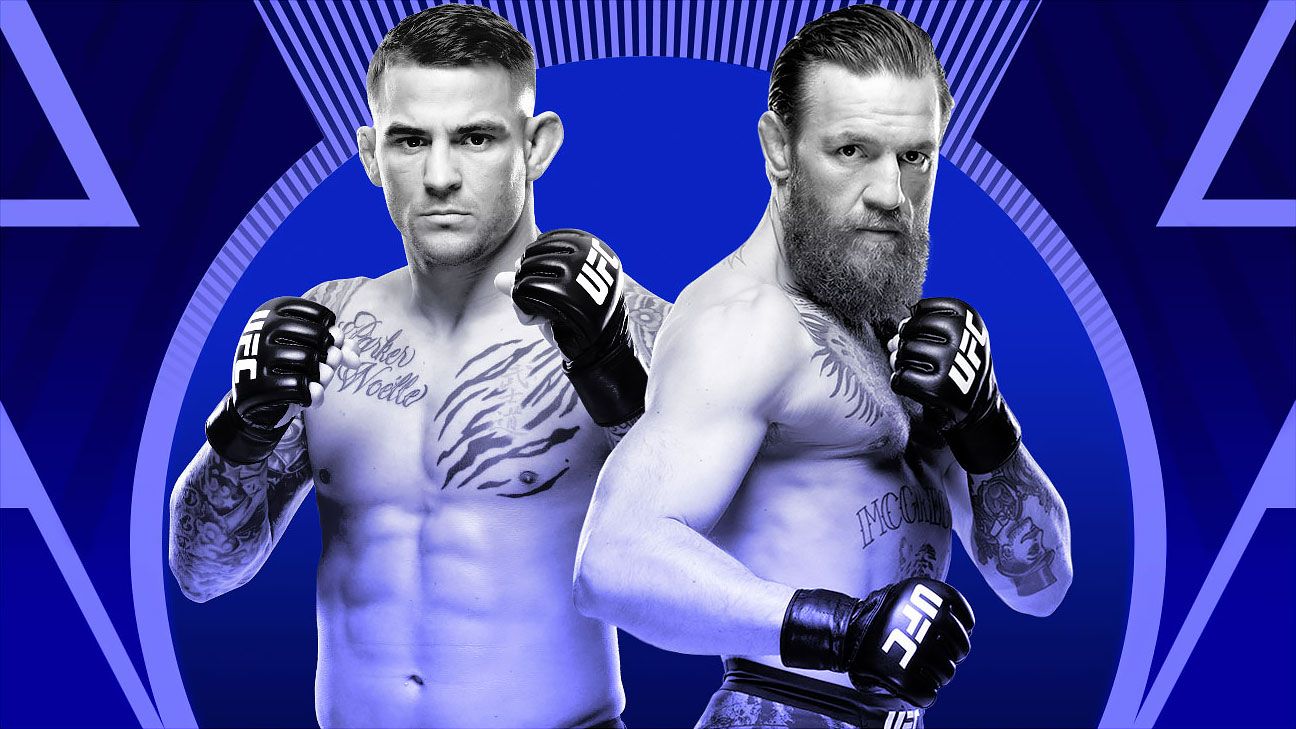 
ABU DHABI, U.A.E. — When Conor McGregor is involved, there is always potential for hyperbole. When you have a star that big, everything tends to dial up a notch — including any comments related to him or an upcoming fight. But allow me to say, I have genuinely looked forward to this moment since the end of 2016.

Whether this all comes to fruition, only time will tell. But I believe we might finally realize the true fighting potential of McGregor in 2021. If you go back to the end of 2016, McGregor was the reigning featherweight and lightweight champion. He’d avenged his submission loss to Nate Diaz. He wasn’t considered the absolute best fighter in the world, but he was on the radar for that honor.

Conor McGregor will return to the Octagon for the first time in a year in the UFC 257 main event. The former two-division UFC champ will take on Dustin Poirier in a fight that could decide the next lightweight title challenger. The bout is a rematch from their meeting at UFC 178 in 2014, a first-round TKO victory for McGregor.

Of course, we all know what happened next. McGregor (22-4), who fights Dustin Poirier in a nontitle lightweight fight at UFC 257 on Saturday in Abu Dhabi (main card at 10 p.m. ET, purchase here on pay-per-view), pursued a lucrative boxing match against Floyd Mayweather in 2017, proceeded to run into various legal troubles, lost a championship fight to Khabib Nurmagomedov in 2018, didn’t fight at all in 2019 and competed once in 2020 for less than a minute.

And frankly, all of that isn’t hard to understand. McGregor rose to never-before-seen levels of fame in 2016, and he cashed in with the Mayweather fight. That match was entertaining and it paid McGregor more than any MMA fight would have, but it was also a farce and a monumental pivot from what he might have accomplished in MMA.

It’s wild to think: McGregor has been in the UFC since 2013, and one could argue he has competed in his most natural weight class only twice. His cut to featherweight was manageable but brutal. And he’s not even close to the average size of a welterweight. McGregor is a lightweight, and we’ve seen him compete there only in 2016, when he won the belt from Eddie Alvarez, and 2018, when he failed to regain it against Nurmagomedov.

Look, we know who McGregor is as a celebrity and a public figure. He has had an obvious impact on the entire combat sports industry, as well as on the sports media industry as a whole. And we know a lot about him as a fighter, too. We know he’s supremely talented. We know he was the UFC’s first “champ-champ.” We know he’s good — great even.

But we don’t know how truly great he is. That’s the part that’s left to be defined. Had he never deviated into the world of a “Money Fight” with Mayweather and more or less disappeared from competition after, what might he have done? Defended the lightweight championship multiple times? Challenged for a third belt? Might he even have beaten Nurmagomedov under different circumstances, if he’d maintained all the momentum of 2016?

I truly, truly hope we’re about to find out. McGregor has repeatedly said he’s committed to this 155-pound frame, and he’s looking to be active in 2021. We know McGregor is an amazing fighter. I want to find out this year exactly how amazing he can be.

6: Knockouts at lightweight for Poirier, tying him for third most in division history, one behind Melvin Guillard and Edson Barboza.

91: Percentage of McGregor victories that he has ended with finishes (19 knockouts and one submission in 22 wins).

1.95: Knockdowns per 15 minutes in the cage for McGregor, the eighth-highest rate in UFC history.

6.45: Significant strikes landed per minute in the Octagon by Poirier, the third most in UFC lightweight history, behind only Justin Gaethje’s 7.46 and TJ Grant’s 6.83.

8: Pay-per-view events headlined by McGregor since 2015, including this one. Only Daniel Cormier (9) has done it more. This will be the fourth McGregor PPV main event that’s a nontitle fight, the most of anyone in the past 10 years.

Dominick Cruz on why Poirier-McGregor 1 went the way it did:

Gilbert Melendez on how Poirier-McGregor 2 can go differently:

“I think Poirier is gonna try to fight smart and win a mixed martial arts bout, not make it a standup battle or a grappling battle,” says UFC Hall of Famer Urijah Faber. “Conor has been looking super impressive as far as his athleticism goes. It looks like he’s taking it really seriously. I’m leaning on the side of Conor again.”

Faber is one of several fighters and coaches who have weighed in with analysis and predictions. See what they had to say here.

Taking a deeper dive into a breakdown of the fight is ESPN MMA analyst Gilbert Melendez, the two-time Strikeforce lightweight champion and a former WEC lightweight champ. His starting point: that this is a rematch.

“McGregor got the best of Poirier years ago,” Melendez writes, “and no matter what, that will weigh heavily on the mindset of both fighters.”

Watch the prelims on ESPN or ESPN+: Download the ESPN App | WatchESPN | TV

Don’t have ESPN+ for the prelims and PPV? Get it here.

Purchased the fight on your phone and want to stream on your TV? Find out how here.

Co-main event raises the curtain on a champion

Michael Chandler, the former Bellator lightweight champion, makes his Octagon debut in the UFC 257 co-main event, facing Dan Hooker, who is No. 6 in the ESPN lightweight rankings. Chandler is No. 7.

Chandler will be the ninth former Bellator champ to move on to the UFC, with the previous eight going 5-3 in their debuts. Those who won: Alexander Volkov, Lyman Good, Ben Askren, Will Brooks and Zach Makovsky. Those who lost: Hector Lombard, Eddie Alvarez and Joe Soto.

Alvarez is the only former Bellator champion to go on to win a UFC title.

1. Joanne Calderwood, who faces 2019 title challenger Jessica Eye, has landed 444 significant strikes in her UFC career, the third most in women’s flyweight history. Calderwood is No. 5 in the ESPN rankings for the 125-pound division.

2. Opening the main card is a matchup between top Brazilian strawweights Marina Rodriguez, who is No. 8 in the ESPN rankings at 115 pounds, and Amanda Ribas, who is 4-0 in the Octagon. Rodriguez is coming off her first career defeat, a split-decision loss to former champ Carla Esparza in July. Ribas has finishes in seven of her 10 career wins (four submissions, three knockouts).