Navalny protests: Hundreds arrested in string of protests across Russia 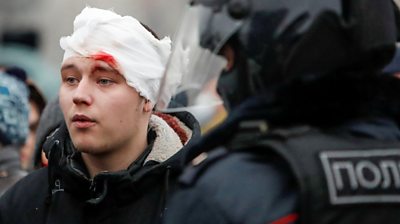 
Hundreds of supporters of high profile opposition politician Alexei Navalny have been detained during protests across Russia.

Navalny was arrested for violating parole conditions immediately after returning to Moscow from Berlin, where he had spent time recovering from a nerve agent attack. Both his wife and lawyer attended protests in Moscow, and both were detained.

Because of past political activity Navalny has previously spent time in police custody, but this is the first time he has been held in a in prison cell. He and his supporters argue the charges are designed to silence him.

Prior to the rallies, Russian authorities had promised a tough crackdown, with police saying any unauthorised demonstrations and provocations would be “immediately suppressed”. Mass gatherings are also banned because of the coronavirus pandemic.