First-round picks from 1 to 32, including Jaguars with No. 1 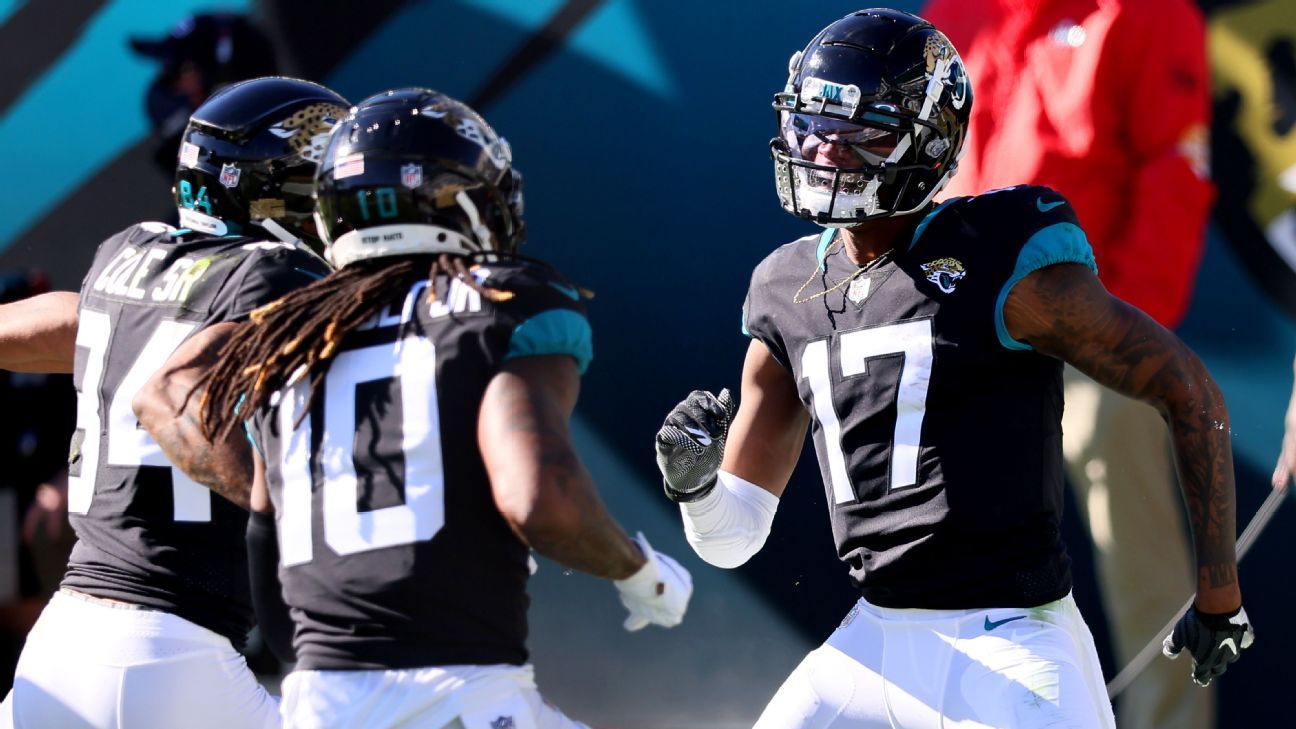 The order for the top 30 picks in the first round of the 2021 NFL draft is set, with the Jacksonville Jaguars picking No. 1 and the New York Jets picking No. 2. Could both teams be thinking quarterback with their picks? NFL draft analyst Mel Kiper Jr.’s top-ranked quarterbacks — Trevor Lawrence (Clemson) and Justin Fields (Ohio State) — squared off in the College Football Playoff semifinals on Friday night, with Fields and the Buckeyes coming out on top.

Both the Jaguars and Jets — along with the Miami Dolphins — have two first-round picks in this draft. The Dolphins ended up with the No. 3 pick — thanks to the Houston Texans’ trade for offensive tackle Laremy Tunsil last year — and the No. 18 pick. The Atlanta Falcons and Cincinnati Bengals round out the top five selections.

The 2021 NFL draft will take place in Cleveland, with the first round on April 29. Rounds 2 and 3 will be on April 30, while Rounds 4 through 7 will be on May 1. The draft will be broadcast on ESPN and the ESPN App.

Check out the top 30 picks below, with Nos. 31-32 projected from the ESPN Football Power Index (FPI), which projects the order by simulating the rest of the season 10,000 times.

The Jets just missed out on their second No. 1 overall pick. They used their only No. 1 to select wide receiver Keyshawn Johnson in 1996. The Jets have picked second twice, selecting wide receiver Johnny “Lam” Jones (1980) and running back Blair Thomas (1990). New York was reported to be targeting Anthony Munoz with the second pick in 1980 but reportedly passed on him because he failed a physical. The Bengals took Munoz third, and he made 11 Pro Bowls. Jones never made the Pro Bowl.

The Bengals are picking in the top five for the 17th time in franchise history and the second year in a row. They’ve used their past four first-rounders to pick offensive players, but only two of them were starters for Cincinnati in 2020 (quarterback Joe Burrow and offensive tackle Jonah Williams).

This is the Eagles’ first top-10 pick since they selected quarterback Carson Wentz at No. 2 in 2016. Of course, they now appear ready to move on from Wentz in favor of 2020 second-round pick Jalen Hurts.

The Lions are picking in the top 10 for the third consecutive year and 26th time in the Super Bowl era. Could they be looking for the successor to 2009 No. 1 overall pick Matthew Stafford?

The Panthers have a choice inside the top 10 for just the second time since 2012. They hit big with the other, selecting running back Christian McCaffrey at No. 8 in 2017.

The Broncos are picking in the top 10 for just the second time since 2011. Pass-rusher Bradley Chubb was their pick at No. 5 in 2018. He has 20.5 sacks in his career and made the Pro Bowl this season.

Five of the Cowboys’ past eight first-round picks have represented Dallas in the Pro Bowl, but only three remain with the team — guard Zack Martin, running back Ezekiel Elliott and linebacker Leighton Vander Esch. This is the Cowboys’ highest draft position since they took Elliott with the fourth pick in 2016.

Four of the Giants’ past six first-rounders are players around whom they hope they can build their offense, though 2018 No. 2 pick Saquon Barkley will be returning from a torn ACL in 2021. Quarterback Daniel Jones (2019) and tight end Evan Engram (2017) had some injury issues that hampered them in 2020. Rookie offensive tackle Andrew Thomas was a plug-and-play starter this season.

When the 49ers selected wide receiver Brandon Aiyuk with the second of two first-round picks last year, it was the first time they had selected a skill-position player in the first round since 2012. In that same span, they selected four defensive ends.

The Chargers have the luxury of not needing a quarterback, as it appears they struck gold with last year’s No. 6 pick, Justin Herbert. The signal-caller from Oregon established a record for TD passes by a rookie and had multiple TD passes in seven consecutive games, another rookie record.

The Vikings are making their highest pick in the first round since selecting cornerback Trae Waynes at No. 11 in 2015. Of their first-round picks prior to 2018, only safety Harrison Smith (2012) and linebacker Anthony Barr (2014) still wear the purple.

The Patriots have their highest first-round pick since 2008, when they selected linebacker Jerod Mayo 10th. He was the NFL Defensive Rookie of the Year and played his entire eight-year career in New England, making two Pro Bowl teams.

Of the Cardinals’ past 10 first-round picks spanning the past 10 years, four aren’t even in the league. Five are still with Arizona. The other is 49ers backup quarterback Josh Rosen.

The Raiders, who have made five first-round picks over the past two drafts, have only one first-rounder this year. Each of those previous five was at a different position, but none of those picks addressed linebacker or offensive line.

How the Dolphins use the second of their two first-rounders will depend largely on what they do with their first. They have needs at wide receiver, offensive line and running back.

The four starters on the defensive line, one of the best units in the NFL, are all first-round picks since 2017. Washington could try to address holes on offense with this pick.

The Bears return to the first round after a two-year absence, courtesy of trading away first-round picks to acquire pass-rusher Khalil Mack in 2018. Their first-rounders from 2015 through 2018 were all top-10 picks, but only two of them (quarterback Mitchell Trubisky and linebacker Roquan Smith) remain with Chicago.

The Colts didn’t have a first-round pick a year ago after they traded it away for defensive tackle DeForest Buckner. They’ve spent two of their past three first-round picks on offensive linemen and hit on both — center Ryan Kelly and guard Quenton Nelson have given Indianapolis one of the best offensive lines in the NFL.

Pass-rushers are hard to come by, but the Titans are desperate to find one after finishing last in the league in sacks. They haven’t taken a defensive end in the first round since Derrick Morgan in 2010.

The Jets have two first-round selections for the first time since 2013. This one belongs to Seattle and was acquired in the trade for safety Jamal Adams. New York has plenty of holes to fill and could go in any direction.

The Steelers, who didn’t have a first-round pick last year after they used it to trade for safety Minkah Fitzpatrick, have used their past seven first-round picks on defensive players, including five linebackers.

With the second of their two first-round picks, the Jaguars could bolster the protection for their first pick. They haven’t taken an offensive tackle in the first round since 2013.

The Browns haven’t used a first-round pick on a player outside of a power conference since 1981. They have needs in their back seven on defense.

The Ravens haven’t selected a defensive lineman in the first round since defensive tackle Haloti Ngata in 2006. It certainly is a need Baltimore could look to address.

The Saints hit it big with two first-rounders in 2017, drafting Pro Bowl cornerback Marshon Lattimore and two-time All-Pro offensive tackle Ryan Ramczyk. They probably will be in the market for some help in the secondary.

Since drafting Aaron Rodgers in 2005, the Packers have had 15 first-round picks. They have used 12 of them on the defensive side, two on offensive tackles and one on a quarterback (Jordan Love in 2020). They haven’t taken a wide receiver in the first round since 2002.

The Bills, who didn’t have a first-round pick last year because they used it to trade for wide receiver Stefon Diggs, have four core starters from their past four first-round picks, including 2020 Pro Bowl selections cornerback Tre’Davious White, quarterback Josh Allen and linebacker Tremaine Edmunds.