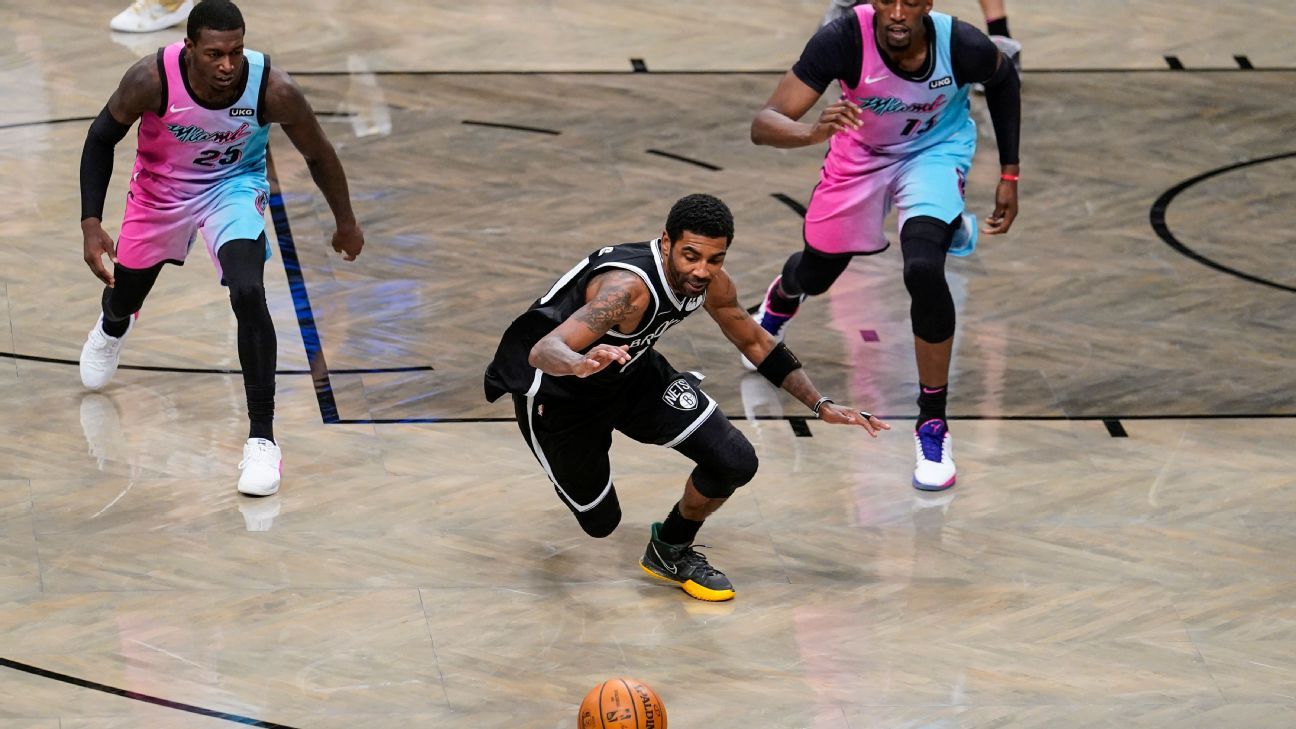 
NEW YORK — With a once double-digit lead whittled down to just one point in the final quarter of the Brooklyn Nets’ Saturday night game against the Miami Heat, Kyrie Irving took over. He splashed in clutch 3-pointers, had driving layups and made key free throws to help lift the Nets to a 128-124 victory.

Down the stretch, Irving said his mentality was: “It’s winning time.”

“I’ve always said that throughout my career,” Irving said. “When it gets down to that point, obviously you just want to buckle down on the defensive end, get stops, and I felt like we did that.”

The win snapped a two-game losing streak for the Nets, who dropped a pair of games at the Cleveland Cavaliers earlier this week. Irving’s 18 fourth-quarter points were the most he has scored in a final quarter since joining Brooklyn.

“We had two losses where we had to learn a lot very quickly,” Irving said. “And we just moved on to the next night. And I feel like we gave the effort in spurts, and obviously we want to have more consistency in that — and that’ll take time. I’m happy with the effort tonight.”

Bam Adebayo finished with a career-high 41 points, five rebounds and nine assists for the Heat.

“It was about time Bam had 40 in terms of getting a lot of those moves that he’s been working on in the offseason,” Irving said. “Just watching him grow since high school, be able to take over at this point for kind of an undermanned Miami team, it’s good to see.”

The Nets came into Saturday’s game with the goal of improving defensively. While they couldn’t fully contain Adebayo, there were glimmers of improvement.

After being outrebounded 50-29 on Friday in Cleveland, the Nets buckled down in defensive rebounding against the Heat. Brooklyn had an 81.3% defensive rebound rate on Saturday — its third highest in a game this season — as compared to just 58.1% the night before.

Nets coach Steve Nash continued to experiment with lineups involving the team’s three All-Stars. Harden played 11 minutes with both Durant and Irving on the bench. And while Harden’s 12 points were his fewest since January 2020, his five straight games with double-digit assists have already tied for the fourth longest such streak in Nets history.

“It feels good not to have to score so much to give ourselves a chance to win a game,” Harden said. “I can go out there and just be a playmaker and shoot my shot when it’s available and still get guys involved — and still have a chance to win the game.”

“That’s a change,” Harden added. “But for me just being the player that I am, impacting the game in other ways other than scoring.”

“I just want to follow NBA protocol,” Irving said, smiling, before adding: “I have the jersey, by the way.”