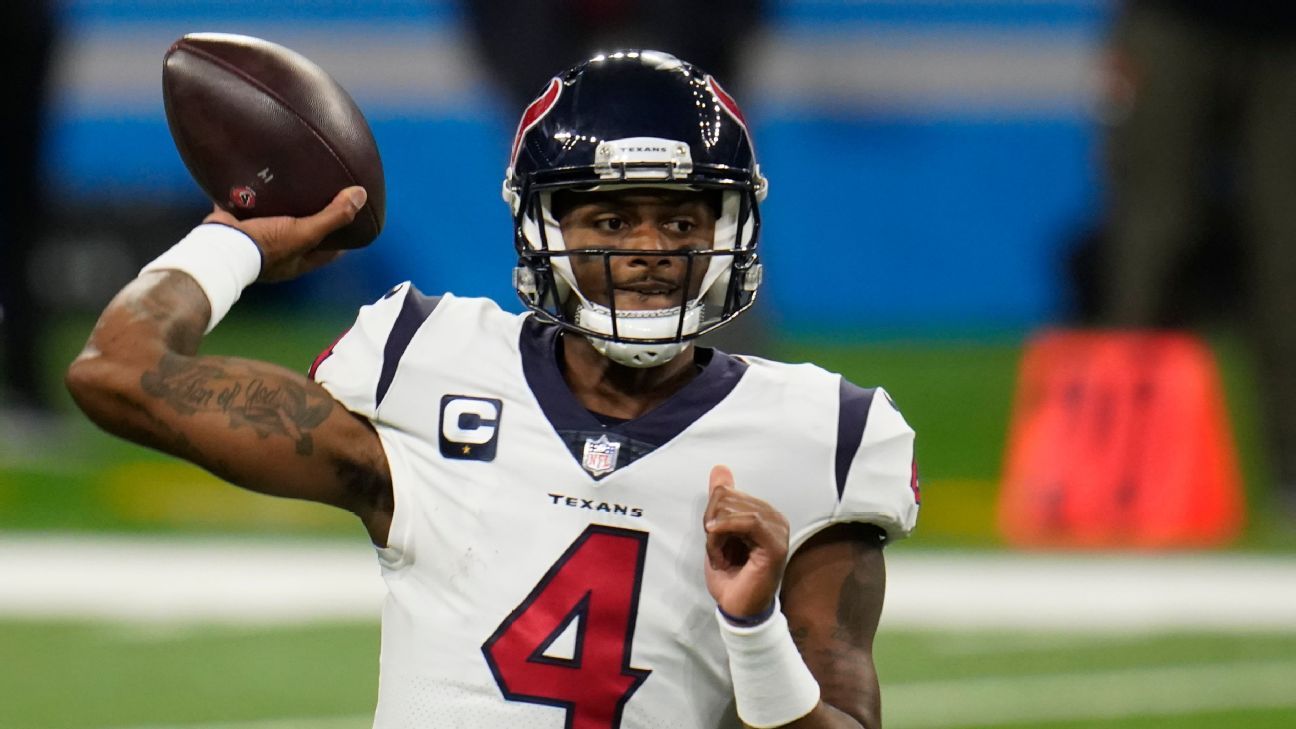 
FLORHAM PARK, N.J. — A look at what’s happening around the New York Jets:

1. Impatient boss? A lot of folks might be wondering how Woody Johnson’s return to the team will impact the product on the field. Fair question. During his first 17 years as acting owner (2000-16), a period in which the Jets made the playoffs in six of the first 10 years, Johnson developed an affinity for making splashy moves.

(P.S.: None of them worked out, but they sure generated plenty of buzz.)

People who have worked for Johnson say he loves big names, especially at the quarterback position. There’s a pretty big name who could become available via trade this offseason, if he’s not already — Deshaun Watson of the Houston Texans. I could see Johnson, 73, who missed the past four seasons while serving as former president Donald Trump’s ambassador to the United Kingdom, wanting to deliver a “statement” move to raise the franchise’s visibility.

The Jets should absolutely make a run at the disgruntled star, but this isn’t a simple case of see-quarterback, get-quarterback. The competition will be fierce, although the Jets have the most draft capital to offer. Watson would have to waive his no-trade clause to play for the Jets, but he reportedly is a Robert Saleh fan. So maybe there’s hope. Watson’s preferred destination is the Jets, according to a Miami Herald report that says the Jets are his top choice because of Saleh.

Presumably, Johnson will let his football people make the decision, but his return to the role of principal owner with final say on all matters certainly adds another wrinkle to what should be a fascinating storyline this offseason.

News that the Lions and QB Matthew Stafford have agreed to part ways could affect the Jets in two ways: 1. If they decide to move on from Sam Darnold, Stafford could be a trade option if they deem Deshaun Watson too pricey and don’t like the QB options… https://t.co/LbOSXA8aCv

2. Darnold in limbo: Saleh’s effusive praise of Sam Darnold might lead some to believe Darnold is a lock to be back as the starting quarterback. While I know Saleh’s feelings are genuine — he thinks he can win with him — it’s premature to draw that conclusion.

Frankly, it would be foolish for the Jets to tip their hand at this point, considering the number of factors that will be considered — Darnold’s contract (one year left), the 2021 NFL draft (No. 2 pick) and perhaps the Watson situation. ‘Tis the season for posturing. We might not know the truth until April 29, the first night of the draft.

3. Bells and whistles: Whether it’s Darnold or another quarterback, fans won’t recognize the offense in 2021. New offensive coordinator Mike LaFleur will employ the Kyle Shanahan version of the West Coast offense, which means a lot of pre-snap motion and play-action — a radical departure from the Adam Gase system.

It will be a welcome-to-the-21st-century season.

Stephen A. Smith likes the Urban Meyer hire by the Jaguars because of the former Ohio State coach’s elite résumé.

4. Armed and ready: The Jets have three quarterbacks under contract — Darnold, James Morgan and Mike White. There’s another talented passer in the QB room.

New position coach Rob Calabrese, who played sparingly at Central Florida from 2008 to 2012, is only 30 years old. His previous team, the Denver Broncos, where he was offensive quality control coach, tried to activate him for a game against the New Orleans Saints when their quarterback depth chart was wiped out by COVID-19. In the end, the Broncos’ request was denied by the league.

This is a homecoming for Calabrese, who played at Long Island’s East Islip High School, Boomer Esiason’s alma mater.

5. Long-overdue move: The Jets made the right move by reorganizing their power structure. Instead of having the coach and general manager report directly to ownership, the setup since 2015, they reverted to the traditional chain of command. Saleh will report to general manager Joe Douglas, who reports to ownership.

The other way can work if all parties are well-established in their positions, but it got clumsy because the Jets tried it with neophytes — a first-time coach (Todd Bowles), first-time GMs (Mike Maccagnan and Douglas) and a first-time owner (Christopher Johnson, who subbed for big brother Woody).

Christopher Johnson downplayed the change, claiming the old system worked fine. Huh? Did he forget how Gase exerted his power to get Maccagnan ousted in 2019?

The new structure is a win for Douglas, who gets more power after nearly two years on the job. Clearly, he has captured the trust of the Johnson family. It’s a pivotal year for Douglas. He picked the coach, and now he has to pick the quarterback. What happens this offseason will ultimately determine his legacy.

6. Coach Brick: New defensive coordinator Jeff Ulbrich comes to the Jets with playcalling experience. In 2019, he was a de facto coordinator for the Atlanta Falcons when coach Dan Quinn ceded the playcalling duties to him at midseason. Actually, Ulbrich called first and second down, Raheem Morris handled third down. The defense played well over the second half of the ’19 season.

In 2020, Ulbrich became the full-time playcaller in Week 6, when Morris was elevated to replace Quinn. The Falcons didn’t have much talent on defense, but they played well for Ulbrich, whose unit allowed more than 27 points in two of 11 games — both to Tom Brady and the Tampa Bay Buccaneers.

Wisely, Saleh will let Ulbrich call the plays, which will allow him to focus on the big picture.

7. Free-agent target: Remember this name — Keanu Neal. I’d be surprised if the Jets don’t show interest in the Falcons’ safety, a 2016 first-round pick who knows Ulbrich and knows the system. He’d be the ideal complement to Marcus Maye (also a free agent). In fact, Neal and Maye were a college safety tandem at Florida.

Asked about Maye, Saleh said he hasn’t had a chance to study him closely, but he has heard nothing but good things about him from Douglas.

8. Q factor: Saleh is very high on defensive tackle Quinnen Williams, who should thrive in his 4-3 front.

“I absolutely love Quinnen,” Saleh said. “[I’m] really excited to get the seat belt off his harness and let him go. … His mindset, his athleticism, his power, his love for football, I’m really, really excited to see him in our system, especially up front and the way we design with that attack style.”

In Saleh’s system, the defensive linemen are asked to play vertically, meaning their job is to get upfield as quickly as possible — ideal for Williams’ skill set. He could become the Jets’ version of DeForest Buckner or, going back to Saleh’s Seattle Seahawks days, Michael Bennett.

Only one did it twice — Sanchez.

10. The last word: “It could flip tomorrow. It could flip whenever. One thing I know is, we’re going to win championships.” — Saleh on how long it will take for the Jets to contend (via The Michael Kay Show on ESPN New York 98.7 FM).