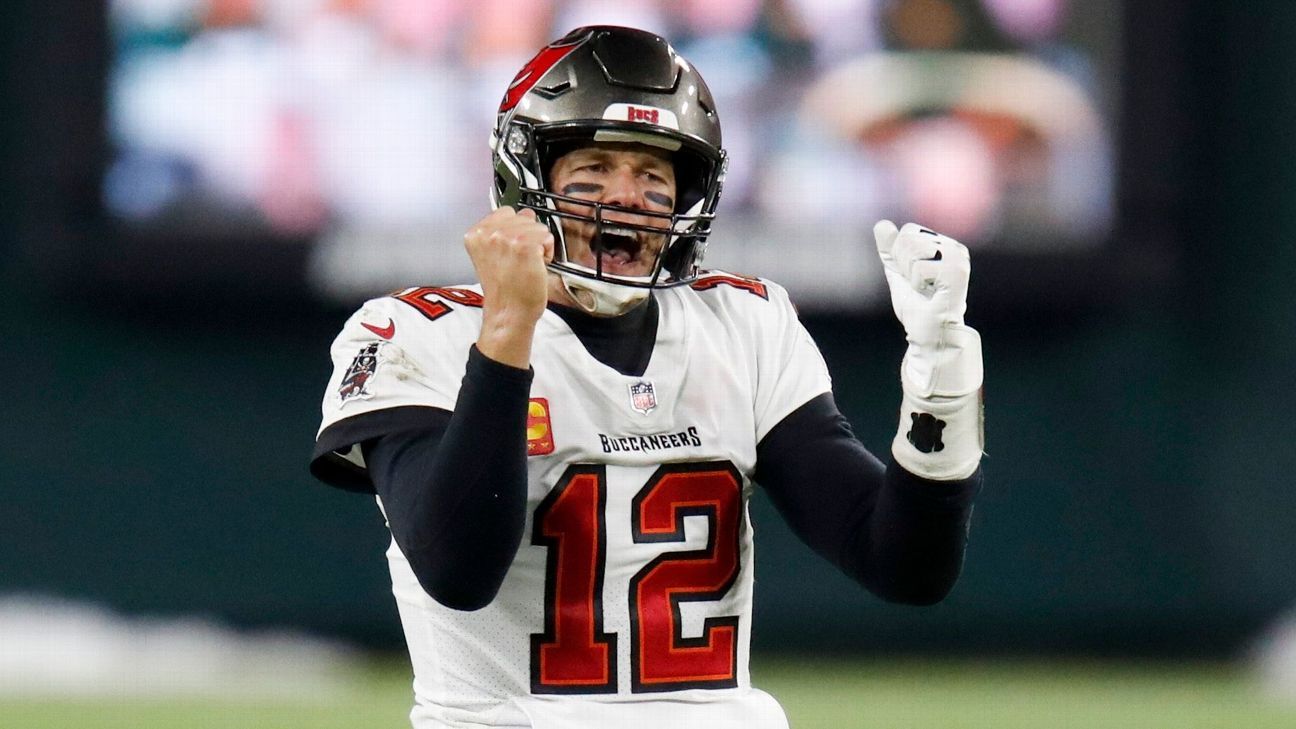 But this time it comes as the quarterback of the Tampa Bay Buccaneers.

Brady and the Bucs knocked off the No. 1-seeded Green Bay Packers 31-26 in Sunday’s NFC Championship Game at Lambeau Field. They will now face the winner of Sunday’s AFC Championship Game — either the defending Super Bowl-champion Kansas City Chiefs or the Buffalo Bills — at Raymond James Stadium in Super Bowl LV.

The Bucs will become the first team in NFL history to play a Super Bowl in their own stadium.

“I guess when I was holding the Halas Trophy, I was like, ‘Oh my gosh. We’re actually gonna do it,'” coach Bruce Arians said. “We can dream about looking across the street [at the stadium] for two weeks.”

“It was obviously the goal of ours to start the season, but getting to the Super Bowl wasn’t what our goal is,” Arians said. “Our goal was to win it.”

The Bucs hadn’t been to the postseason in 13 years or won a postseason game in nearly two decades — when Brady’s reign with the New England Patriots had just begun. Yet Tampa Bay emerged as the free-agency dark horse no one saw coming when Brady decided to leave the Patriots in the offseason.

“It’s been a great journey thus far,” Brady said. “We put the work in. Guys just embraced everything, really, when [Arians] got here last year. There was a lot of great things that were happening, a lot of great young players. I just made a decision. I’ve loved coming to work every day with this group of guys.”

Many felt it was arguably the biggest professional risk of Brady’s career to leave his longtime coach, Bill Belichick, and go to the Bucs. To make things worse, Brady had no offseason to collaborate with coach Bruce Arians and offensive coordinator Byron Leftwich and no preseason to work out the kinks in a new system because of COVID-19. Critics pointed to his struggles with the deep ball. They feared his relationship with Arians was already unraveling.

“We were at 7-5 seven games ago, not feeling great. We felt like we needed to find our rhythm. We played four games down the stretch the last quarter of the season, and then after that, it was just all bonus,” said Brady, who entered the postseason for the first time as a road wild-card team.

“The guys came through. Everyone stepped up to the challenge. … It takes everybody, and everybody plays a role. I’m just so proud of this whole team and blessed to be a part of it.”

Against the Packers, Brady completed 20 of 36 passes for 280 yards and three touchdowns, with Leonard Fournette spinning his way to a fourth score on the ground.

But then Whitehead left the game with a shoulder injury, leaving the Bucs without both of their starting safeties as the Packers began to rally in the second half. Brady threw three second-half interceptions — two to cornerback Jaire Alexander and one to safety Adrian Amos — while Rodgers threw touchdowns to tight end Robert Tonyan and wide receiver Davante Adams.

The Packers had a chance to tie the score, down eight points with the ball at Tampa Bay’s 8-yard line on fourth-and-goal, but they decided to kick a field goal with just over two minutes to go in the game. They never got the ball back.

“The resiliency of the crew — the defense gritted their teeth and went out and got [the ball] back for us and we made some big, big plays,” Arians said, before addressing Brady’s play on the Bucs’ final drive to seal the game. “It’s just water off his back. It’s like, ‘Hey, let’s go get it.’ Nothing phases him.”

“Just his composure — he’s been here before, he’s been in these big moments, and we know he’s gonna get it done,” wide receiver Scotty Miller said. “Obviously he had a couple picks, but when it’s all on the line, he’s gonna make the play.”

Brady now gets to try to do something his boyhood idol Joe Montana could not: go all the way with a new team in his first year. Montana came close, leading the Kansas City Chiefs to the AFC Championship Game in 1993, but they lost to the Bills 30-13.

So it’s back to Tampa for Brady and the Bucs. It’s fitting that as workers transformed Raymond James Stadium over the past few weeks — replacing Buccaneers signage with that of “Super Bowl LV” and the Lombardi Trophy — that they conveniently kept one panel of the outer facade intact, at the southwest corner entrance: the image of Tom Brady and Mike Evans.

Might as well leave it up. And maybe fire the cannons.

“Tom’s the GOAT. Last year I think we ended 7-9, and now we’re heading to the Super Bowl,” Miller said. “He’s at the helm. He’s our leader. He’s probably the biggest reason we are where we are.”