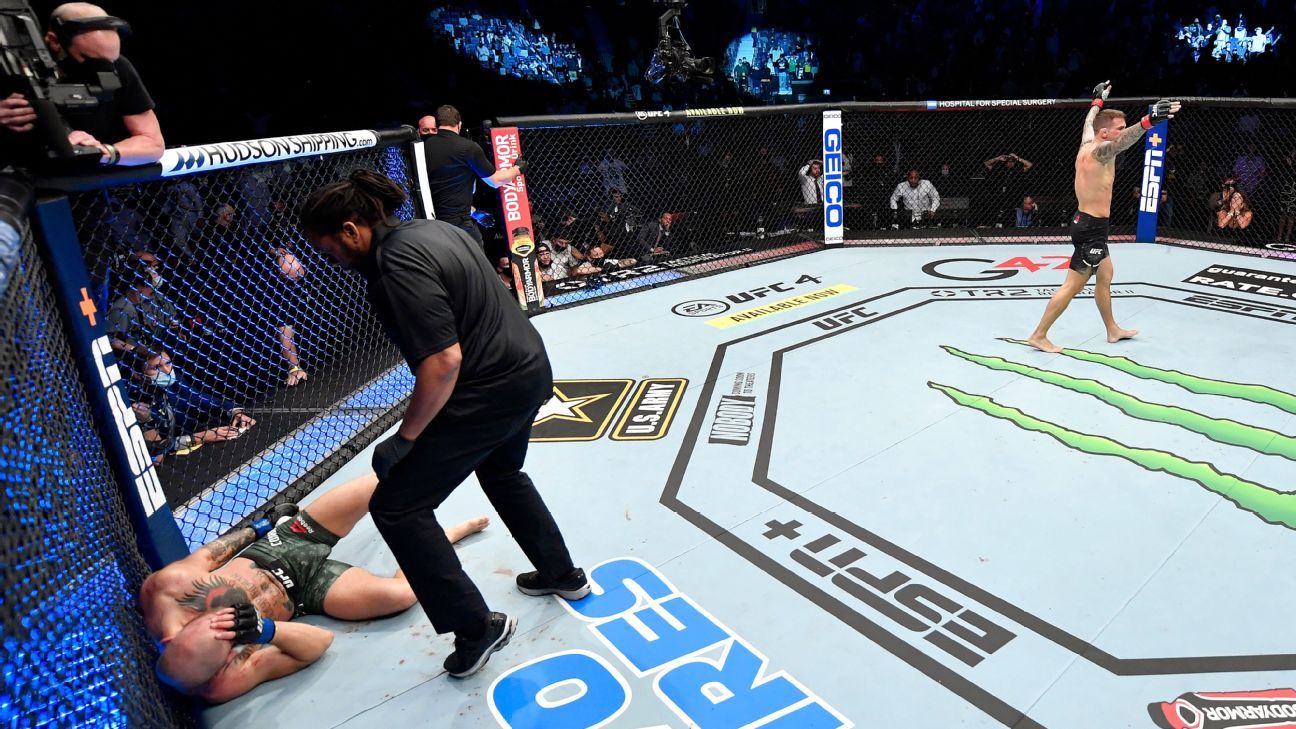 
There’s no underestimating Dustin Poirier any longer. The significant underdog got revenge for his loss at UFC 178 by knocking out Conor McGregor in the second round to shock the crowd in Abu Dhabi and even the score on Saturday at UFC 257.

Poirier has now won six of his last seven bouts with his only loss coming to lightweight champion Khabib Nurmagomedov in September 2019.

But right before Poirier’s big moment, Michael Chandler announced himself as a key player in the division. Chandler knocked out the typically durable Dan Hooker, did a backflip off the Octagon and offered a memorable promo that would make wrestling fans proud. He called out everyone, appropriately, and proved to the UFC that his signing was a smart one.

What happens with the lightweight division? Where does McGregor go from here? Is Nurmagomedov coming back? Here are some answers.

Saturday was all business for Poirier. He said the experience wasn’t emotional and he didn’t seem to relish any kind of revenge over McGregor. To Poirier, this was simply a ranked lightweight fight and he won.

Poirier considers himself the champion, and the minute Nurmagomedov officially clarifies that he is retired, he should be the champion. His first defense should be against the other man of the hour at UFC 257, Chandler.

Nurmagomedov isn’t coming back for Poirier. There’s no need to run back McGregor, at least not right away. Charles Oliveira is interesting, but Chandler has the momentum, the steam, and the win on the same card. That’s the fight.

Who’s next: Nate Diaz. This loss for McGregor hits different than previous ones. When he lost to Diaz in 2016 there was a built-in explanation that he had mismanaged the weight on short notice. When he fought Nurmagomedov in 2018, he was a man who was distracted by the millions he’d made in the Floyd Mayweather fight.

I’m not saying those are excuses for either loss, but they were ways for McGregor to justify the outcomes in his head. Saturday he looked prepared. He looked on point and he got beat by a better fighter.

Where he goes from here will be very interesting. It’s either throw himself into 155 contender mix or finally do the long-awaited trilogy with Diaz. Of those two options, I believe Diaz is the clear choice.

I love this fight. Love everything about it. The only reason I wouldn’t put it above is that Holloway is next in line for a 145-pound title fight. If he goes to 155 pounds, he wants to take time and add mass to his frame in a smart way. Given that preparation, he can’t just take a one-off against McGregor at lightweight because it would mean forfeiting his shot at the 145-pound belt.

I hope we see this fight someday, but I don’t think we’ll see it next.

Chandler had one of the best UFC debuts of all time. Chandler was nothing short of remarkable in every way. He was poised, efficient and strategic during the fight, then cut the best promo you could’ve ever asked for. Give Chandler 100 more tries and I don’t think he could nail it any better than he did on Saturday.

Not only did this victory prove that Chandler is good enough to fight for a title, I think the numbers will show people are interested in that fight. It would be only his second UFC fight, but give the man his title shot.

Personally I thought the best opponent for Ferguson in December was Diaz, but now I think the better opponent for Diaz is McGregor. After two losses in a row, things aren’t good for Ferguson right now and as much as he would debate this, it is fair to wonder if his days as an elite lightweight are over.

A fight against Hooker is a chance for Ferguson to prove that this assumption is false, because despite what happened on Saturday, Hooker is still elite. It’s a name for Hooker, who is obviously disappointed about this fight and for Ferguson, its a chance to redeem himself after a disastrous 2020.

These two fought in February 2020. It was a fight that was literally too close to call. Had the judges gone with Felder instead of Hooker, i wouldn’t have complained. It was one of those fights that had no loser.

In a way there’s unfinished business. I would prefer a fresh matchup for Hooker, but from a rankings perspective, it’s worth considering.

JoJo Siwa: YouTube star 'never been this happy' after coming out