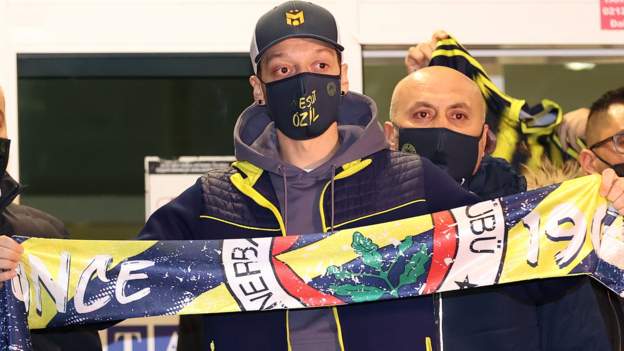 
Mesut Ozil says he will be a “Gunner for life” after completing his free transfer from Arsenal to Fenerbahce.

The 32-year-old former Germany midfielder has signed a three-and-a-half-year deal with the Turkish side.

He won three FA Cups with Arsenal and scored 44 goals in 254 appearances in all competitions for them, but has not played for the first team since March.

“It is difficult for me to put into words the love I feel for the club and the fans,” Ozil said in an open letter.

“How could I possibly describe eight years of gratitude in a single letter?

“I will be a Gunner for life – no doubt about that.”

He added: “Arsenal is a club of class and prestige, something that I felt every time I walked on to the pitch.

“Players, staff and management always come and go – but the club’s values and fans will remain forever.

“The principles of class, respect and dignity must never be forgotten. It is the responsibility of every single person from the club to make sure they carry out their job in the name of these values.”

Highs and lows of Ozil’s time at Arsenal

Ozil joined the Gunners from Real Madrid for £42.4m in 2013 – then a club record transfer fee – and made an impressive start as they won the FA Cup in his first season to end a nine-year wait for a trophy.

He made 32 appearances in the 2014-15 season, despite missing three months with a knee injury, and won the FA Cup for a second year in a row.

In the following season he produced 19 assists in a single campaign, only one short of the Premier League record, now jointly held by Thierry Henry and Kevin de Bruyne. He also became the first player to create a goal in six consecutive matches and was named Arsenal’s player of the season.

But, in September 2017 Ozil was forced to defend his performances for the club and urged critical former players to “stop talking and start supporting”.

He became the highest-paid player in the club’s history in January 2018, signing a new three-and-a-half-year deal giving him about £350,000 a week before tax, but refused to take a pay cut last summer, with no football being played and Arsenal looking to balance the books.

Ozil, a 2014 World Cup winner with Germany who retired from international football in July 2018, had fallen out of favour under previous Arsenal manager Unai Emery, before returning to the side under interim boss Freddie Ljungberg.

After Mikel Arteta’s appointment in December 2019, Ozil started all 10 of Arsenal’s Premier League games immediately before the coronavirus pandemic forced a three-month suspension of the top flight in March – and did not play for the club again.

In October he was omitted from Arsenal’s 25-man squads for both the Europa League and Premier League.

“The past few months haven’t been the easiest. Like every player, I want to play every minute of football for my team,” Ozil said.

“In life however, things do not always play out how we expect or want them to.

“But it is important to look for the positives in life and not the negative, which is why I try to live with no regrets and holding no grudges.”

In Arsenal’s statement announcing his departure, Ozil paid tribute to the Gunners’ technical director Edu, thanking him for “helping bring about a professional and dignified solution”.

Edu said: “We would like to thank Mesut and his team for their professionalism during our recent negotiations. I know everyone associated with Arsenal will join me in wishing Mesut and his family the best of health, success and happiness in the next chapter of his career.”

Manager Arteta, who played alongside Ozil until 2016, said his achievements at the club are “undisputed”.

“It was a privilege to play alongside him and, more recently, coach him,” said Arteta. “His creativity and vision led to many goals during his time in the Arsenal shirt.

“Mesut was at the heart of many great moments for this club over the years, including those three FA Cup final wins. These successes will always be part of our history.”

Meanwhile, Fenerbahce have called on supporters to help them fund Ozil’s contract, with the club reportedly £450m in debt.

They have reportedly set up a text message service through which fans can donate money.