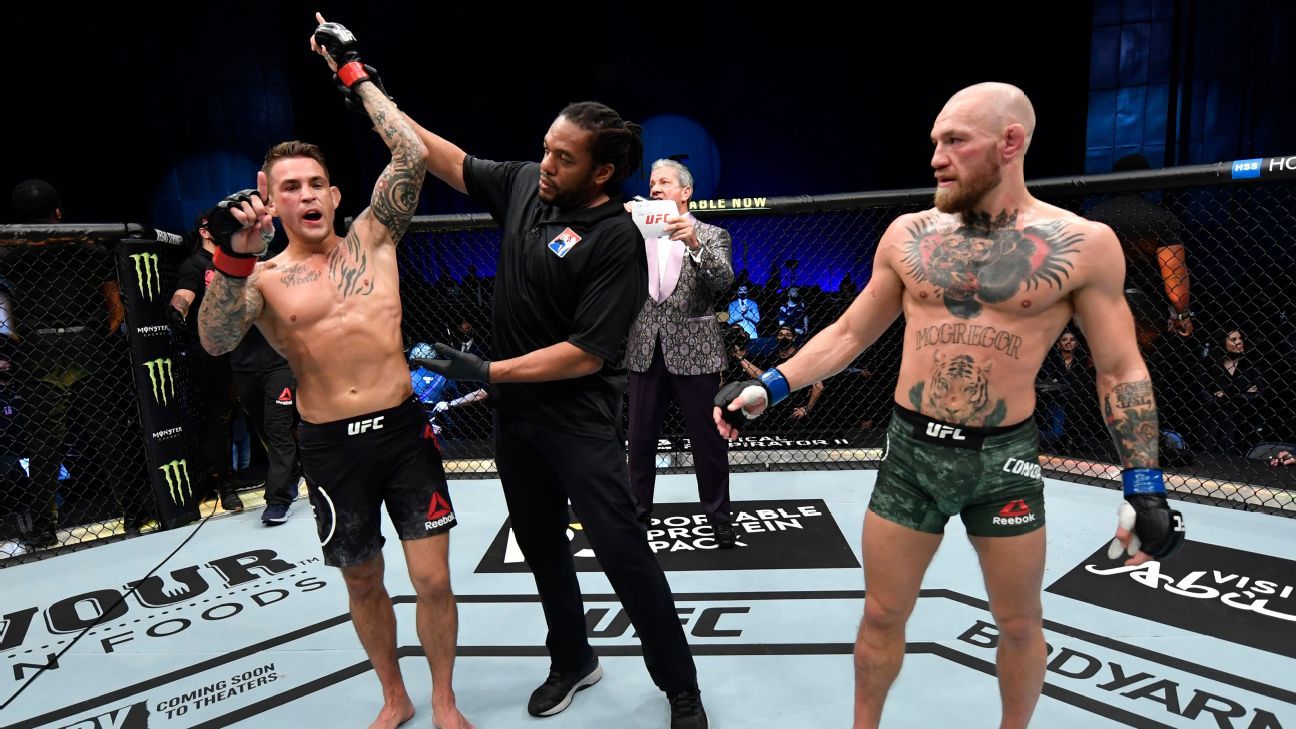 
After the events of UFC 257, a lot of attention is rightfully being paid to the lightweight division and the state of play at the top. Dustin Poirier staked his claim to a title shot with his victory over Conor McGregor, while Michael Chandler made a statement of his own in his UFC debut by knocking out Dan Hooker.

With the return of champion Khabib Nurmagomedov looking less likely by the day, the wheels appear to be in motion for determining who will fight for the belt, if and when it is vacated. Outside of Poirier and Chandler, fighters like Charles Oliveira and Justin Gaethje also figure to be in the conversation.

The UFC returns to action on Feb. 6 at the UFC Apex, as Alistair Overeem (ESPN’s No. 6 ranked heavyweight) and Alexander Volkov (No. 7) battle in an opportunity to improve their standing in the heavyweight division. Overeem has won four of his last five, while Volkov is coming off an October win over Walt Harris.

Even Nate Diaz’s name has been floating around as a potential opponent for these contenders, and he’s apparently open to the possibility.

And don’t count out McGregor just yet. It was a difficult loss after a long stretch of relative inactivity, but if his postfight comments are to be believed, it seems as though he’s still committed to winning his way back into the conversation.

With so much going on over the past 48 hours, our expert panel — Ariel Helwani, Marc Raimondi and Jeff Wagenheim — is here to sift through what’s real and what’s not when it comes to the future of the UFC’s lightweight division.

Conor McGregor’s days as a top contender are over

Helwani: Not real. The bottom line is, losses in MMA don’t mean as much as they do in boxing. Some of the best fighters of all time have close to, or even more than, double-digit losses.

Going into this fight, McGregor fought for a collective 40 seconds since October 2018. He lost to one of the best fighters in the world Saturday night. Poirier had an amazing game plan and won the fight fair and square. But that doesn’t mean McGregor is irrelevant or a gatekeeper, or some nonsense like that.

He obviously won’t be fighting for a title next, but if he comes back against a top contender, wins that fight, gets on the mic and delivers another McGregor-esque promo, all will be forgotten and he’ll be a contender again. He’s only 32, after all. There are plenty of winnable fights out there for him against high-caliber opponents.

Nate Diaz is a realistic next opponent for Dustin Poirier

Raimondi: On paper, this doesn’t seem to make a ton of sense. Poirier has won two straight, including the biggest victory of his career, over McGregor via finish. There doesn’t seem to be any way that Poirier is not in a title fight next, right? Diaz, meanwhile, hasn’t fought since his loss to Jorge Masvidal in November 2019. He certainly wouldn’t fit the bill as your prototypical title contender. With all that being said, I’m going to say “real” for this one. I do think it’s a possibility.

I’m training to whoop ur ass next.
Be about it don’t talk about it 👊🏼 pic.twitter.com/M7FKHvIbFu

It’s actually not all that outlandish. Both men are into the idea of fighting each other. That’s two-thirds of the puzzle right there, with the UFC being the last party to convince. Poirier said in the UFC 257 postfight press conference that a rematch with McGregor, or a fight with Diaz, would be the two most intriguing things for him next. He completely shut down a title fight with Chandler, because he doesn’t feel Chandler, who just made his UFC debut, has done enough to earn a shot at the belt.

Poirier and Diaz have a history. They were supposed to fight at UFC 230 at Madison Square Garden in 2018. There was even a press conference and staredown for that fight. But it fell apart for unclear reasons. Poirier said Diaz was the first to back out and then Poirier had minor surgery. Diaz said he believes Poirier never had any intention of fighting him. There is definite bad blood. Those guys really don’t like each other. It’s an easy sell for the UFC, between one of its most popular athletes in Diaz and arguably its hottest fighter in Poirier.

Now, Poirier did say another significant thing at the postfight press conference Saturday. He said he still wants to be the undisputed lightweight champion, a distinction that sticks with you for life if you earn it. It just doesn’t seem plausible that Diaz, who hasn’t fought at lightweight since 2015, would be installed into a title fight. But stranger things have happened in this wacky world of MMA. And if there is interest there from Poirier and Diaz — and the paying audience — you bet it’s a possibility. If Poirier is willing to pass up a title shot next for a Diaz bout, why couldn’t it happen?

Real or not: A four-man lightweight tournament is the best way to crown the new champion.

Dustin Poirier tells Brett Okamoto that going into his UFC 257 fight, he didn’t really want to be there but when he entered the Octagon, he felt home.

Wagenheim: It’s so real that it’s already happening. Aren’t we already in the middle of a lightweight championship tournament?

When the UFC was booking McGregor’s return, matchmakers made sure to add a second high-level 155-pound fight as Saturday’s co-main event. That way, even if Poirier was unable to make it to the cage, there would be a replacement handy so McGregor, the pay-per-view king, could remain on the card.

Aside from being an insurance policy, though, the Chandler-Hooker bout also was ostensibly the other side of a tournament bracket. That became clear at the postfight press conference when UFC president Dana White spoke of matching up Poirier and Chandler for the belt. How convenient.

Problem is, that matchmaking would leave out the fighter most qualified for a championship bout. Charles Oliveira has won eight in a row, most recently last month’s stunning domination of Tony Ferguson. If the process for replacing retired titleholder Khabib Nurmagomedov is to be legitimate, Oliveira simply has to be part of it.

There’s no such thing as a three-man tournament, though, so the UFC should toss Justin Gaethje into the mix. Yes, I know he’s coming off a loss, but before being choked out by Nurmagomedov in October, “The Highlight” had won four in a row. He fared no worse against Khabib than Poirier did. He’s the one who softened up Ferguson for Oliveira. And he has accomplished more inside the Octagon than Chandler, who was making his UFC debut this past weekend. No other 155-pounder belongs as the fourth person in the title tourney bracket ahead of Gaethje, one of the most exciting fighters in the UFC.

I’d go with Poirier vs. Oliveira and Chandler vs. Gaethje, but regardless of how you pair up these guys, it’ll be a fiery night of fighting and a tremendous title fight no matter the result. When do we begin?

Michael Chandler is a UFC superstar in the making

Raimondi: I’ve known Chandler for nearly a decade. He has never been anything less than a class act. Chandler also has a few of the most exciting fights in MMA history under his belt, including two all-time classics against former UFC lightweight champion Eddie Alvarez. There was a time when all those attributes would have made Chandler one of the biggest draws in the sport, like a muscled-up Matt Hughes with one-punch knockout power.

Unfortunately, I’m just not sure if that time is now. This is not a statement on Chandler’s fighting ability. I’ve been saying for nearly a decade that Chandler is one of the best lightweights in the world. There were times over the past 10 years that you could have argued that he was the best on the planet at 155 pounds. Now, he’s still in that conversation and getting to prove it in the UFC. No one deserves it more than him. Chandler very well could be a future UFC lightweight champion. But if the question is “superstar,” which implies someone who sells a ton of pay-per-view units, I’d say “not real” on that one.

Today’s world is all about who can scream the loudest, say the most controversial things and go viral on social media. Chandler isn’t that guy. Go look at his Instagram and the photos with him, his wife, Brie, and son, Hap. Chandler is a family man, albeit one who can put you to sleep with one punch or toss you across the Octagon with a suplex. But is he the next Conor McGregor at the box office? I’m not sure he is.

What does trading Matthew Stafford mean for the Lions in value and their future QB? – Detroit Lions Blog