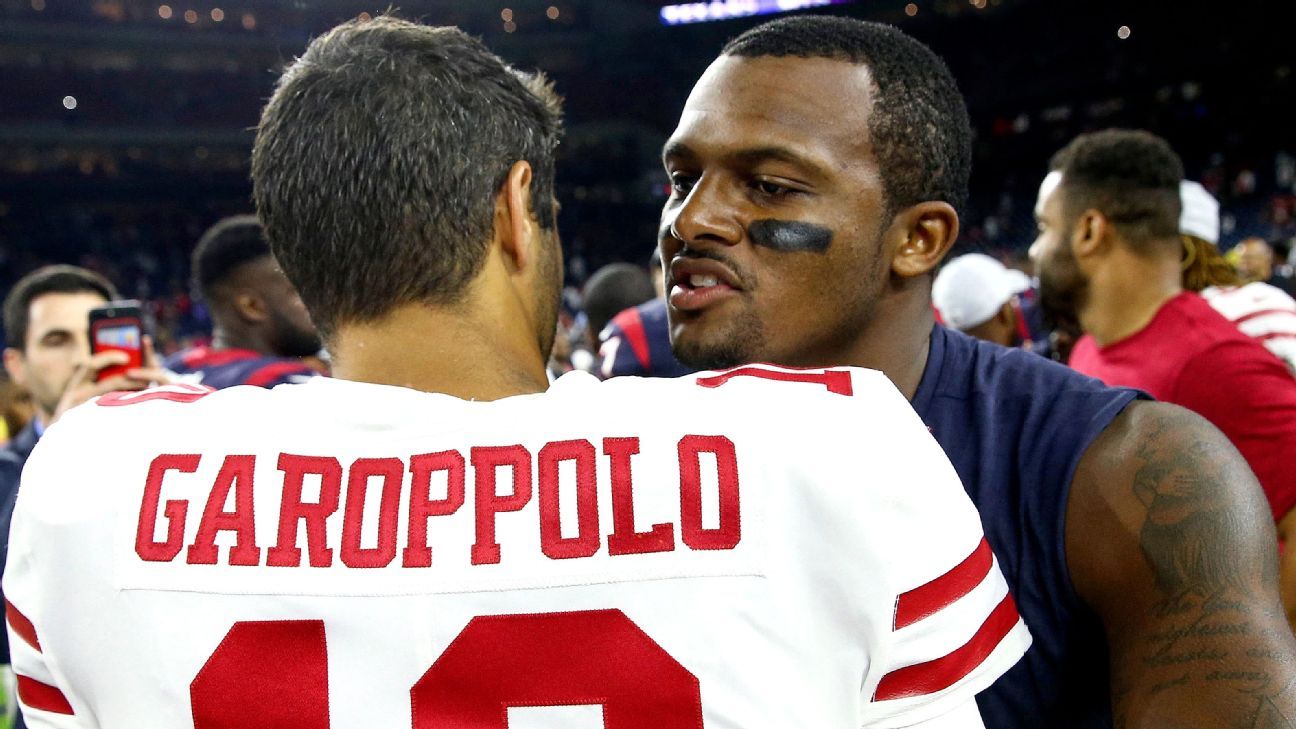 
SANTA CLARA, Calif. — Asked about the future at quarterback, San Francisco 49ers coach Kyle Shanahan and general manager John Lynch have repeatedly said they expect Jimmy Garoppolo to be the starter in 2021.

But Shanahan and Lynch have also left wiggle room in case something better pops up. Something like, say, an opportunity to land a 25-year-old franchise quarterback entering his prime or a 32-year-old with eight 4,000-yard seasons looking to play for a contender.

“You can’t say anything with certainty,” Shanahan said in late December. “You don’t sit here and make promises on anything.”

For example, nobody would have thought the Houston Texans would trade quarterback Deshaun Watson after he signed his four-year, $156 million extension in September.

Just a few months later, the idea doesn’t seem so outlandish, as ESPN’s Adam Schefter has reported multiple people in and around the team believe Watson is so unhappy in Houston he has played his final snap there. Watson has not formally requested a trade and there’s still a chance he’ll stay with the Texans. But if he asks out, he’ll be highly-coveted by many teams.

While the Watson situation needs clarity, there’s no doubt the Detroit Lions and quarterback Matthew Stafford are headed toward a split. Sources told Schefter on Saturday the Lions will seek a trade for Stafford. That news was less surprising as the Lions begin a rebuild and Stafford seeks a chance on a contender.

Both situations bear monitoring for the 49ers.

How would Watson or Stafford fit with the Niners fit?

In the words of noted philosopher Ace Ventura: Like a glove. Both possess the type of physical ability, as well as a track record of production and durability that would make sense for the 49ers.

Perhaps lost in the Niners’ plan to sign Kirk Cousins after the 2017 season was they’d spent a lot of time with Watson in the run up to the 2017 draft. They had a private workout with him at Clemson and he was one of the team’s 30 pre-draft visitors. But the 49ers passed on Watson and every other first-round quarterback because they had their eyes on Cousins, although that never happened because of the trade for Garoppolo.

Nearly four years later, it’s easy to picture Watson thriving in Shanahan’s offense. His mobility and deep ball accuracy (45.4% completion rate on throws 20-plus yards downfield is second in the NFL since he entered the league), would allow the offense to take a leap forward and stress defenses in ways heretofore unseen.

What’s more, the cap charge for a team acquiring Watson is around $10 million. Garoppolo is scheduled to count $26.9 million against the cap next year and the Niners would incur $2.8 million in dead money by trading or releasing him. The money saved at quarterback would give the Niners a sizable chunk to re-sign left tackle Trent Williams.

Stafford isn’t quite the value of Watson given his age and a salary cap number — $20 million for 2021 and $23 million for 2022. But that’s still a relative bargain for a guy who has started 165 games and thrown for 45,109 yards and 282 touchdowns since he was drafted in 2009. Stafford also possesses one of the league’s strongest arms, ranking eighth in the NFL on throws traveling 20-plus yards in the air since entering the league.

Shanahan has said if you’re going to move on from one player, the guy replacing him must be a clear upgrade. There’s no debating Watson represents that for the 49ers. The same is true of Stafford, albeit to a lesser degree.

For either player, the Niners would seem to have plenty of appeal. San Francisco’s roster is loaded, although injuries ravaged the Niners a season after reaching the Super Bowl. Give Watson or Stafford a strong running game, pass-catchers such as George Kittle, Deebo Samuel and Brandon Aiyuk and a stout defense, and the Niners would be contenders, if not favorites again in the NFC.

What could it cost?

A lot, especially for Watson, though Watson’s no-trade clause could alter that.

Finding a comparison for Stafford is easier than for Watson, though the closest comp for either player is probably Carson Palmer, who requested a trade from the Cincinnati Bengals after the 2010 season. Palmer threatened to retire if his demand wasn’t met. The sides engaged in a standoff with Palmer not reporting to camp and the Bengals spending a second-round pick on Andy Dalton.

Finally, the Bengals realized Palmer was an asset and they could at least get value for him in a trade. They dealt him to the Oakland Raiders for a first-round pick in 2012 and a second-round selection in 2013.

Undoubtedly, Watson would garner much more in a trade. The Niners could move draft picks and they have star players, though they’d be extremely hesitant to move someone like end Nick Bosa or linebacker Fred Warner.

Watson holds some agency because of that no-trade clause. How far would he be willing to go to land where he wants?

If Watson was willing to sit out, he could essentially choose his destination. Sure, Watson wouldn’t get paid and would incur some hefty fines if he didn’t report, but it does the Texans no good to have an unhappy Watson sitting on their roster and not participating. More often than not, when star players demand trades, they get traded eventually.

Since Watson has that no-trade clause, it stands to reason he’d use it to land in a favorable destination where he would be happy with the culture and have a chance to win Super Bowls right away. The fewer teams involved, the lower the presumed price, but it wouldn’t be cheap. It’s hard to envision a scenario in which a potential trade doesn’t include at least three first-round picks and that’s probably just a starting point.

Stafford’s price should be considerably lower, probably closer to Palmer’s once was, but even that might not be as cheap as some might think given there are a number of teams such as Indianapolis, Chicago, Denver and possibly even New Orleans and Pittsburgh that could be in the mix.

How realistic is it for the 49ers?

If the Texans get a bidding war, there’s little chance the 49ers could outbid teams like the Miami Dolphins or New York Jets. Those teams have top-three picks (which the Texans could use to draft Watson’s replacement) and multiple first-round selections in this year’s draft. Barring a willingness to trade some of their own young stars, perhaps more than one, in addition to their picks, it’s hard to see the 49ers competing.

Which means there’s really only one scenario in which a Watson-49ers marriage could happen: Watson demands a trade either specifically to the 49ers or includes them on a short list of teams that doesn’t include teams with more to offer.

So, while Watson to the Niners would be must-see TV, Stafford is a more realistic possibility, so long as the cost to acquire him doesn’t go to a place the 49ers aren’t willing to visit. And if it does? The 49ers remain prepared to run it back with Garoppolo and bolster the backup spots behind him.