What does trading Matthew Stafford mean for the Lions in value and their future QB? – Detroit Lions Blog 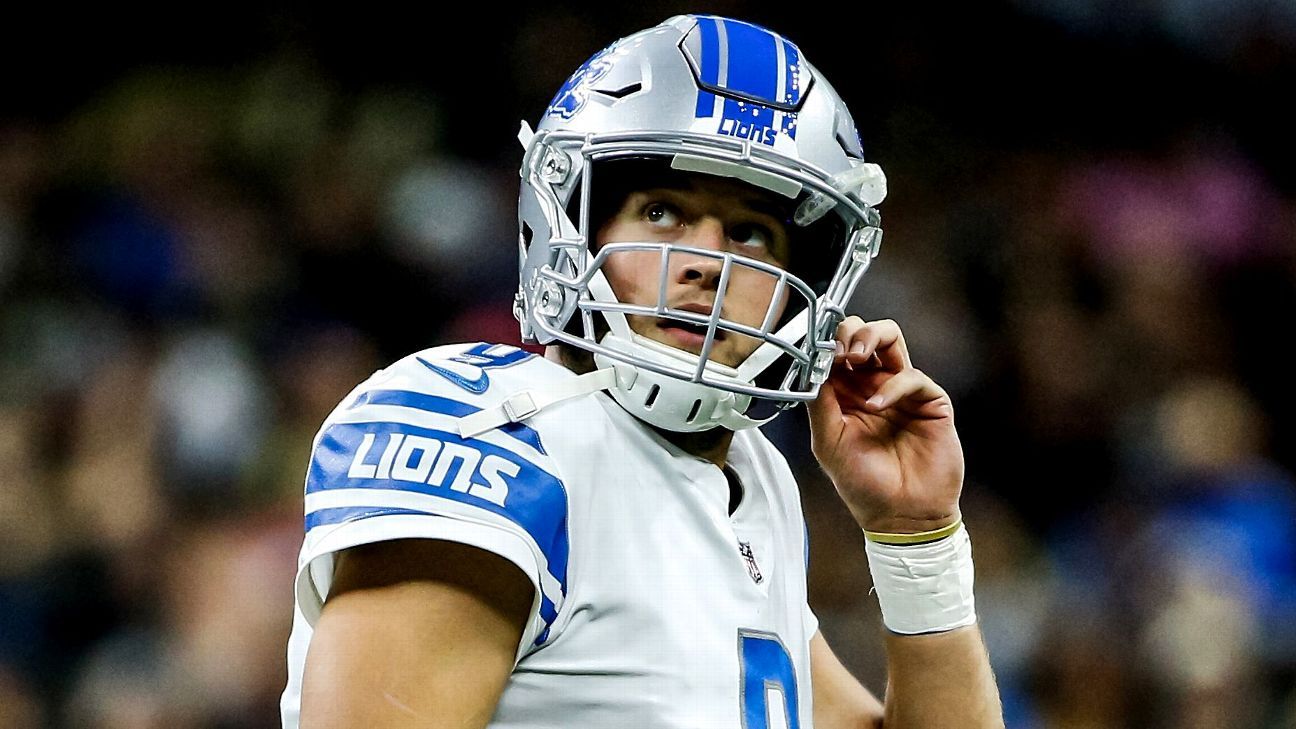 
ALLEN PARK, Mich. – Inside Ford Field toward the end of last season, there was a large white mural with Matthew Stafford on it, his back turned with his left arm raised — index finger pointed in the air.

It was a striking image then, what with few fans allowed inside the stadium all season, but one had to wonder if that image would be around in 2021. Bob Quinn and Matt Patricia were gone. It was clear a new regime was coming, and after years of saying he wanted to be the quarterback of the Detroit Lions, Stafford was giving less concrete answers as last season wound down.

We all know why now: Stafford has asked to be traded, something he believes will be beneficial for both parties. And while a source familiar with the situation said Detroit wants “fair market value,” it’s hard to believe the Lions won’t get that for a soon-to-be-33-year-old quarterback on a largely friendly contract for the next two seasons.

So barring something completely unexpected, Stafford has finished the Detroit portion of his career. As the Lions start to seek out suitors for their all-time passing leader, it is time for the franchise to figure out what it might be able to get back and who might be under center for the Lions when they start playing in 2021.

Not every team is going to reach out to inquire about Stafford. Many are set at quarterback or are in too similar of a situation to be viable: Buffalo, Baltimore, Cleveland, Cincinnati, Tennessee, Kansas City, the Los Angeles Chargers, Green Bay, Minnesota, Tampa Bay, Atlanta, Seattle and Arizona.

That still leaves half the league that either Detroit might reach out to or might come calling to the Lions. This should give Detroit an advantageous situation to create leverage with a combination of much-needed draft capital and perhaps even a player or two in exchange for Stafford.

Detroit needs the picks. New general manager Brad Holmes wants to build through the draft and has just five picks at the moment for the 2021 draft. With many holes on defense (basically every position) and now questions on offense at quarterback, running back, receiver and to an extent on the offensive line, the more chances to bring in young talent, the better.

The Lions should receive at least a first-round pick in return for Stafford unless they can somehow negotiate Stafford and their own picks into Houston’s Deshaun Watson and might be able to push for multiple first-rounders or a package of multiple picks over multiple years.

• Arians’ risks have Bucs in Super Bowl
• ‘Dialed in’ Mahomes leads Chiefs back to SB
• Watson, Stafford would fit 49ers
• Luring Watson not far-fetched for Jets
• What’s next for NFL playoff losers

What that would look like would depend on where Stafford is headed. For instance, teams with major cap concerns (New Orleans, Pittsburgh and Las Vegas) might try to package players with picks to help lessen their own cap woes. And don’t discount the Raiders. Vegas coach Jon Gruden has often been impressed by Stafford, and neither Derek Carr nor Marcus Mariota’s contracts are too onerous. Or, perhaps the Lions take one of them back in return — both are 30 or younger and have starting experience in the league. It’s a wild-card suggestion, but one would have to think Holmes is going to look everywhere for the best offer.

There are also the more likely options: Indianapolis, Washington, New England, San Francisco, Carolina, Denver and Dallas. The Cowboys are intriguing because of the uncertainty surrounding Dak Prescott , and sending Stafford back to his hometown always seemed like a potential pairing. And until Dallas actually signs Prescott, it’s worth Detroit inquiring or Jerry Jones making the call.

The Lions can go many different directions here. Detroit could bring in a veteran quarterback as a bridge to the future to give the Lions some flexibility between this year and next year to find a long-term solution.

Or they can take on a younger quarterback who has struggled elsewhere to see if a change of scenery can be what ignites that player, much like Ryan Tannehill’s move from Miami to Tennessee.

And then there’s the draft, where the Lions will have at least the No. 7 overall pick and the potential of at least one quarterback falling to them. Let’s look at all three of these options.

The bridge: There are many options to consider, and with Anthony Lynn running the offense, Tyrod Taylor would be the place to start.

Taylor was Lynn’s starting quarterback during his one year as offensive coordinator in Buffalo and spent the past two seasons with the Chargers, where Lynn was the head coach. He’s going to know Lynn’s system better than any other quarterback in the league and has experience, throwing for 9,770 yards, 54 touchdowns and 20 interceptions between his time in Baltimore, Buffalo, Cleveland and Los Angeles.

Lynn had Taylor as a bridge — albeit a short-lived one — last season before Justin Herbert took over, so this move makes a bunch of sense.

Chase Daniel already is on the roster for the Lions in 2021, has $1.5 million guaranteed for next season and a manageable cap hit of $5.3 million. Plus new Lions head coach Dan Campbell knows Daniel from their 2017 season together in New Orleans. So it’s a possibility he sticks.

Cam Newton, Joe Flacco, Andy Dalton and Robert Griffin III are all also potential options in this scenario. Jimmy Garoppolo, if the 49ers traded for Stafford, could fit either here or the next category, but Detroit might not want to take on his contract in a trade.

Any of these quarterbacks likely also means drafting the long-term guy either in 2021 or 2022.

The reclamation project: This is where things could get more interesting, between potential trades and free agents.

Much like Taylor, Jameis Winston could be an intriguing option. While he would likely seem to be a possibility to re-sign in New Orleans, perhaps Campbell thought highly enough of him last season working together with the Saints that he’d bring him to Detroit to try and reclaim his career.

Winston has the talent. He completed more than 60% of his passes every year except his rookie season and had a 5,109-yard season in 2019 – during which he threw 33 touchdowns. He also threw an eye-popping 30 interceptions and his discipline and decision-making would need to show major improvement.

Jacoby Brissett showed potential in the two seasons he was a starter in Indianapolis and in both seasons he was thrust into the starting role unexpectedly. Give him an offseason where he knows he’s the starter and perhaps there’s something there.

The Lions are familiar with Mitchell Trubisky, who often seemed to play well against Detroit for parts of his career. For all of his faults, he still completed 67% of his passes last season, threw 16 touchdowns and just eight interceptions and got the Bears to the playoffs. In some ways, the criticism of Trubisky seems to be a victim of where he was drafted as much as what he did on the field.

Sam Darnold could end up being available with the Jets picking at No. 2. Like Trubisky and Winston, the talent has shown up in flashes and a change of scenery could be a career-saver. Darnold completed just 59.8% of his passes with 45 touchdowns and 39 interceptions in New York, but he also played with poor Jets teams in all three of his seasons.

The rookies: Get this out of the way. Barring Jacksonville doing something entirely unexpected, Trevor Lawrence is not an option.

The Lions might have to move up from No. 7 to snag BYU’s Zach Wilson or Ohio State’s Justin Fields, who are considered the two next-best quarterbacks in the class. Capital from trading Stafford could give Detroit enough to do that.

North Dakota State’s Trey Lance — the mystery in this year’s class because he played in just one game in 2020 — is an intriguing option. He never lost in college, going 17-0, and threw only one interception in 307 attempts. He has good size at 6-foot-3, 221 pounds and won’t turn 21 until after the draft. In his one full season playing for the Bison he completed 66.9% of his passes for 2,786 yards, 28 touchdowns and no interceptions while rushing for 1,100 yards and 14 touchdowns.

Further down — likely in the late first or early second round, Alabama’s Mac Jones and Florida’s Kyle Trask could be options worth looking at.