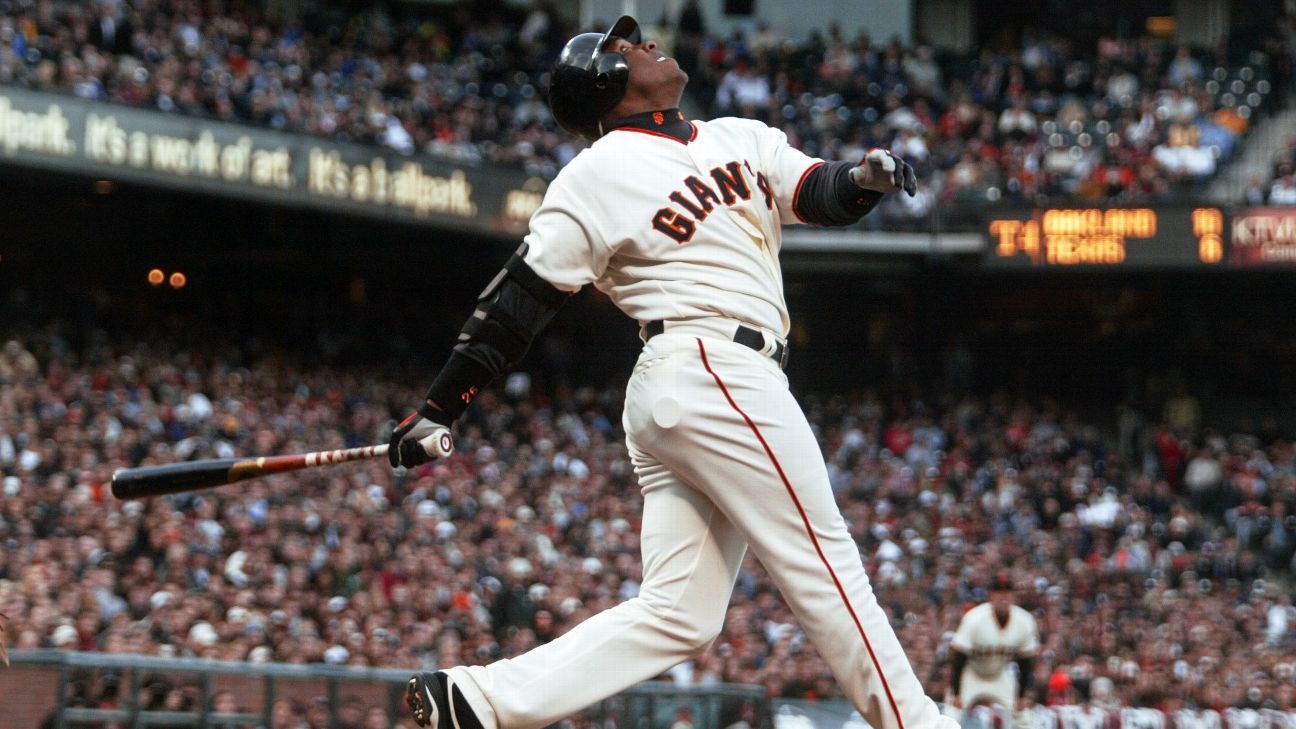 
Baseball Hall of Fame arguments used to be, dare I say … fun? Bert Blyleven is underrated! Jim Rice is overrated! Jack Morris? Show me the back of his baseball card and let’s debate.

Well, welcome to the 2021 Hall of Fame ballot. It includes one player who was suspended for PED use, more alleged PED users, players with domestic violence allegations, one strong candidate with two DUI arrests and one pitcher who has become notorious for his polarizing social media posts.

It is all a chaotic mess. At the heart of the confusion voters face one key question: Are you honoring the person or honoring his career on the field? The ballot instructions do include the direction that, “Voting shall be based upon the player’s record, playing ability, integrity, sportsmanship, character and contributions to the team(s) on which the player played.”

Now, baseball writers are left to weigh the character clause that was mostly ignored until the steroid generation hit the ballot — and this year’s ballot is full of players with significant character questions.

Here is what to look for in tonight’s Hall of Fame voting results, announced at 6 p.m. ET.

Will anybody get elected?

It’s looking like the answer is no. Curt Schilling is the mild surprise here. Schilling received 70.0% of the vote last year, his eighth on the ballot, and he fell just 20 votes short of election. Historical precedent suggests Schilling would be nearly automatic to get that extra 5% needed for enshrinement. Instead, it appears his total will decline.

Thanks to Ryan Thibodaux’s Hall of Fame tracker, we can monitor the vote totals from Baseball Writers’ Association of America members who reveal their ballots — and it’s bad news for Schilling. Over the past few years, his overall total usually drops around 8% after the private votes are factored in, and right now, Schilling is polling right around 75% on public ballots:

Schilling’s vote total had steadily risen in recent years, in part because the ballot weakened as the BBWAA elected 15 players over those five years. Other than PED-stained Barry Bonds, Roger Clemens and Manny Ramirez, Schilling is the strongest candidate on the ballot and easily the best qualified pitcher. Instead, Schilling’s social media behavior, which includes a 2016 tweet apparently endorsing the lynching of journalists that he later deleted, has caught up to him in the form of lost support from writers who previously voted for him. Keep in mind that ballots were cast before his Jan. 6 tweet showing apparent support of the mob violence at the U.S. Capitol.

Do you honor the pitcher who won 216 games, who three times fanned 300 batters, who has more career WAR than Tom Glavine or Jim Palmer or Carl Hubbell or John Smoltz, and who led three teams to World Series titles as one of the greatest postseason pitchers of all time? Are you willing to overlook his post-career actions?

If Schilling doesn’t get in, next year will be his final year on the BBWAA ballot. In recent years, Larry Walker, Edgar Martinez and Tim Raines made it in their final appearance. That’s not a guarantee for Schilling.

What about Omar Vizquel?

Vizquel made big strides last year, finishing with 52.6% of the vote on his third ballot — progress that almost always leads to induction. Then in December, The Athletic published a report in which his wife accused him of domestic abuse. Vizquel denied the allegations — the couple is going through a divorce — but he was taken into police custody in 2016, following an incident at the couple’s home. Some voters had already turned in ballots, but his public vote is down from about 53% to 38.6%.

Vizquel’s on-the-field case also is a divisive one. He was a defensive wizard in the field but with a light stick at the plate. He played more games at shortstop than anybody in major league history, however, and finished with 2,877 hits. In baseball circles, that kind of longevity is enormously respected. After Harold Baines was inducted to the Hall of Fame two years ago, Tony La Russa — a member of the veterans committee that elected Baines — made that case that Baines “was good at 21 and he was good 40.” That rationale applies to Vizquel: He came up at 22 and played until he was 45, winning 11 Gold Gloves along the way.

The belief that Vizquel was the American League’s Ozzie Smith is a bit of a stretch, though. Baseball-Reference credits Smith with 76.9 career WAR as compared to Vizquel’s 45.6. Smith is credited with 239 runs saved on defense versus Vizquel’s 129. We can see this in the raw numbers: Smith’s career range factor (plays per nine innings) is 5.22 as compared to a league average of 4.78 during his career; and Vizquel’s is 4.62 versus a league average of 4.61. Range factor is an imperfect stat, but it helps explain why Smith’s defensive metrics are so much better. (Not that Vizquel is a slouch; he still ranks fifth on the Baseball-Reference list of runs saved at shortstop since 1953.)

Who will make the biggest leap?

Looks like Scott Rolen, now on his fourth year on the ballot. He received 35.3% of the vote last year, but he sits at 66.4% on the public ballots, representing a big increase that puts him on a good path. Rolen is a stathead favorite thanks to his 70.1 career WAR that ranks ninth all time among third basemen. Seven of those ahead of him are in the Hall of Fame, and the eighth is Adrian Beltre, who is a lock when he becomes eligible. That WAR figure relies heavily on some top-flight defensive metrics — Baseball-Reference has Rolen with 140 runs saved on defense, No. 6 since 1953 — but Rolen backs that up with nine Gold Gloves.

Many voters (and fans) will suggest Rolen just doesn’t “feel” like a Hall of Famer. He finished in the top 10 of MVP voting just once (fourth in 2004) and earned down-ballot votes just three other times. Still, his case doesn’t depend entirely on his defense. He is 14th among third basemen in home runs, 13th in RBIs and 10th in batting runs. Yes, his only monster season was 2004, when he hit .314/.409/.598 with 34 home runs for the Cardinals, but Rolen was a terrific two-way player for a long time. As a top-10 all-time player at his position, he is clearly above the line of an average Hall of Famer.

Who else is climbing?

Three players are all gaining support (all undoubtedly helped by the thinning of the ballot):

Helton’s case rests primarily on an incredible five-year peak from 2000 to 2004, when he hit .349/.450/.643 and averaged 37 home runs, 123 RBIs and 7.5 WAR. He had other good seasons, but those five years account for over 60% of his career WAR (61.8, on the low end for a Hall of Famer). I’ve always been lukewarm about Helton due to the relatively short peak of dominance and the fact that many Rockies put up huge numbers in those days. Helton also has been arrested twice for DUI, the second time in 2019.

FanGraphs’ Jay Jaffe looks at the HOF cases of the best player for each team who hasn’t yet gotten into Cooperstown. League: AL

Jones is 10-time Gold Glove winner and regarded as one of the best defensive center fielders of all time, even though he was essentially done at age 30. Baseball-Reference’s defensive metrics have Jones saving 230 runs in his career — the most of any center fielder since 1953. No. 2? Willie Mays. That isn’t as outlandish as it might seem. Look at Jones’ career range factor as compared to that of Mays:

(To be fair, Mays played longer, so the career range factor dipped off at the end. Still, the peak numbers also favor Jones.)

Jones slammed 434 home runs, and he had seven 30-homer seasons. His career WAR of 62.7 is still on the low end for a Hall of Famer, and the decline after turning 30 left a disappointing taste to his career. He ranks 13th in career WAR among center fielders, but there also are others out there (although not on this ballot) whom I would argue are better choices — including contemporaries Kenny Lofton and Carlos Beltran, as well as perhaps Jim Edmonds and Bernie Williams.

Jones also was arrested for domestic violence in 2012, after his final major league season.

Wagner finished with a 2.31 ERA and 422 saves (sixth all time). He was certainly more dominant at his best than Trevor Hoffman, but Hoffman finished with 601 saves — the longevity factor. Still, the recent elections of Hoffman and Lee Smith (via the veterans committee) should eventually help Wagner get over the top. Of note: Bill James just wrote up a piece on the best relievers of all time, and Joe Nathan, who hits the ballot next year, ranks higher than Wagner via James’ formula.

What will Jeff Kent’s percentage be?

Not high enough to get in — definitely not for 2021, and unlikely for 2022 or 2023. In his eighth year on the ballot, Kent needs to start making a big push. He received 27.5% last year, but that’s not an impossible position to make a run from. Look at Walker and Martinez from Years 7 to 10 on the ballot: Walker — 21.9, 34.1, 54.6 and 76.6; Martinez — 43.4, 58.6, 70.4 and 85.4. Walker was lower than Kent, so Kent’s hope is a Walker-like surge. But Kent is languishing at just 27.9% on the public ballots, basically unchanged from last year, so even though he has the most home runs ever by a second baseman and 1,518 RBIs (more than not only Helton, Jones or Rolen, but more than, oh, Vladimir Guerrero or Mickey Mantle or Eddie Mathews or Mike Piazza). Put it this way: Kent is 54th all time in RBIs. Everyone ahead him is in the Hall of Fame, will get there or would be there if not for PEDs except Fred McGriff.

I guess you have to draw the line somewhere, but it’s interesting that Vizquel’s longevity is of considerable importance to voters while Kent’s is dismissed. Kent’s career WAR of 55.4 isn’t much below that of Helton or Jones, but his vote totals suggest that many younger voters are clearly putting a lot of weight behind it. Kent’s lack of big-peak seasons also is a factor, as he had just three five-win WAR seasons. 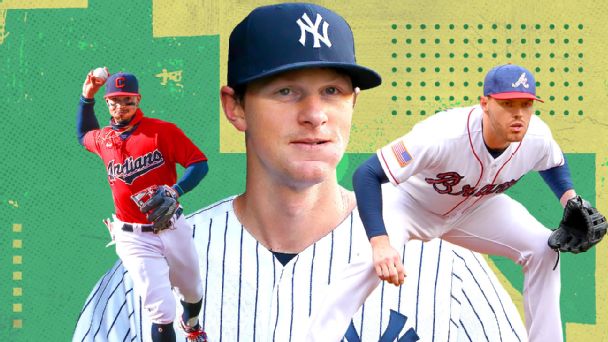 Buster Olney sets up the season with his annual position-by-position rankings.

In the bigger picture, The Athletic’s Joe Posnanski pointed this out this idea in a recent essay about McGriff. To some extent, are we getting to a “What’s the point?” with these borderline candidates? The BBWAA never elected McGriff, but he will clearly get in as soon as he hits the veterans committee ballot (as recently happened with Morris, Lee Smith and Alan Trammell). Kent is like McGriff: a respected player with some impressive counting stats who is pretty much a lock for the veterans committee. You can say the same about most of the borderline candidates … well, those without character issues.

Which gets us to …

How will the alleged PED guys do?

This group includes one confirmed PED user in Manny Ramirez (twice suspended for positive tests), plus this group: Barry Bonds, Roger Clemens, Gary Sheffield and Sammy Sosa, whose accomplishments are clouded by PED association. Bonds (60.7% last year), Clemens (61.0%) and Sosa (13.9%) are each now on their ninth ballot. Time is running out.

Bonds and Clemens are currently polling at 72% on the public ballots, which is higher than the 64% they received last year, so while they’re making incremental gains, they aren’t doing it fast enough. It appears their cases will eventually go to the veterans committee, which has already reviewed Mark McGwire’s case and said, “No.” Bonds and Clemens, of course, are on another level as players, but the current climate suggests a group of old players, executives and sportswriters will not be as generous as the younger members of the BBWAA.

The stock market is at peak dumb: Etsy soars because Elon Musk tweets about it