Pau Gasol, Kobe Bryant and the bond of brothers 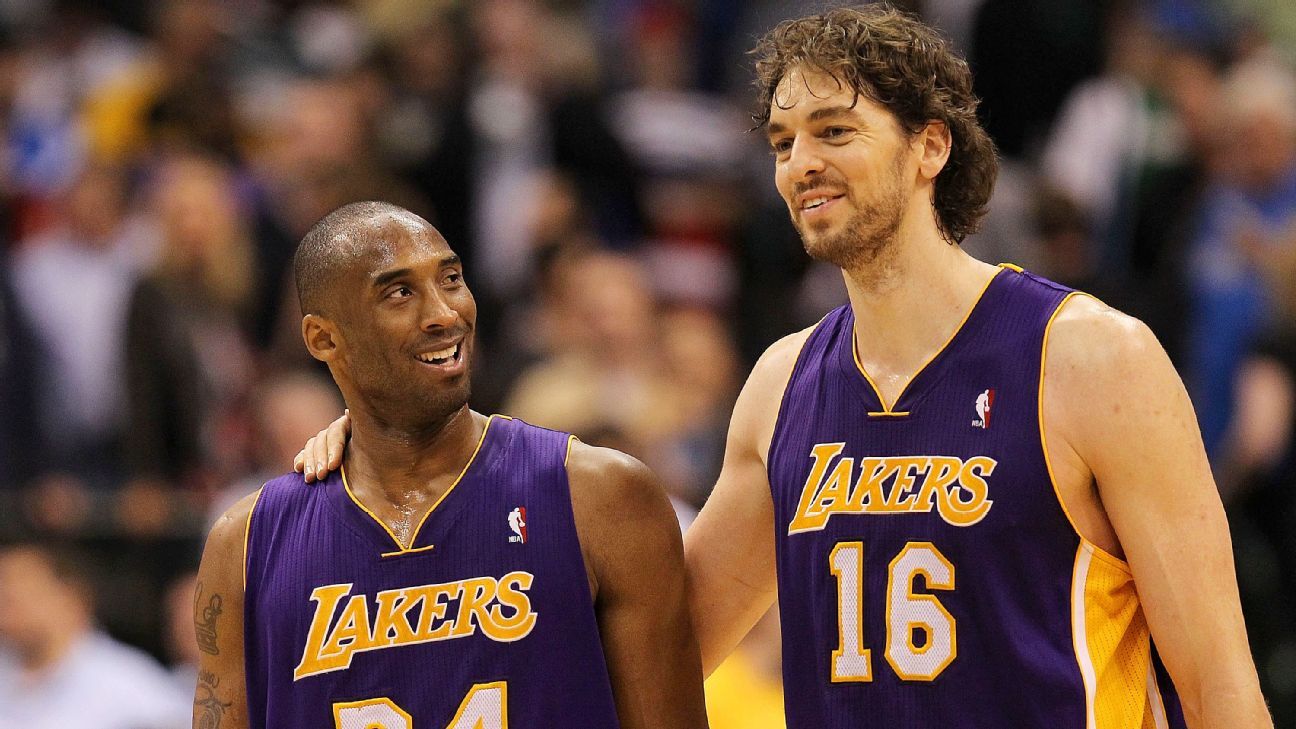 
Kobe Bryant liked to tell people he didn’t have time for friends. Not in the conventional way most people have friends in which they talk regularly or grab a meal when they’re in the same part of town.

Pau Gasol heard him say that all the time.

Underneath all that tough talk was a sensitive father to four daughters who would always be there when Gasol called.

“He’s the closest thing to a big brother that I’ve had in my life,” Gasol said.

They didn’t take selfies together when they’d meet up for dinner in the later years of their careers, or after Bryant retired from the NBA in 2016. The only trace of just how close Bryant and Gasol’s relationship had grown came mostly in the form of #hermano — Spanish for brother — hashtags on Twitter or Instagram.

Gasol didn’t need the shoutout. He already knew how close his and Bryant’s friendship was. But he is proud he got Bryant to open up and show the world that side of him.

“You could see his toughness, his grit, his desire, his hunger, the Mamba mentality. … But he had a very kind, very loving side, too.”

“You could see his toughness, his grit, his desire, his hunger, the Mamba mentality — be the best at all times, work harder than anyone else,” Gasol said. “But he had a very kind, very loving side, too.”

In the latter stages of his career, Bryant started dropping the veil ever so slightly and letting the world see what Gasol did.

“I’m more naturally inclined to show my softness from a personal level and an emotional level, and I think that’s something maybe I influenced him to in a way, “Gasol said. “I’d say, ‘It’s OK to be normal or act kind and vulnerable or soft at times. We don’t have to be so hard all the time and be on edge all the time.'”

Matt Barnes didn’t know it was Gasol who’d gotten Bryant to open up, but he sure as hell noticed when it started happening.

“I remember one time, we were on a bus in Phoenix and I asked Kobe, ‘Why doesn’t the rest of the world get to see how cool you are, motherf—er?” said Barnes, who played with Bryant and Gasol from 2010 to ’12. “I literally asked him that question in front of everybody. And Kobe was like, ‘I can’t show these motherf—ers that.’

“I think that was a part of that whole Mamba mentality. But when you got him to put his guard down, or once you were able to penetrate the wall, you know, Kobe was cool as s—. But he had to let you see that side.”

It is still hard for Gasol to talk about Bryant’s death. Mention Jan. 26 and Gasol’s mind races back to the moment he first heard about the helicopter crash that killed the former Los Angeles Lakers great, his daughter Gianna and seven others.

He was in Spain at the time, with his now-wife, Cat, driving home when her phone started getting news alerts and text messages.

“You start getting in this trance where you’re completely frozen,” he said. “You’re just stuck in complete shock. You can’t believe it. I still for days, weeks, I still didn’t want to believe it.

“You still thought that Kobe could have gotten out of that accident by his own feet and carried his daughter — and if there were any other survivors — with him to the hospital.

“We had that perception of him as that strong, as that invincible. If someone could have survived it, it was him.”

Gasol said he cried for days, numb and heartbroken and shocked all at once. But very quickly he knew what he needed to do.

“We wanted to be close to Vanessa and the kids and be there, as Uncle Pau, for whatever they needed.”

Pau Gasol on the days after the helicopter crash

“We wanted to be close to Vanessa and the kids and be there, as Uncle Pau, for whatever they needed.”

The Gasols stayed near the Bryants’ home in Orange County for several months, checking in on the family often and trying to support them through the unthinkable tragedy.

The Gasols and Bryants went on a boat trip through San Francisco Bay in August and got dressed up as Star Wars characters for Halloween. And when the Gasols’ first child was born in September, they named her after Gianna.

“My daughter’s full name is Elisabet Gianna Gasol,” he said. “It’s a way, not just to honor Gianna, but to always have them present. They’re our family and in which way can you have them more present than to have it in your daughter’s name or your son’s?

“We had more issues coming up with her first name than with her middle name. It represents so much, the name. The kindness, the heart that Gianna had, the talent, just with the toughness that she showed. Her dad and her mom in her, it’s something that has a lot of meaning to us, and that’s why she’s named Elisabet Gianna.”

Gasol had gone to Gianna Bryant’s basketball games over the years and watched as her talent blossomed.

“She could have changed women’s basketball,” Gasol said. “Hopefully that will still happen, but she was that meaningful, that important to the game in what she could have meant. So I think it’s on us to have her present and to not let her passing take away from how much she could have impacted.”

That’s what Gasol finds comfort in now, nearly a year after Kobe’s and Gianna’s death.

There’s still sadness and shock. He says he will never ride in a helicopter.

“Every time I see one, it just triggers me,” he said.

But Gasol said he knows he is doing exactly what his older brother would’ve wanted him to do: looking out for Vanessa and her three daughters, and helping others learn from the legacy Kobe and Gigi left behind.

Bryant’s wanting to connect to others reminded Gasol of the way he’d first connected with him. They’d known each other as competitors early in their careers, as Bryant was winning championships with Shaquille O’Neal in L.A. and Gasol was trying to get the Memphis Grizzlies over the hump.

Then a chance encounter changed the course of both of their lives. In the summer of 2007, the Bryants happened to bump into Gasol while vacationing in his native Barcelona, as he was working out in their hotel gym.

“So I said, ‘Well, maybe one day we’ll play together. You never know.’ In my mind, I couldn’t register the Grizzlies trading me to the Lakers. But then, a few months later, when I thought it just wouldn’t happen, it did. And I ended up with him and the Lakers in a perfect time where things just clicked and came together right away, and we had incredible times.”

However, there was no celebration after the stunning midseason trade, which would result in three straight NBA Finals appearances and two titles for the Lakers.

No, Bryant knocked on Gasol’s hotel room door at 1:30 in the morning and told him how it was going to be.

“I landed in Washington that first night to join the team, and after my physical he came to my room to tell me, ‘Hey, I’m very excited to have you. Very happy that you’re here, but now let’s go win a championship,'” Gasol said.

“I wanted the chance badly,” he said. “That was my chance, and I was not going to waste it.”

During their first game together, Bryant was even more to the point. He fed Gasol early to get him going and often spoke to him in Spanish on the court — so their opponents couldn’t understand them — and he generally kept up that demanding nature every minute of every game in the six-plus seasons they played together.

“He could be hard. There’s no question about it,” Gasol said.

SportsCenter will be re-airing the special bond of Pau Gasol and Kobe Bryant throughout the day on Tuesday — the one-year anniversary of Bryant’s death.

That’s a nice way of putting it.

“There would be times where I’d have to, like, go put my arm around Pau and tell him it’s going to be all right,” Barnes said. “Because [Bryant] would cuss that motherf—er out in any language you can imagine.”

This is how Gasol will remember Bryant as a player. The grit, the determination, the direct shots through the media. (Remember that whole black swan-white swan narrative Bryant spun to motivate Gasol to be more aggressive and physical?)

But it is not how he will remember his older brother.

“Our relationship seemed to be meant to come together for some reason,” Gasol said. “And now after his loss and Gigi’s, it just brought us that much closer to what he meant to me, who he was, what he provided to my life and obviously his family and now my family, as I consider them.

“He was someone that I’ll miss for the rest of my life, but I’ll have him present in everything that I do.”