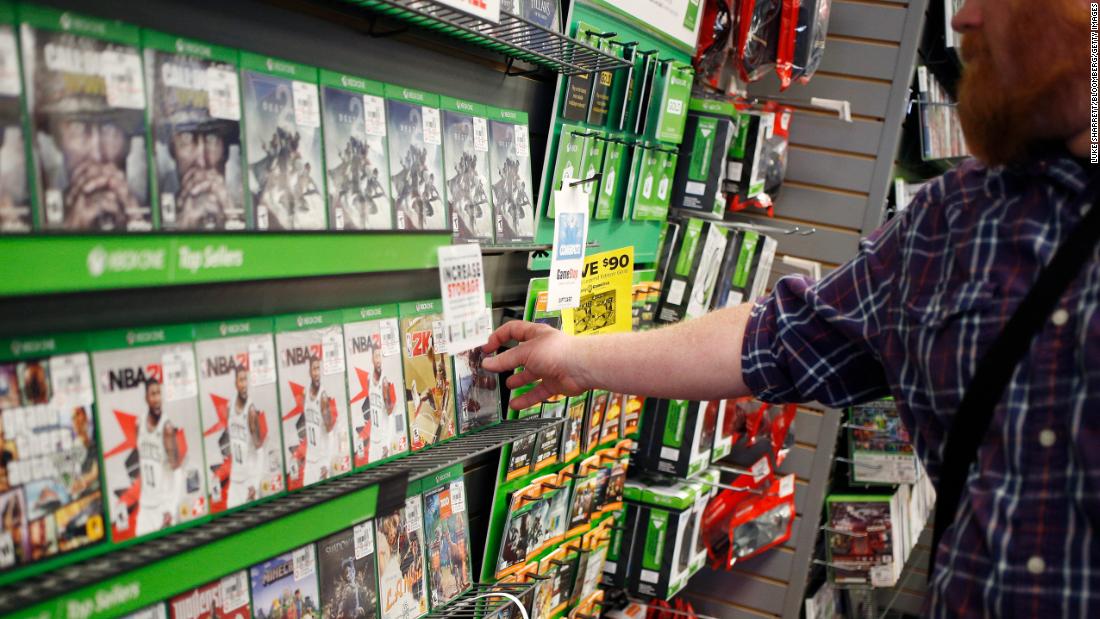 What’s happening: Shares of GameStop (GME), a legacy company whose stores are often located in struggling malls, have soared dramatically over the past two sessions as day traders push the stock with growing fervor. The stock, which closed out 2020 at $18.84 per share, finished the day at $76.79 after trading was halted multiple times due to volatility. At one point, it climbed to nearly $160, a record high.

You read that correctly. GameStop, which is expected to lose money this year and next, has more than quadrupled in value in under a month because it’s effectively become a meme stock. Since the beginning of 2020, it’s jumped more than 1,100%, outpacing even Tesla’s gains. Shares are up another 20% in premarket trading.

Investors on social media had been arguing that GameStop was seriously undervalued and cheered earlier this month when the company added Chewy founder Ryan Cohen, who has been pushing a digital overhaul, to its board. Now, the focus is on momentum, as small investors hope the hype can help the stock keep rising.

It’s evident, however, that the saga has grown into much more than an argument over the future of a video game retailer, or the merits of different trading approaches. As no-fee apps like Robinhood democratize access to financial markets, some are reading it as a generational fight between the old and new guard of the investing world.

Users on Reddit cheered when veteran short seller Citron Research said it would stop commenting on the stock, citing harassment from GameStop’s backers. Melvin Capital Management, which bet against GameStop’s rise, has had to accept an infusion of cash after suffering steep losses, the Wall Street Journal reports.

“As someone who started trading stocks in the late ’90s in college, I would always remember watching when the small retail trading groups would get crushed by hedge funds and savvy short-sellers,” Oanda analyst Edward Moya said in a note to clients this week. “What happened with GameStop’s stock is a reminder of how times are changing.”

“Starts opening r/WSB with my usual morning tabs,” market strategist Michael Antonelli of R.W. Baird tweeted Monday, referring to the Reddit message board where much of the GameStop action has been coordinated.

Traders on such platforms have been plugging other stocks with major results, too. BlackBerry shares, another fan favorite, are up more than 170% in 2021. They jumped 28% on Monday alone.

Big picture: The wisdom of such trading decisions is certainly debatable. After all, it’s near impossible to argue that GameStop’s value has actually increased exponentially in a matter of weeks. Some gains are also attributable to a so-called “short squeeze,” as those who bet against the stock rush to buy in so they can cover some of their losses.

But once the GameStop dust settles, expect Wall Street’s asset managers to watch where the retail trading hive mind wanders next. Clearly, it can have an impact.

Janet Yellen has been confirmed. Now she gets to work

Lawmakers confirmed Janet Yellen as Treasury secretary on Monday, making her the first woman in American history to hold the position.

That could be a problem, given opposition to parts of the package from Democrats and Republicans.

The latest: Members of both parties expressed reservations about spending so much money on a Sunday call with Brian Deese, head of the National Economic Council, multiple aides told my CNN colleagues.

“It seems premature to be considering a package of this size and scope,” Sen. Susan Collins, a moderate Republican from Maine, said in a statement.

While lawmakers acknowledge more money for testing and vaccines is essential, billions in state and local funding, $1,400 stimulus checks and raising the federal minimum wage to $15 an hour are proving more controversial.

Conversations in the coming days will test Biden’s commitment to promoting bipartisanship.

Biden and Yellen are angling to get members of both parties on board. But Vermont Sen. Bernie Sanders, the incoming chairman of the Senate Budget Committee, said Sunday that Democrats would use a procedural tactic to pass major parts of the measure if Republicans don’t budge. Biden didn’t rule the method out on Monday.

Investor insight: With Democrats in control of both houses of Congress and the White House, investors have been banking on the swift passage of additional stimulus measures. As the battle lines are drawn, some are getting nervous.

“[This] seemed to remind markets of the underlying risks to a market trading at the highs,” he said in a note to clients Tuesday.

Delays over delivering vaccines from AstraZeneca (AZN) and Pfizer (PFE) in Europe are a harsh reminder that successful vaccination campaigns remain dependent on output from the private sector.

Government leaders in Europe are furious, claiming the holdups will have serious consequences.

“The European Union wants the ordered and pre-financed doses to be delivered as soon as possible,” EU Health Commissioner Stella Kyriakides said in a statement. “And we want our contract to be fully fulfilled.”

Big picture: The full consequences of the delays will become apparent in the coming weeks. Pfizer said it will resume deliveries as scheduled this week after upgrading its plant in Belgium so it can churn out more doses; problems at AstraZeneca, which pointed to lower-than-expected yield at a European site, are believed to be more severe.

The situation highlights how fragile vaccine supply chains are as they get up to speed, and underscores the risks to estimates from economists and investors about when life will return to normal.

“We will have more of these ups and downs until we get to a stable process,” Prashant Yadav, a medical supply chain expert and senior fellow at the Center for Global Development, told me.