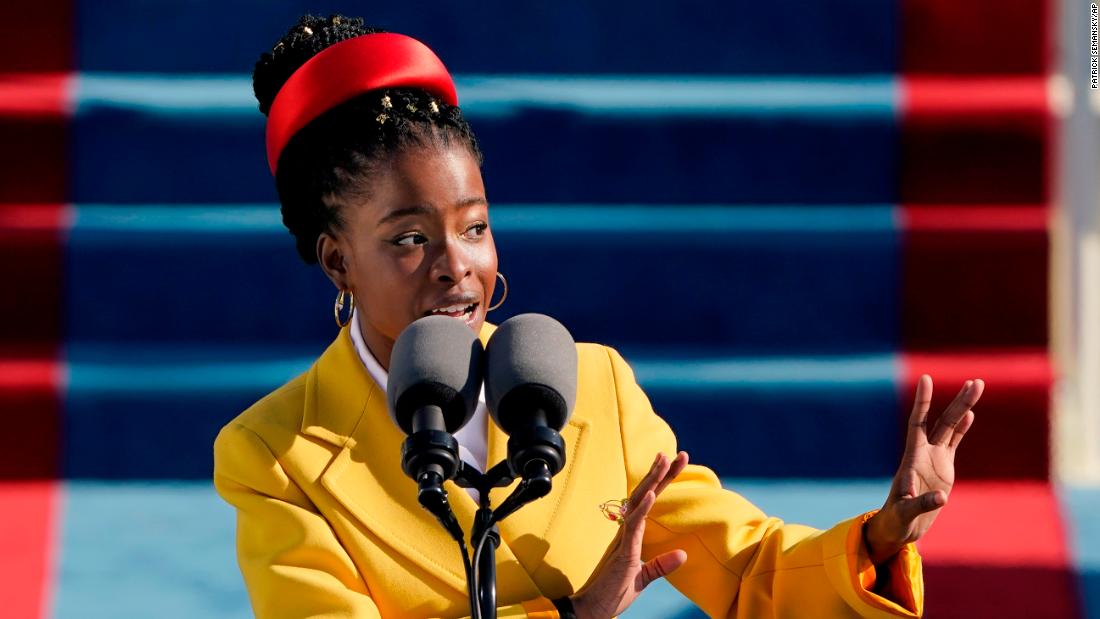 Less than a week after enrapturing audiences at President Joe Biden’s inauguration ceremony, America’s youth poet laureate Amanda Gorman has signed with one of the world’s biggest modeling agencies.

On Monday, the 22-year-old Harvard graduate completed a deal with IMG Models, which represents fashion heavyweights like Kate Moss and Gisele Bündchen, the agency confirmed to CNN.

Gorman was one of the breakout stars of last week’s presidential inauguration, where she read her powerful poem “The Hill We Climb.” As well as moving onlookers in Washington and around the world, the Los Angeles native also impressed with her vivid fashion choices.

Amanda Gorman speaks at the inauguration of US President Joe Biden at the U.S. Capitol on January 20, 2021. Credit: Patrick Semansky/AP

In a yellow double-breasted coat by Italian designer Miuccia Prada and a red satin Prada headband, the poet and activist stood out against the more muted crowd behind her. She completed the outfit with jewelry — gifted to her by Oprah Winfrey — by independent designers including New York-based brand Of Rare Origin and the Greek jewelry maker Nikos Koulis.

In the days since being thrust into the global spotlight, Gorman has made a number of high-profile public appearances. CNN’s Anderson Cooper said on air that he was “transfixed” by the poet during an interview shortly after the inauguration. During a virtual appearance on “The Ellen DeGeneres Show” on Tuesday, meanwhile, DeGeneres “endorsed” Gorman for president, though she is still 13 years below the minimum age required for a presidential run.
Gorman’s forthcoming books, “Change Sings: A Children’s Anthem” and “The Hill We Climb and Other Poems,” are currently at the top of Amazon’s bestseller list.

As well as representing full-time models, IMG has a variety of figures from the entertainment world on its roster, including Chrissy Teigen and Selena Gomez, as well as musicians, actors and sport stars like Naomi Osaka. The agency’s latest deal will see it develop endorsements and editorial opportunities for Gorman in the fashion and beauty sectors.

Though Gorman has yet to issue a statement about the deal, she recently spoke to Vogue about her interest in fashion. In an interview published shortly before the inauguration, she told the magazine that she would be incorporating her “own type of symbolism” into last Wednesday’s outfit.

“(Fashion) has so much meaning to me, and it’s my way to lean into the history that came before me and all the people supporting me,” she is quoted as saying.

Peter Bol: The Sudanese-Australian runner who lifted a nation

US plans to require Covid vaccine for foreign travellers

Peter Bol: The Sudanese-Australian runner who lifted a…