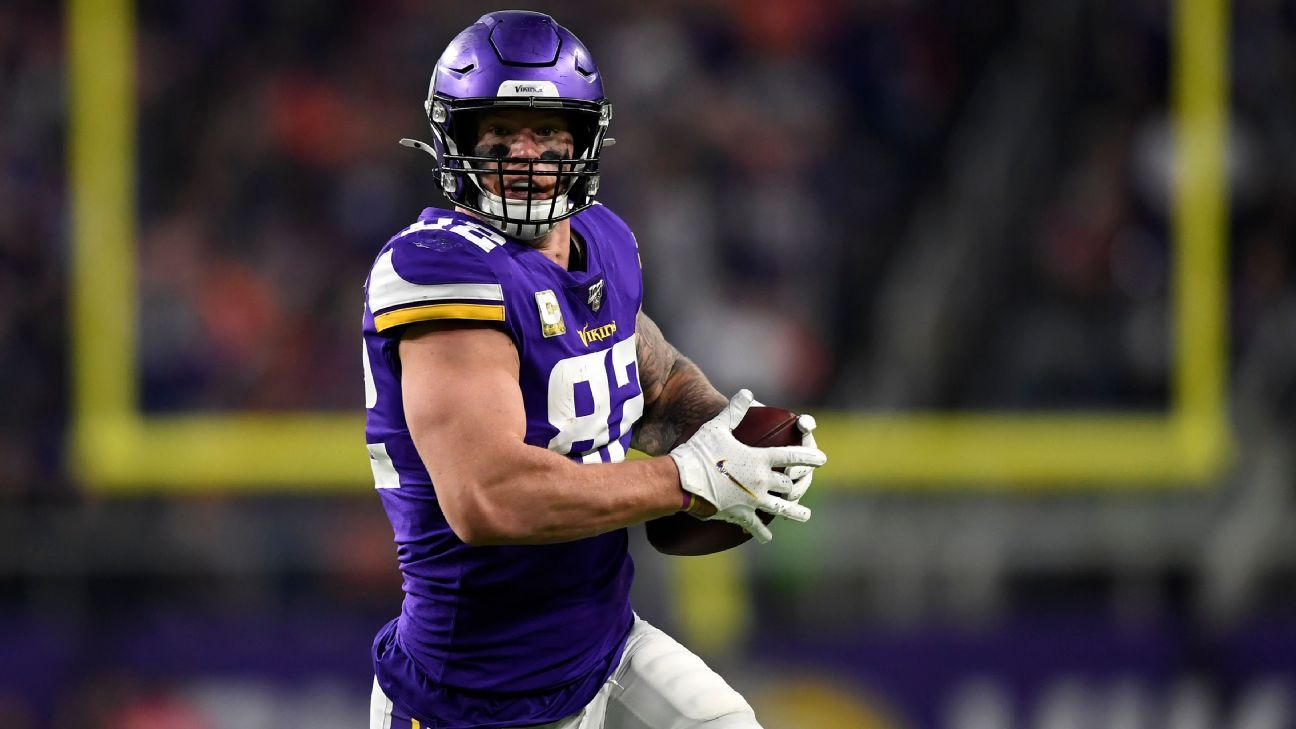 
MINNEAPOLIS — Minnesota Vikings tight end Kyle Rudolph knows his worth, and he won’t be granting any discounts ahead of his 11th season in the NFL.

In an appearance on the “Unrestricted with Ben Leber” podcast, Rudolph expressed displeasure with his role in the Vikings’ offense over the past two seasons, having gone from Minnesota’s second- or third-leading receiver from 2015 to 2018 to being an afterthought in the passing game in 2020.

Minnesota is projected to be $12.8 million over the cap ahead of the new league year and would gain $5.1 million in cap space if it was to release Rudolph this offseason (which comes with $4.35 million in dead money). The Vikings also could restructure Rudolph’s current deal, with three years remaining, to lower his 2021 cap number from $9.45 million to nearly half.

It wouldn’t be the first time the Vikings approached the two-time Pro Bowl tight end with a proposal to restructure. In June 2019, Rudolph reworked his contract into a four-year extension two months after Minnesota used a second-round pick to draft tight end Irv Smith Jr. out of Alabama. Last season, Smith finished third on the Vikings in receiving and touchdowns (365 yards, five TDs).

Rudolph said he isn’t sure how Minnesota’s front office will approach his situation ahead of free agency, but he stood firm with his belief that he should be paid the entirety of what his contract entails.

“Obviously, I’m realistic. I see both sides,” Rudolph said. “If I were [team owners] the Wilfs, if I were [general manager] Rick [Spielman], I’m looking at this situation like, ‘Hey, we’re paying this guy a lot of money and you’re not using him, so why are we continuing to pay him a lot of money?’

“With that being said, I think I’m worth every dime of my contract. That doesn’t mean that I’m used to my potential and I’m used to do what I do well, so it will be interesting over the next few months. Like I said, I have three years left on my contract. I don’t want to go anywhere else. I’ve somehow become a pretty decent blocker because I’ve been forced to. It certainly wasn’t something that I ever did well at any point of my career. Maybe in high school because I was bigger than everyone else, but even then, I just wanted to run around and catch balls.”

“Early on last season, the writing was on the wall,” Rudolph continued. “I saw where our offense was going. I had like seven or eight catches in the first six games. It was just absurd. I was literally blocking all the time.”

Rudolph caught 28 passes on 35 targets in 2020, his lowest output since the 2014 season. He churned of 334 receiving yards and one touchdown, the latter of which was a career low for the former second-round pick.

Rudolph was asked to pass block on 43 snaps last season, down from the 68 pass-blocking snaps he played in 2019. The veteran tight end revealed on the podcast the reason for his late-season injured reserve designation that forced him to miss Weeks 13 to 17: a Lisfranc sprain in his foot.

Asked what he would do if the Vikings came to him with a restructure proposal that would keep him in the same role he played on offense, Rudolph made it clear he would not agree to a reduced salary for 2021. He is scheduled to make a base salary of $7.65 million next season.

“It wouldn’t happen,” he said. “You only get to play this game for so many years, and I feel like I have a lot of good football left. Now we fast forward, I’ve played these three years on my contract and I’m now 33, 34 and they’re like, ‘Hey, we want to keep you around for a couple years at a much lower number, but we want you to do X, Y and Z help these young guys out’ — sign me up.

“But like I said, at 31, with how I feel physically, with knowing what I can still do … it’s simply a lack of opportunities. In the past, I was the one getting red zone targets. I can’t sign up for that again.”