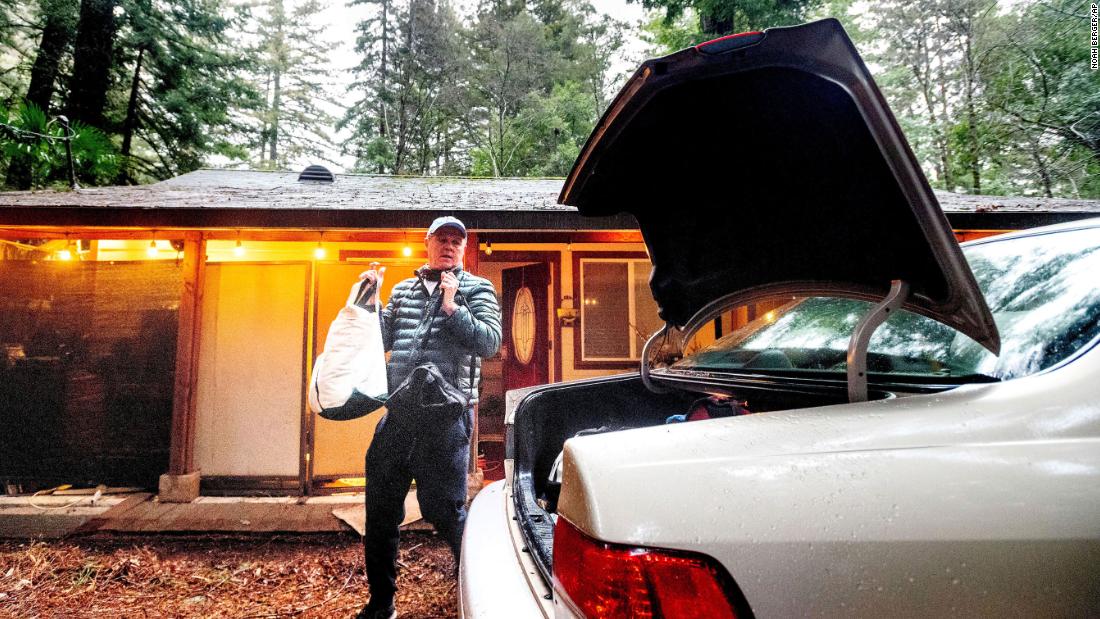 Evacuation orders are in place in parts of San Mateo, Santa Cruz and Monterey counties, warning of an “immediate threat to life.”
The orders come amid forecasts that parts of the Bay Area, and the Santa Cruz and Santa Lucia mountains could see up to 10 inches of rainfall through late Thursday. A high wind warning is also in effect in the Bay Area through Wednesday afternoon. Across the state, more than 8 million people are under flood alerts, with a combination of torrential rainfall along with historic mountain snow pummeling the region.
Santa Cruz County sheriff’s deputies went door to door earlier this week warning residents to leave the area ahead of the storms, according to CNN affiliate KSBW.
“Please be safe and heed the evacuation orders,” the sheriff’s office urged Tuesday on Twitter.

But it’s not just the powerful winds and heavy rain that are worrying officials. Significant burn scars remain from the devastating 2020 wildfire season, meaning there’s potential for mudslides. In Santa Cruz and San Mateo counties, the CZU August Lightning Complex scorched more than 85,000 acres in the fall.

When wildfires consume land, they destroy the vegetation that would otherwise absorb water and hold soil and debris in place. After millions of acres were burned across the state last year, that land is now at higher risk for both flash floods and mudslides.

And mudslides can be extremely dangerous. On average, they kill between 25 to 50 people across the United States every year, according to the United States Geological Survey. Most fatalities result from “rock falls, debris flows, or volcanic debris flows,” according to USGS.
In January 2018, at least 20 people lost their lives, dozens of homes were destroyed and hundreds more were damaged in the wake of mudslides that devastated Montecito.
Resident Tina Button told KSBW her family purchased an RV specifically for situations like this one.

“If we need to leave, we have a place to stay that we don’t have to pay for or worry about finding,” Button said. “Before when we evacuated for the fires, we didn’t know where we were going to go.”

“We cannot stress this enough – IF YOU HAVE NOT ARRIVED TO YOUR DESTINATION BEFORE SUNSET TONIGHT, TRAVEL TO THE SIERRA IS NOT ADVISED,” Caltrans wrote on Twitter Tuesday. “Heavy snow is on tap and whiteout conditions are expected. Please make smart travel choices.”

In Butte County, authorities reported it had begun to snow and warned residents to “take all precautions” when driving.

“Remember to slow down, watch for roadway hazards such as downed trees, power lines and other hazards,” the Butte County Sheriff’s Office said.

CNN’s Joe Sutton and Sarah Moon contributed to this report.

TikTok is laying off employees in India as ban becomes permanent

Video: Used car prices are dropping and tips on the tipping debate on CNN Nightcap