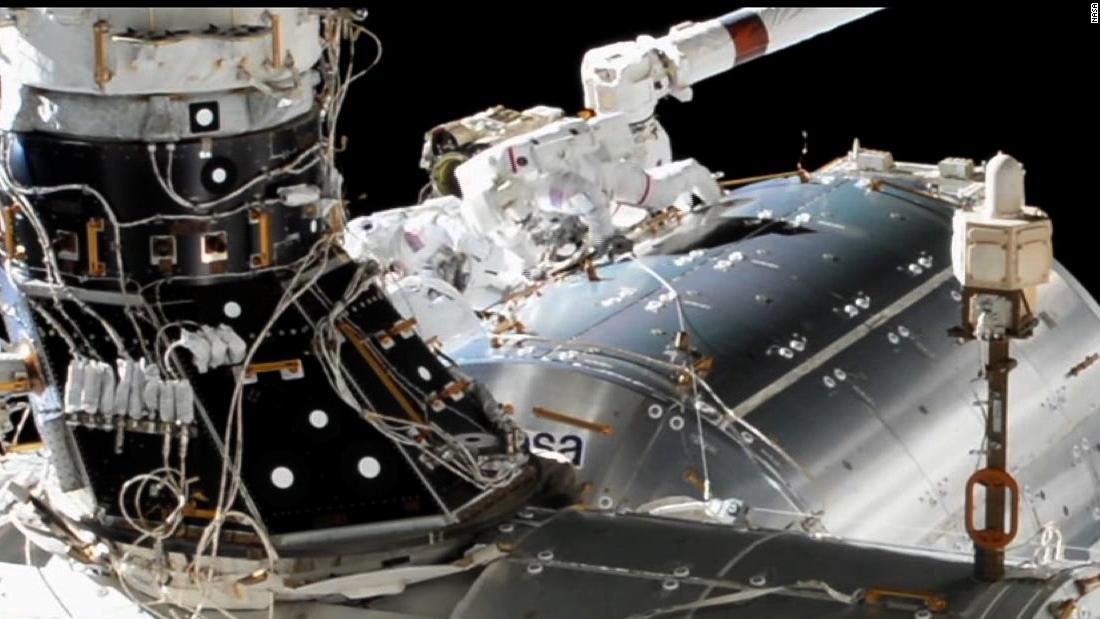 It is the first spacewalk experience for Glover, who is a few months into his first spaceflight on the station.

“What a beautiful view,” Glover said after he began the spacewalk.

This is the third spacewalk for Hopkins, who previously completed two spacewalks during his first six-month venture to the space station from September 25, 2013, to March 10, 2014.

The spacewalk is being broadcast live on the NASA website and officially began at 6:28 a.m. ET. It is expected to last for six and a half hours.

This is the 233rd spacewalk in support of the space station.

The astronauts are focused on completing the installation of Bartolomeo, the newest payload hosting station outside the European Space Agency’s Columbus module. They will complete antenna and cable rigging to hook up power and data connections.

The Bartolomeo platform, named after the younger brother of Christopher Columbus, is the first instance of a European commercial partnership that offers a place to conduct science and technology demonstrations outside of the space station, according to the European Space Agency.

The Columbus module will also be upgraded with a terminal that provides an independent high-bandwidth communication link for European ground stations.

Hopkins and Glover also have a second spacewalk scheduled for February 1.

The astronauts will install the final lithium-ion battery adapter plate on Monday. This installation wraps up work to complete the replacement of aging batteries outside the station that began in January 2017.

During both spacewalks, Rubins will operate the robotic arm from inside the space station to assist the astronauts as they work outside.

They will focus on other upgrades, like replacing an external standard camera with a new high-definition camera on the Destiny laboratory, and will replace camera and light assembly components needed for the Japanese robotic arm’s camera system, located outside of the Kibo module.

“We’ve been talking about these two EVAs (extra-vehicular activities) for the better part of a year, so we’re excited to see them executed,” said Kenny Todd, deputy manager for the International Space Station Program at NASA during a press conference Friday.

There are more spacewalks planned for the crew near the end of February and beginning of March.

During these long spacewalks, the astronauts go through alternating cycles of day and night every 45 minutes, operating against the hot, bright light of the sun as well as the cold darkness of space. This happens because the space station is orbiting the Earth at 17,500 miles per hour.

While the astronauts don’t feel the direct impacts of extreme cold and heat, there is the potential for a chill, so there are heaters installed in the astronauts’ gloves to keep their hands warm, said Vincent LaCourt, spacewalk flight director at NASA for the February 1 spacewalk.