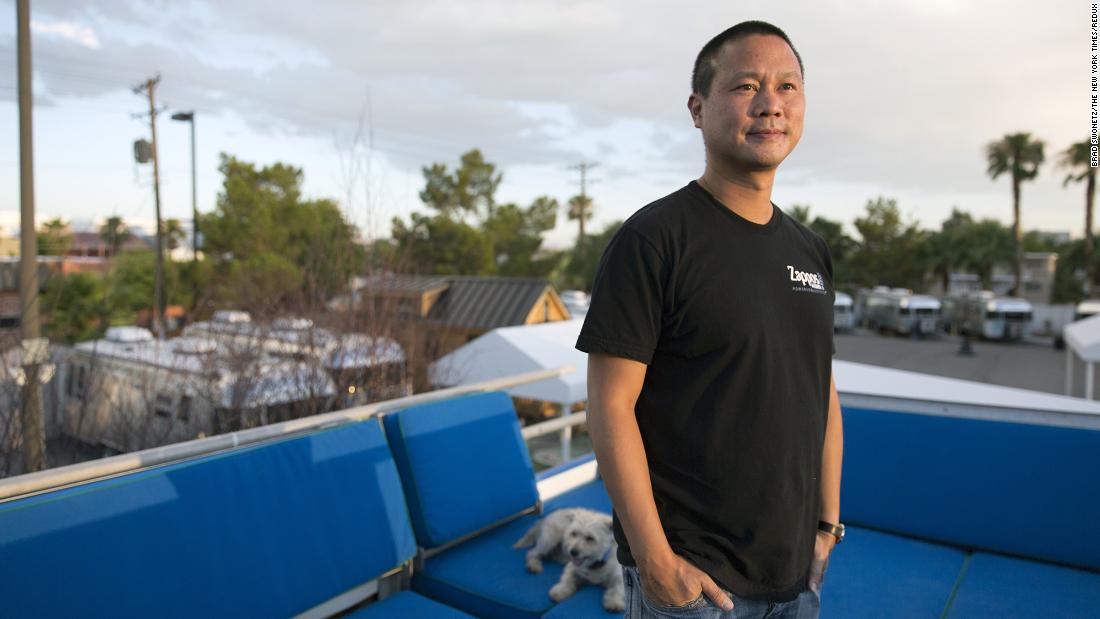 Police said they found “no criminal violations and/or aspects in association with” the November 18 fire.

Hsieh’s death was announced in late November by a spokesperson for DTP Companies, an enterprise for which he served as the visionary. The spokesperson at the time said Hsieh died peacefully and surrounded by family. Dozens of tributes poured in on social media following the news, some calling Hsieh a “brilliant entrepreneur” and others praising his kindness and generosity.

In an incident report, the New London Fire Department said that while the cause of the fire is “undetermined,” human factors such as alcohol and drug impairment may have contributed to the blaze.

According to witness accounts in police incident reports, Hsieh had gone outside to sleep in a shed that was attached to the house he was staying in, after having an argument with the homeowner, who some witnesses described as Hsieh’s girlfriend, others as a friend.

Hsieh’s brother, friends and employees were also at the house as they were scheduled to leave to the island of Maui, Hawaii, early in the morning, the police reports say.

According to one report, Hsieh “was taking everyone to Hawaii for a get away.”

Witnesses told police Hsieh was being checked on every 10 minutes.

Hsieh’s personal assistant told police that before the fire, they saw Hsieh laying down in the shed with a blanket on, adding Hsieh had candles and a propane heater lit to provide heat inside the shed, according to the police report. The assistant noticed the “blanket was almost touching the flame of the candle” and pointed the possible hazard out to Hsieh, and told Hsieh to put the candle out, the police report says. Hsieh put the candle out, according to the report.

Hsieh eventually “asked that he be checked on every 5 minutes instead,” which the group complied with, according to one incident report.

The same report says that during that first five-minute check, witnesses “discovered smoke coming from inside the shed and they could not get inside because it was locked from the inside.”

Witnesses told police they broke a window and attempted to extinguish the fire, according to the police reports.

Hsieh’s personal assistant told police Hsieh’s dog had recently died and Hsieh was “distraught.” The assistant added they had “never heard the victim make (any) suicidal or homicidal statements.”

Emergency services personnel arrived at the home around 3:30 a.m., according to police, where firefighters forced the shed’s door open and removed Hsieh. He was then transported to the hospital.

The police report says the fire department was notified of Hsieh’s death on November 27 and that, according to a medical examiner’s investigator, Hsieh had brain edema from the hot gases and soot from the fire and was placed on a ventilator. The family requested that he be extubated, the police report says.