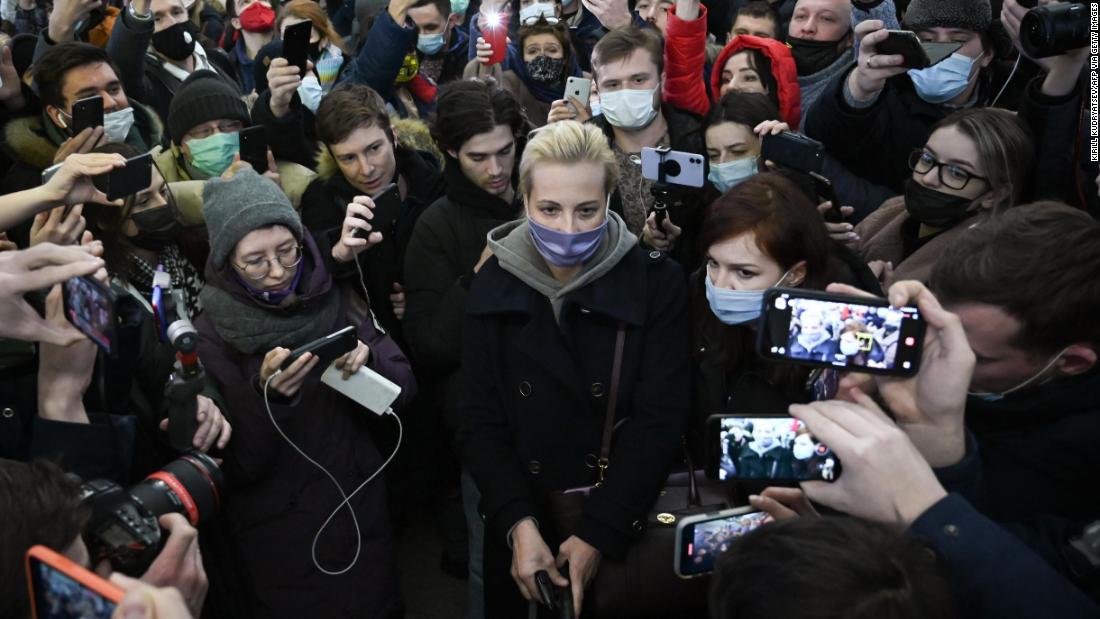 She was freed a few hours later, once riot police had dispersed the crowds. Nevertheless, the promptness with which Moscow police tracked her down and detained her speaks to the fears she and her husband spark in the Kremlin, as protests rage across Russia.

But in late August, her husband was poisoned with nerve agent Novichok. As he lay comatose in a clinic in Omsk, Navalnaya suddenly stepped into the center stage of a battle with the Russian state — and her image of a stoic, calm, and collected woman became a story in its own.

Russian independent media have since compared her to former US First Lady Michelle Obama, and supporters now wonder if she might lead the country’s opposition movement one day.

Navalnaya moved quickly to put public and international pressure on the Russian government after her husband was poisoned — and in doing so may have saved his life.

She held impromptu press conferences on the clinic’s doorstep telling journalists she believed her husband remained in grave danger while in Russia. Local doctors were refusing to let him be medically evacuated to Germany, likely due to pressure from Russia’s secret service, Navalnaya alleged.

“This is being done so that the traces of the chemical substance disappear from Alexey’s system,” she said, masking any emotion with black sunglasses. “He is not in a very good condition, we can’t trust this hospital, and we demand that he is given back to us.”

To further pressure the Kremlin, Navalnaya even went to the man her husband believes was behind the attack, the Russian President himself. She wrote directly to Vladimir Putin demanding that he allow her husband to leave the country.

Putin later said that he “immediately gave the order” to let Navalny go when he received Navalnaya’s letter. The Kremlin has repeatedly denied any involvement in the poisoning.

She and the comatose Navalny were soon flown to Berlin, along with some evidence gathered from his hotel room that would later be crucial in helping European labs identify Novichok, a military grade chemical weapon first developed by the Soviet Union.

“Yulia, you saved me,” Navalny wrote on Instagram, shortly after he regained consciousness at Berlin’s Charite Hospital, crediting her for his remarkable recovery.

The couple met shortly after Yulia, a Moscow native and the daughter of a scientist and an employee of the state consumer-goods ministry, graduated from Plekhanov University of Economics, where she studied international relations. She worked in a bank before leaving to care for their eldest daughter, Darya, who is now studying at Stanford University in the United States.

Returning from maternity leave, Navalnaya helped her parents-in-law sell furniture for a few years, but after her and Navalny’s son, Zakhar, was born — and with Navalny increasingly in the spotlight — she decided to focus solely on the family.

Before Navalny’s near-fatal poisoning, Navalnaya’s most famous public appearance dated back to 2013, when she spoke out to support his run for Moscow mayor.

“In Russia … we don’t see the politicians’ wives at protests, but politics storms into families’ lives whether you like it or not,” Navalnaya said from the stage where at a concert in her husband’s support, she described how members of her family had frequently found themselves the target of law enforcement due to Alexey’s activism.

In the over seven years since, politics has indeed caused her family a fair share of trouble. In 2014, Navalny was on the brink of getting a three and a half year-long prison sentence in an embezzlement case he believes was fabricated to bar him from running for public offices again. His brother Oleg was imprisoned, while Alexey got away with a suspended sentence following a court decision many viewed as a way for the authorities to avoid fueling public support for the Kremlin critic.

Navalny has spent weeks on end in detention centers after anti-government demonstrations and been physically attacked by radical groups. In 2017 Navalny was splashed in the face with an antiseptic green dye that damaged vision in one of his eyes.

Their family has also been under constant surveillance for years. According to a CNN-Bellingcat investigation, phone and travel records suggest members of a Russian intelligence team followed Navalny to at least 17 cities since 2017.

Navalnaya herself may have been poisoned while on a family vacation in Kaliningrad last year. Flight manifests obtained by the investigation show at least three members of FSB flew to the city at the same time, and security cameras at the hotel were turned off for the duration of their stay, a source told Bellingcat.

On July 6, hours after the FSB team returned to Moscow, she fell ill, experiencing what Navalny would later describe as sudden exhaustion and disorientation.

Yulia recovered, and the exact cause of her illness was not determined. But experts have told CNN that such symptoms are consistent with a low dosage of poisoning, and looking back, Navalny believes the symptoms were “absolutely the same” as those he would experience while recovering from his encounter with Novichok.

Navalnaya, at least in public, has often laughed off the hardships that her husband’s battle with the state has brought on the family.

“Everyone always wants me to say or hint that yes, I’d like it [for Alexey to stop what he is doing]. No. I support what he does, I say that sincerely,” she said in her first comprehensive on-camera interview, with the prominent Russian blogger and filmmaker Yury Dud, filmed after Navalny’s poisoning. “Dropping everything half-way, that’s just not cool.”

When their personal bank accounts were frozen last year as a result of an embezzlement case against Navalny’s Anti-Corruption Foundation, which he believes was also politically motivated, the family was forced to rely on cash for all purchases, she told Dud.

“I just learned that I’m a member of a criminal gang called ‘Navalny’s allies,’ and all of our funds have been frozen,” she wrote on Instagram at the time. “I’m furious. Why is Alexey Navalny the leader of the gang? Maybe I’m the criminal boss here, and he is just a supporter of mine.”
Navalnaya’s supporting role in her husband’s political career stands in stark contrast to the spouses of most Russian and Soviet leaders. Putin’s wife Lyudmila Putina was rarely seen in public and has faded into obscurity since they announced their divorce in 2013.
“Navalny never denies the exceptional role Yulia played in his life, and this is one of his strengths,” Novaya Gazeta reporter Vera Chelishcheva wrote after the paper named her one of its heroes of the year for 2020.

“He is not hiding his wife, he openly confesses his love to her, but is not showing off, he posts her photos on Instagram, protects her and does not hide that she is the one who saves him in life.”

Just over a week ago, the couple flew back to Russia after spending five months amid the idyllic landscapes of the German countryside — knowing full well that, once they landed back in Moscow, they ran the risk of being separated for years.

Before take-off, Yulia posted a humorous video on Instagram, repeating a line from a popular 90s Russian crime drama “Brother”: “Garçon, pour us some vodka, we are flying home.”

The video now became viral on TikTok among those calling for Navalny’s release. He was detained shortly after arriving at Moscow’s Sheremetyevo airport, where their plane had been diverted at the last minute.

As police prepared to escort Navalny away, Navalnaya gave her husband a hug and a kiss and stepped into the cold outside the airport to address a crowd of journalists and supporters: “[Alexey] is not afraid, I’m not afraid, and I urge you all not to be afraid either,” she said before being driven away to chants of her name.

Navalny’s daring return to Russia means he now risks spending years behind bars. As a result, many Russia watchers speculate that she could assume leadership of Russia’s opposition, comparing her to Belarus’ Svetlana Tikhanovskaya, who ran for president in her husband Sergei’s place, after the popular video-blogger and pro-democracy activist was jailed.

Alexander Lukashenko, who has ruled over Belarus since 1994, was declared the winner of the disputed election, and Tikhanovskaya was forced to flee the country. Nevertheless, she remains the face of mass protests against the strongman leader.

Some Russian tabloids have speculated that Navalnaya could also run for a seat in Russia’s parliament, the Duma, next fall. Similar rumors abounded before the Russian presidential elections in 2018, when Navalny was barred from running due to a past conviction.

Another presidential candidate, socialite Ksenia Sobchak recalled in an interview that she had suggested Yulia could run on his platform, but said that Navalny dismissed it, saying that “votes are not transferrable.”

Navalnaya has so far voiced no aspirations for political office. But pro-Kremlin outlets have already slammed her as a “project’ by Western “curators” intent on meddling in Russian politics — an echo of similar accusations against Navalny.

Her husband faces a court hearing next week that will determine their family’s future for what may be years to come. Navalnaya remains defiant, thanking supporters — who dubbed her “the First Lady” on Instagram — for risking arrest last weekend to protest for his release.

Hong Kong and Macao will fully reopen borders with mainland…