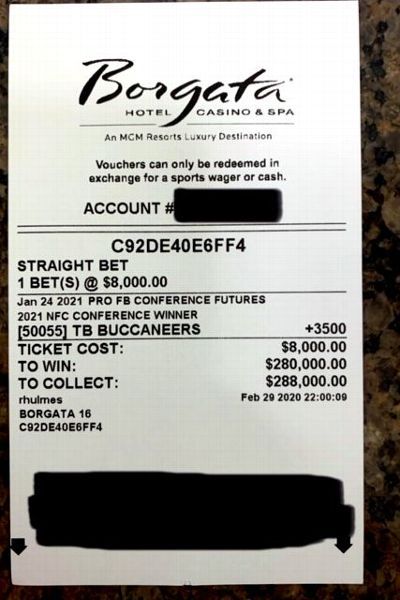 
Professional bettor Mark DeRosa was on a plane back from Atlantic City after last year’s Super Bowl when he got a clear picture of what would turn out to be one of the biggest scores of his career.

DeRosa believed Tom Brady was going to leave New England in the offseason and that Tampa Bay was one of the most likely landing spots. Sportsbooks, however, disagreed and listed the Buccaneers around 50-1 in their odds on where Brady would play in the 2020 season. Bookmakers made Brady returning to New England a heavy, odds-on favorite.

While in Atlantic City for the Super Bowl, DeRosa placed two $500 bets with DraftKings on Brady playing with the Buccaneers, at 50-1 and 40-1. Then, on the plane back to Florida, he decided he wanted to get down more on Tampa Bay to win the NFC and Super Bowl the following season. He would need to convince his old college friend and betting partner Zack White that the Bucs were a good bet.

Tampa Bay had just finished a 7-9 campaign in which quarterback Jameis Winston tossed 30 interceptions. It was the Buccaneers’ third consecutive losing season, and they were considered long shots again, with Super Bowl odds in the 65-1 range.

“He had to talk me into it quite a bit,” White, a respected bettor in Las Vegas, recalled. “His reasoning pretty much came down to Brady was going to go there.”

White asked DeRosa what he thought the chances of Brady landing in Tampa Bay were, “because if he doesn’t, then this bet is pretty much awful.”

DeRosa said he had a hunch, a well-reasoned one that was based on several signs indicating Brady was leaving New England. DeRosa remembered a 2018 ESPN story highlighting a rift between Brady, Patriots coach Bill Belichick and owner Robert Kraft. In August 2019, DeRosa read that Brady had put his Massachusetts mansion up for sale, and he thought it was meaningful that the six-time Super Bowl champion quarterback had let his contract run out for the first time in his career.

DeRosa believed that Tampa Bay — because of coach Bruce Arians’ displeasure with the turnover-prone Winston, a roster loaded with playmakers, warm weather and lack of state income taxes — was one of only a handful of fits for Brady.

“The worst-case scenario is you’ve got [Tampa Bay] 30-1 to win the NFC and 60-1 for the Super Bowl, and that’s just the market price,” DeRosa reasoned with White last February. “If it happens, they’re going to be like 5-1 and 10-1, and I really think it’s going to happen. I don’t think he’s coming back. I think he’s going somewhere else.”

White was convinced and went to work in Las Vegas, placing several thousand dollars on the Buccaneers to win the Super Bowl at 65-1 and 60-1. Meanwhile, back in Florida, DeRosa had been monitoring the odds at New Jersey sportsbooks and saw that the Borgata opened the Bucs at 35-1 to win the NFC. DeRosa immediately booked a flight back to Atlantic City and placed an $8,000 bet on Tampa Bay to win the conference at 35-1.

When DeRosa and White were done betting, they had around $20,000 invested in the Bucs at odds around 65-1 to win the Super Bowl and 35-1 to win the NFC. They each took smaller positions on a few teams, DeRosa on the Los Angeles Chargers and White on the Saints, but their largest investment was on the Bucs.

On March 20, Brady signed a two-year deal with the Buccaneers, whose Super Bowl odds improved dramatically at sportsbooks. When the season kicked off, Tampa Bay was around 10-1 to win the Super Bowl and 5-1 to win the NFC, just as DeRosa had anticipated.

Midway through the season, things didn’t look great for the Bucs. They lost three of four in November, including a 38-3 blowout loss to the Saints, to fall to 7-5.

“There was a little bit of frustration,” White said with a chuckle about Tampa Bay’s midseason swoon, “but it’s the NFL, man, you don’t count anyone out until the end.

“There was always so much value locked up in those big-money tickets. You could’ve locked up a lot of profit before the season even kicked off with the numbers we had.”

They each hedged a little bit of their risk by taking the Washington Football Team +9.5 in the divisional round of the playoffs against the Buccaneers. Tampa Bay won by eight. For the most part, though, they held tight and plan do the same for the Super Bowl. The Buccaneers are 3-point underdogs to the Kansas City Chiefs.

Both in their late 30s, DeRosa and White attended Appalachian State together and have been betting professionally for over a decade. They have already turned six-figure profits on the Bucs and are in position for the largest scores of their careers on any sport if Tampa Bay wins the Super Bowl.