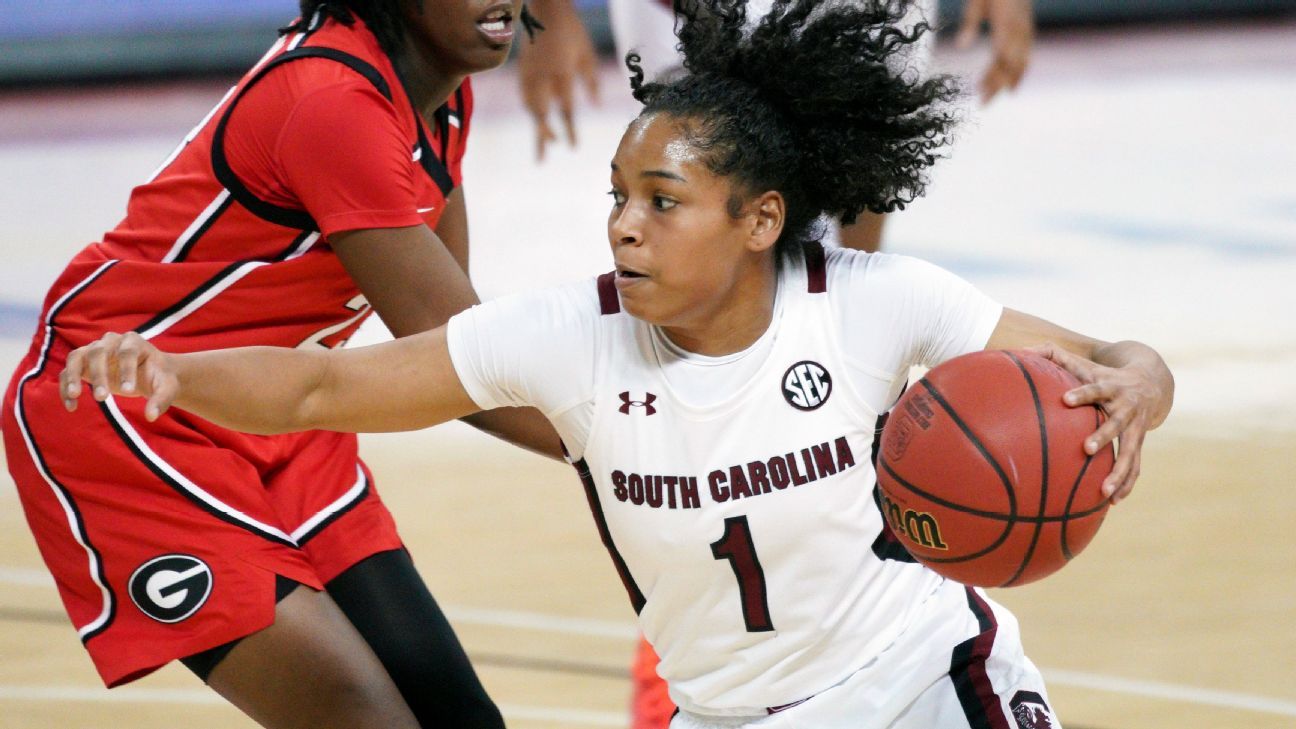 At halftime of Sunday’s game at LSU, South Carolina coach Dawn Staley’s mind was churning. Her Gamecocks trailed by just two points, but from pace to performance, she didn’t like what she had seen. In the locker room, she made strategic adjustments and needed full buy-in from the Gamecocks.

And after the 69-65 victory, Staley didn’t dwell on the narrow win. She focused on how her players reacted to a game that could have gotten away.

“Super proud of our team to be able to make those adjustments,” Staley said. “That means they’re growing up.”

That has been a requirement for the Gamecocks, who are led by the sophomore core of Aliyah Boston, Zia Cooke and Brea Beal after losing two starters who were WNBA first-round draft picks. Fourth-ranked South Carolina (12-1) is a projected No. 1 seed for the NCAA tournament and atop the SEC once again at 7-0 heading into Thursday’s game at No. 21 Mississippi State (ESPN/ESPN App, 7 p.m. ET). But the Gamecocks really are still growing.

“They’re not a team that flinches, even through mistakes,” Staley said. “They believe in themselves as a unit. I’m probably a lot tougher on them in games like this than they’re used to. But sometimes you’ve got to jolt people out of the funk they’re in, so they can see something a little bit different.”

It’s hard to connect funk to anything about a team that is 44-2 going back to the start of the 2019-20 season. Yet it’s consistent with what Staley has been saying all along: Sure, the Gamecocks are good. But she wants them to get national championship-caliber better. The pieces are there.

South Carolina went 32-1 and finished ranked No. 1 last season with Boston, a forward, and guards Cooke and Beal starting as freshmen. With point guard Tyasha Harris and forward Mikiah Herbert Harrigan gone to the WNBA, the sophomore trio has a lot on its shoulders, but also plenty of help. Juniors Destanni Henderson (guard) and Victaria Saxton (forward), senior forward LeLe Grissett and sophomore forward Laeticia Amihere all have moved into bigger roles.

The 6-foot-5 Boston already looks like a future WNBA franchise cornerstone, much like her Gamecocks predecessor A’ja Wilson. The early part of Boston’s season was pedestrian by her standards, but her numbers have surged since SEC play began. Her 28 points against Florida on New Year’s Eve doubled her best scoring output in nonconference play.

Last week, Boston averaged 20.7 points, 13.7 rebounds and 5.7 blocked shots in victories over Arkansas, Georgia and LSU. She had her second career triple-double in the Georgia game.

South Carolina’s @aa_boston wreaks havoc on the defensive end of the floor. How does she do it? Let’s go to the videotape. (Video magic courtesy of Mike Kataja.) pic.twitter.com/UC3A4BvdqD

Staley thinks the Gamecocks’ nonconference opponents put an emphasis on crowding Boston’s space. She had dealt with that to a degree as a freshman, but not as much.

“She wasn’t used to seeing all the traffic,” Staley said.

As a result, Boston has worked on making small adjustments with footwork and moves when she’s in the paint, but also utilizing a mid-range jumper and even the 3-pointer (she’s 7 of 23 from behind the arc). She’s ready every game for a big workload.

“I definitely think my conditioning has come a long way,” Boston said. “I’ve been really focusing on just being more dominant.”

Beal had a career-high 17 points at Vanderbilt on Jan. 14, then topped that with 22 against Arkansas on Jan. 18. Scoring hasn’t been the key measurement for Beal, a 6-1 multi-purpose guard, but she is averaging 9.1 PPG. Staley said her point production makes a major difference for the Gamecocks’ success.

“I’m learning a lot of things: It’s a game inside a game,” Beal said. “We hear that from Coach all the time. For myself, it’s easy to score when you’re doing defensive things, little things, rebounds and putbacks. You don’t have to score on one-on-ones and moves; you just get it as easy as you can.”

Things looked easy for Cooke for the opening part of the season, as she scored in double figures in the first eight games, averaging 18.8 PPG. But as defenses started keying on her, she went into a bit of a shooting slump. In the past two games, though, she’s back in double-digit scoring.

“People are scheming for her,” Staley said of Cooke, who is averaging a team-high 15.5 PPG. “They know when she touches the ball, a shot is going up in some kind of way. And it came to me against LSU: With the half-court stuff, she’s pressing. She’s taking the wrong angle to go about scoring. We’re showing her to go on a more direct-line drive.”

The Gamecocks’ versatility at guard allows them to move Henderson to the wing and have Cooke run the point, which was the big strategical adjustment Staley made at halftime in beating LSU.

Henderson showed flashes of brilliance as a sophomore, but she has come into her own this season. One of the fastest players in the country with the ball, Henderson is averaging 12.5 points and leads the Gamecocks in assists at 5.9 per game.

The Gamecocks’ lowest moment this season came Dec. 3 against NC State in a 54-46 home loss, which knocked South Carolina out of the No. 1 ranking for the first time since January 2020. The defeat — especially to a team that’s now projecting as a fellow No. 1 seed — wasn’t what bugged Staley the most.

The Gamecocks had played too casually, didn’t respond to what she was saying and seemed not to get it.

“I’d been telling them what I was concerned about before that game, but it didn’t penetrate,” Staley recalled. “I can handle losing; I can’t handle losing like we did. But it’s something that we needed.”

The loss turned out to be one of the best things to happen to South Carolina.

“They’ve been very coachable,” Staley said of the aftermath. “They listen, and they try to do what you want them to do. But then they lose some of that discipline, because we don’t have anybody on the floor that can reinforce it, because we’re so young. We as a coaching staff have to be those leaders.”

Staley is hopeful more of that leadership will come from players that she says right now are probably too nice to each other when they need to be stern. But that’s part of growing up, too.

The Gamecocks have defeated three of the other six ranked teams in the SEC, with three more on the horizon. Next is Mississippi State, where former South Carolina assistant Nikki McCray-Penson, Staley’s longtime friend and former USA Basketball teammate, is head coach. After spending the last three seasons at Old Dominion, McCray-Penson took over for Vic Schaefer, who left for Texas.

South Carolina-Mississippi State has become one of the SEC’s top rivalries, even though the Bulldogs haven’t had much recent success against the Gamecocks. Over the last 10 years, South Carolina is 14-3 in the series, including the 2017 national championship game victory.

McCray-Penson was on the Gamecocks’ sideline for that. Now she’ll be trying to hand South Carolina its first regular-season conference loss since March 3, 2019, when the Gamecocks fell to Mississippi State. (They also lost to Arkansas in the SEC tournament five days later.)

“But I look forward to hearing her scream and screech and do all those things that used to hit my right ear for nine years. But now they mean the direct opposite. They’re trying to beat our butts.”

South Carolina plays UConn in Storrs, Connecticut, on Feb. 9. The Gamecocks beat the Huskies last season for the first time.

“I personally enjoy it, because Connecticut has been so good for so long,” Staley said of facing the Huskies. “If you’re lucky enough to get to the Final Four, it helps to have played them before. I think it’s great for women’s basketball, and it’s great for them. And it will help us.”

Pentagon won’t commit to Afghanistan troop withdrawal by May, says Taliban are not honoring commitments to US