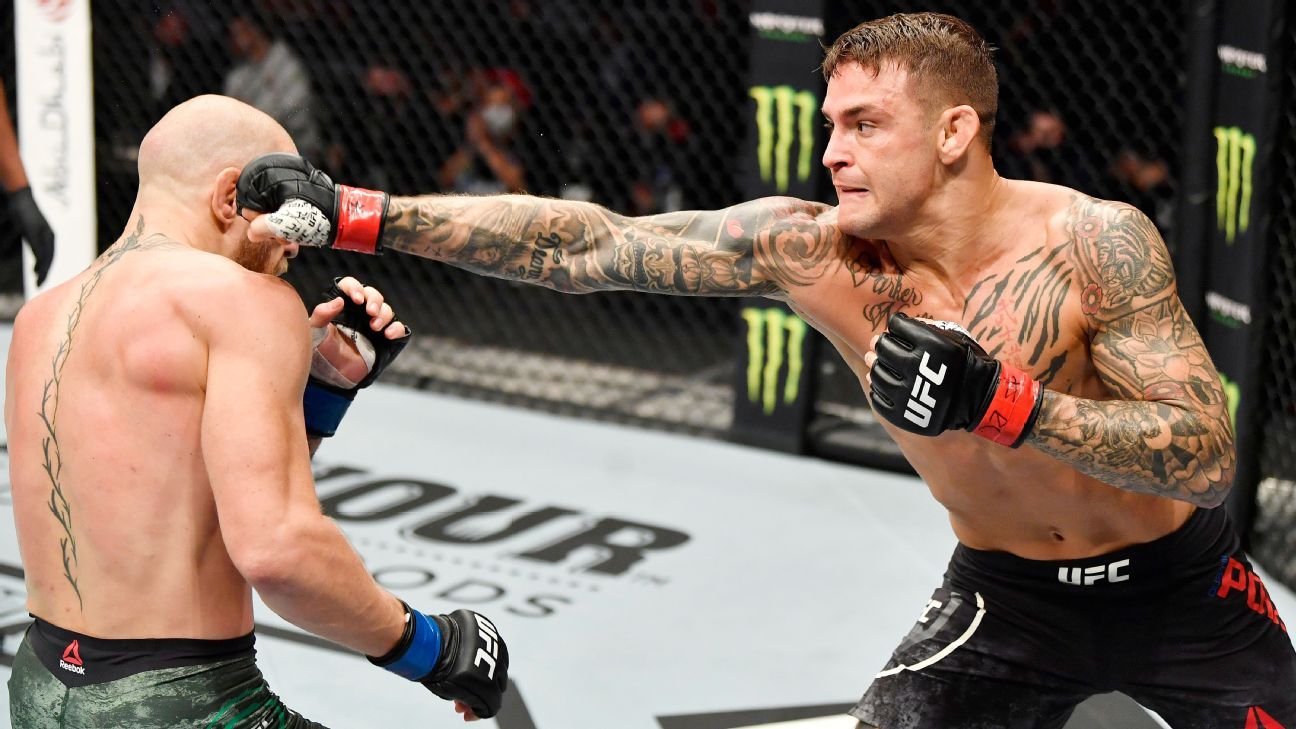 
A pretty good indication that a UFC fighter is hot is when Conor McGregor is calling him out, rather than the other way around. And when Nate Diaz, who rarely calls out anyone, joins the chorus, the heat is undeniable.

That’s the position Dustin Poirier finds himself in after his second-round TKO of McGregor in the main event of UFC 257 on “Fight Island” last weekend. McGregor’s camp is calling for a trilogy bout after the fighters split the first two — 6½ years apart — and Diaz is looking to finally get in the Octagon with Poirier after their scheduled bout in 2018 fell apart.

The UFC returns to action on Feb. 6 at the UFC Apex, as Alistair Overeem (ESPN’s No. 6 ranked heavyweight) and Alexander Volkov (No. 7) battle in an opportunity to improve their standing in the heavyweight division. Overeem has won four of his last five, while Volkov is coming off an October win over Walt Harris.

The reason so many fighters, including Charles Oliveira, are jockeying for position is Poirier’s next fight is expected to be for the lightweight championship.

Regardless of whom he fights next and what’s at stake, one thing for certain is Poirier has earned his spot in ESPN’s MMA Hot List, which is based on a fighter’s performance over the past six months.

The 13-member panel — names are below — considered quality of win as well as quantity since July 28, 2020. Several fighters have multiple victories, but were they as impressive as another fighter’s singular moment?

In the case of our No. 1, the moment prevailed.

Last six months: Stopped Conor McGregor in the second round on Saturday

McGregor won the first round on all three scorecards, but Poirier’s strategy of attacking McGregor’s lower right (lead) leg would prove decisive. He followed a calf kick in the second round with solid punching combinations to put McGregor away.

Now the big question is: Who’s next for Poirier? UFC president Dana White said he could see a Poirier vs. Michael Chandler matchup for the belt, assuming Khabib Nurmagomedov’s retirement becomes official and the title becomes vacant.

Last six months: Stopped Paulo Costa in the second round on Sept. 26

If Adesanya wins his next bout, he’ll no doubt be atop this list next time. On March 6, Adesanya will attempt to become a double champ when he challenges light heavyweight titlist Jan Blachowicz.

His domination of Costa in UFC 253 proved it’s going to take more than brute force to put the first blemish on Adesanya’s record, which stands at 20-0. Will Blachowicz be the one?

Last six months: Submitted Justin Gaethje in the second round on Oct. 24

As long as Nurmagomedov is listed as the champ, he’s considered an active fighter. Heading into UFC 257, White said a spectacular performance by a headliner or maybe Chandler might lure Nurmagomedov out of retirement. But there’s no indication that’s going to happen.

So the next step for one of the all-time greatest MMA fighters is likely to vacate his title and focus on his many other interests.

Holloway didn’t just snap a two-fight losing skid — he turned in perhaps the most impressive win of his illustrious career, and it just happened to take place on network television. The former featherweight champion didn’t get a finish only because of Kattar’s incredible fortitude, although many — including White — thought the fight should have been stopped after the fourth round.

Holloway’s next fight almost assuredly will be against the winner of next month’s Brian Ortega-Alexander Volkanovski featherweight title bout. Volkanovski has beaten Holloway twice, although both fights were very close, and many thought Holloway deserved the decision in the second meeting. Holloway dominated Ortega in their 2018 meeting, a successful featherweight title defense. There’s also some speculation about Holloway moving up to lightweight. McGregor also mentioned a rematch at some point.

Last six months: Draw vs. Brandon Moreno on Dec. 12; submitted Alex Perez in the first round on Nov. 21

Beating Moreno was an impressive feat in itself, but considering how sick Figueiredo was in the 24 hours before the fight, it’s amazing he was able to fight at all. Figueiredo had to go to the hospital the night before, and his manager thought the fight was going to be called off. It turned out to be one of the best of the year.

The rematch is expected to be this spring.

Chandler made a huge UFC debut in the co-main event of UFC 257 when he battered Hooker. He then did a backflip off the top of the Octagon and called out McGregor and Nurmagomedov. Doesn’t get much better than that.

If he doesn’t fight for the title in his next bout, he’s likely one win away.

Holland enjoyed an incredible 2020 as he became the first UFC middleweight to win five bouts in a calendar year. Four of those wins were by stoppage.

He is No. 10 in the UFC’s middleweight rankings, and another win should get him in ESPN’s top 10; he’ll face No. 9 Derek Brunson on March 20.

Let’s clash for this crown. Winner takes all, and becomes the King of Lightweight division https://t.co/fGJd6OlvIX

Oliveira is riding an eight-fight win streak and is angling for a title fight against Poirier. He deserves it.

But star power can factor into title shots, which may help Chandler, and even McGregor after a loss, more than Oliveira. Justin Gaethje said Oliveira is the toughest out in the division.

If Oliveira is on this list the next time, it could mean he has a belt.

A date finally has been set for Miocic’s next title defense, as he’ll face Francis Ngannou on March 27 in a rematch of their 2018 bout, which Miocic won by unanimous decision.

Miocic is the greatest heavyweight in the history of the UFC, and perhaps in all of MMA. But Ngannou is on a streak of four consecutive first-round KOs, and many are expecting him to become the new champ. Miocic has been counted out before, however, only to persevere.

Last six months: Stopped Dominick Reyes in the second round on Sept. 26

If Blachowicz is on this list the next time, it means he will have handed Adesanya his first loss, as the two will fight for Blachowicz’s title on March 6.

Blachowicz will be an underdog, but that’s what he was when he faced Reyes for the vacant title last fall. He’s proved he should not be overlooked.

What if China no longer needs Hollywood? That’s bad news for the film industry