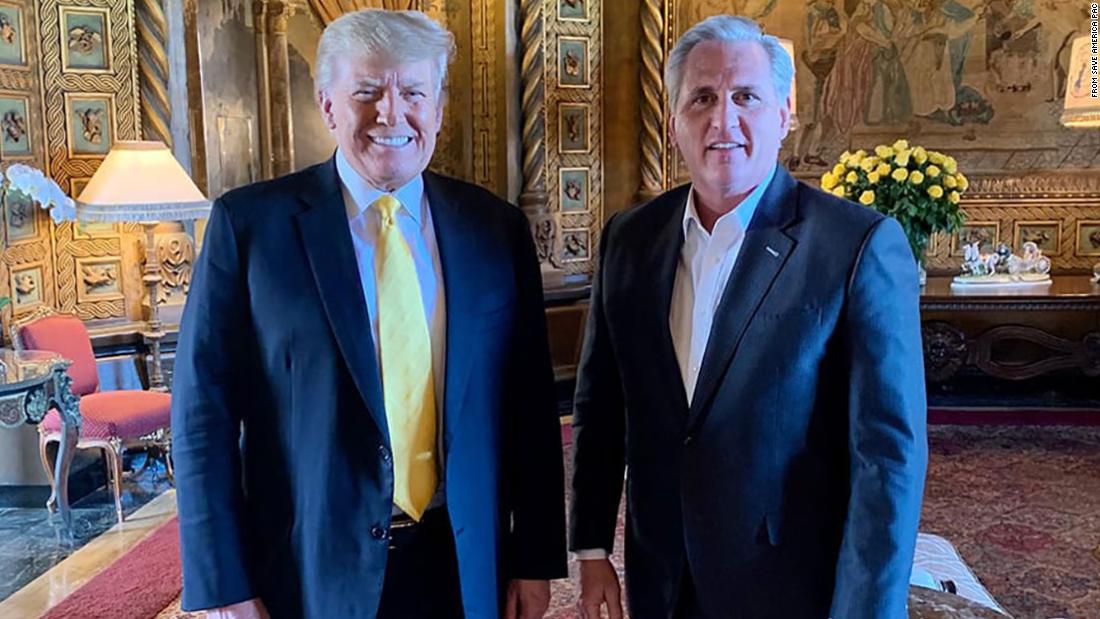 “They discussed many topics, number one of which was taking back the House in 2022,” the statement read. “President Trump’s popularity has never been stronger than it is today, and his endorsement means more than perhaps any endorsement at any time.”

McCarthy’s visit comes at a tumultuous time for the Republican Party, following Trump’s role ahead of the January 6 deadly riot storming the Capitol that led to his second impeachment just days before he left office. Ten House Republicans voted to impeach Trump and the Senate is expected to pick up the former President’s trial next month. Still, all but five Republican senators voted earlier this week that such a trial was not constitutional, outlining just some of the divides in the party, as Democrats now control the legislative and executive branches.

McCarthy released his own statement confirming Trump’s account of the meeting, showing he’s in lock-step with the former President.

“Today, President Trump committed to helping elect Republicans in the House and Senate in 2022,” McCarthy said. “A Republican majority will listen to our fellow Americans and solve the challenges facing our nation. Democrats, on the other hand, have only put forward an agenda that divides us — such as impeaching a President who is now a private citizen and destroying blue-collar energy jobs. For the sake of our country, the radical Democrat agenda must be stopped.”

He added, “A united conservative movement will strengthen the bonds of our citizens and uphold the freedoms our country was founded on.”

McCarthy was also in Florida fundraising as the House is out this week.

Despite political pressure from some in the GOP that the party must move on from Trump, McCarthy is eyeing what will win him back the House and possibly catapult him to the speakership.

CNN reported earlier Thursday that two sources told CNN that some people warned McCarthy not to go see Trump. A source familiar with the matter said it made McCarthy look weak. Another source close to McCarthy told CNN that the California Republican was told that he would look like he was “crawling back to Trump,” and that it would further isolate him from mainstream donors who want to move away from Trump.

Since the early days of Trump’s campaign, McCarthy stood by him, earning the nickname “my Kevin.” Even in the last days of Trump’s time as president, McCarthy joined a Texas lawsuit that was struck down by the Supreme Court that sought to overturn the results of the election. Even after the insurrection at the Capitol on January 6, McCarthy voted to object to the election results.

Politically, sources have told CNN that McCarthy is caught between Trump’s fervent supporters in the party and the GOP conference members who think the attack on the Capitol was sedition, including the 10 House Republicans — such as GOP conference chair Liz Cheney of Wyoming — who voted to support Trump’s second impeachment.

The fallout has led to questions about McCarthy’s leadership in his conference. As much as McCarthy cannot afford to lose support from members of the Freedom Caucus, he also can’t lose the backing of members in front-line districts that could help him win back the majority.

McCarthy has backtracked on Trump’s role in the insurrection as recently as this week, when he was criticized at his most recent news conference for saying he didn’t believe Trump “provoked” the insurrection “if you listen to what he said at the rally” — after saying two weeks earlier that Trump bears responsibility.

This story has been updated with additional developments Thursday.