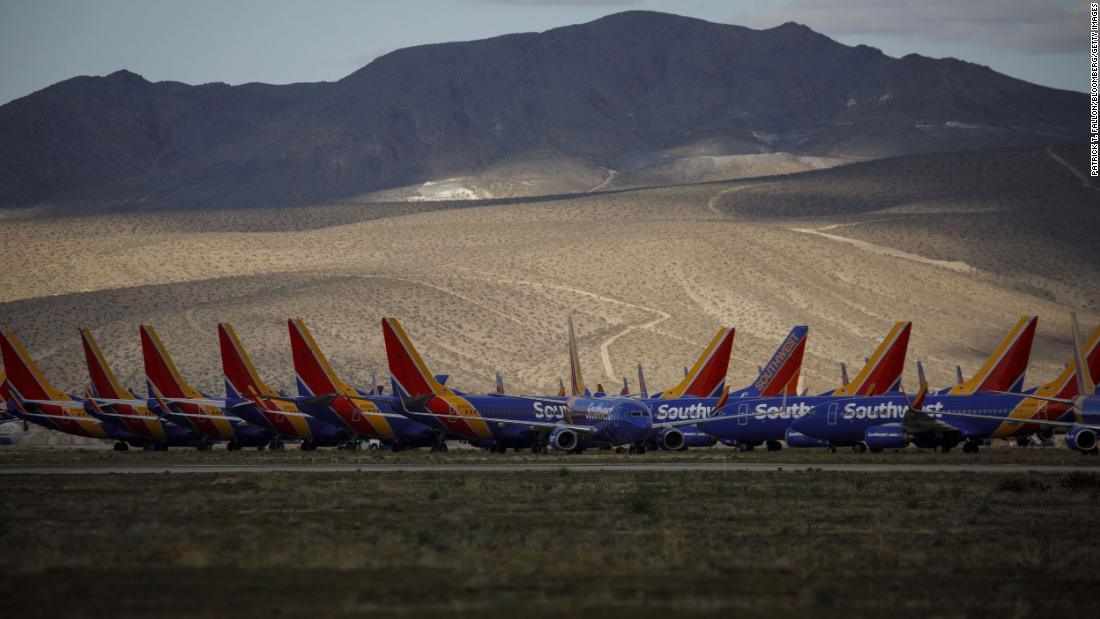 Since then, it has grown to become the nation’s fourth largest airline, reporting 47 consecutive profitable years while its largest rivals flew into and out of bankruptcy during the ups and downs of the difficult airline industry.

Until Thursday, that is.

Southwest (LUV) reported it lost a record $3.5 billion in 2020, excluding special items, as the Covid-19 pandemic brought airline traffic to a near halt and it was forced to ground many of its jets due to lack of business. Revenue for the year plunged $13.4 billion, or 60% to $9 billion for the year.

The losses were not unique to Southwest: They have been universal across major airlines across the globe.

American Airlines (AAL), the world’s largest airline by some measures, also posted an even bigger record annual loss of $9.6 billion, excluding special items, on Thursday. Revenue tumbled 62% to $17.3 billion.
And JetBlue (JBLU) reported a record annual loss as well, losing $1.6 billion for the year excluding special items — compared to a profit of $568 million on that basis a year ago.
United (UAL) and Delta (DAL) had already posted their own losses, with Delta going from record profits to a record loss in only one year.
All told, the nation’s six largest airlines — American, Delta, United, Southwest, JetBlue and Alaska Air (ALK) — lost $30.4 billion in 2020, excluding special items, compared to a combined profit of $13.8 billion a year earlier in one of the most profitable year on record for the US industry.
And the 2020 losses came despite $50 billion in government help for the airlines industry approved in March to help it weather the storm.

American Airlines’ loss was a bit smaller than what analysts expected, and its revenue was slightly stronger than forecast as well. But the stock took off like a rocket in premarket trading, rising as much as 87% ahead of the open before settling down to a 28% gain in the first minutes of the regular trading session. By late morning shares were only up 11%.

The stock was being talked up on Reddit by some who hoped to drive up the price and put a squeeze on investors who bet against it by shorting it.

“AAL flying to moon?” wrote one investor. “Let’s see if we are going to get some tasty juice out of a squeeze.”

Those investors have recently driven up the price of shares of GameStop (GME), another troubled money losing company.

American CEO Doug Parker declined to comment on the stock move in his call with analysts and media Thursday: “As a rule, we don’t speculate on the day-to-day movements of our share price. We’ll stick to that rule today.”

Parker did say that he’s convinced 2021 will be a year of recovery for the airline industry.

“There’s still a lot of unknowns, of course, when or how quickly demand will return. Make no mistake, it will return,” he said. And because of difficult decisions to cut costs and reduce staff, “when the recovery does occur, we’ll be prepared in even better positioned than we were prior to pandemic,” Parker said.

American did warn that it expects pre-tax earnings to be lower in the first quarter than at the end of last year if excluding special items, such as a new round of federal assistance for the airlines.

“As we look to the first quarter, there continues to be a tremendous amount of uncertainty with bookings. Stubbornly high COVID-19 cases and more stringent travel restrictions continued to constrain demand,” said CFO Derek Kerr.

The first quarter it traditionally a slow time for travel, and the combination of that trend and high Covid cases is pushing US air travel to a six-month low. The Transportation Security Administration reported that 469,000 people were screened at US airports on Tuesday, the first time it had fallen below the half-million mark since early July.

But Parker is hopeful that when demand for travel returns, it will come back quickly, even though it is difficult to know when that will be.

“I’ve got 10 straight months of data saying that people are ready to travel in six months. It keeps saying the same thing,” he said in an interview on CNBC Thursday. “What I do believe is that once people are comfortable, it will come back relatively quickly. There is huge pent-up demand to travel. We hear it everywhere we go. But no one is going to travel until there are things to do when you travel, and until the vaccine is distributed and the pandemic is largely eradicated.”

Airlines’ problems are expected to continue for at least the first half of this year, as analysts are forecasting losses in at least the first two quarters of 2021 for all major US carriers. They expect full-year losses for each of them, as well.

Although the Covid-19 vaccine could soon unleash some pent-up demand for air travel, that isn’t expected to happen until the late summer or early fall, at best.