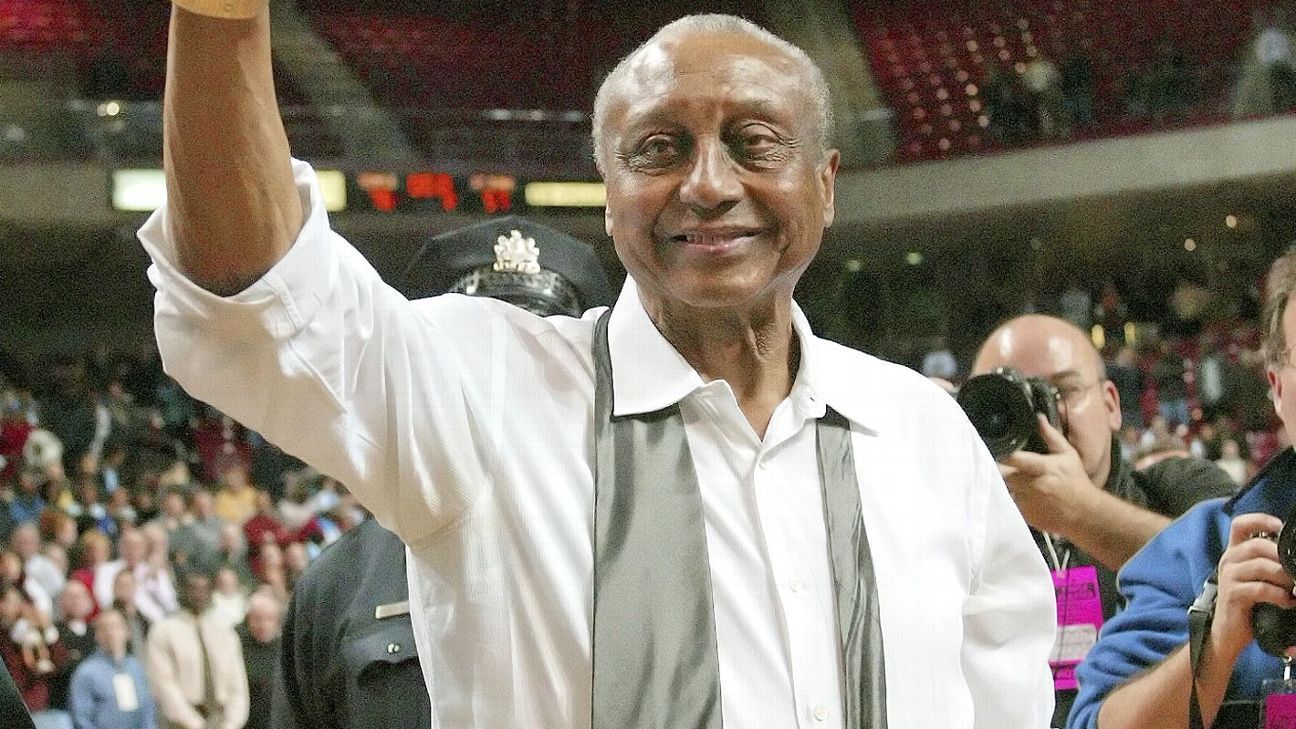 
Hall of Fame basketball coach John Chaney, a zone defense innovator who led Temple to 17 NCAA tournament appearances, has died at the age of 89.

The university said he died after a short, unspecified illness.

Chaney spent 24 seasons at Temple, beginning in 1982-83 — the only season his Owls failed to reach the NCAA tournament or NIT. He went to the Elite Eight on five occasions, and Temple was ranked No. 1 for a stretch during the 1987-88 season, when the Owls finished 32-2 and went 18-0 in Atlantic 10 play.

Before taking over at Temple, Chaney spent 10 seasons at Cheyney State, a Division II program about 30 miles outside Philadelphia. He went to eight Division II tournaments and won the national championship in 1978.

“John Chaney was a great coach, but he was so much more. For generations of Temple University students, he was a wise counselor, a dedicated teacher, an icon of success, and a passionate leader who always led by example and with conviction,” Temple president Richard M. Englert said in a statement. “I am also honored to say he was a dear friend.

Chaney won the Henry Iba Award, given to the Coach of the Year by the United States Basketball Writers Association, back-to-back in 1987 and 1988.

“Many of my players came from environments where people said they couldn’t do it,” Chaney told The Athletic in 2019. “I came from an era where it could end before being fulfilled. You have to move into a better place, in our minds and for our future. So many of them were able to change who they were. They ended up being what Temple’s statement has always been. Young acres of diamonds, right from the neighborhood, being told they could have the same kind of opportunity as everyone else.”

Our hearts are broken. Rest in Peace, Coach. pic.twitter.com/RwtbbvG40H

On the court, Chaney was known for his matchup zone defense, a strategy that confounded opponents for decades and annually had Temple among the leaders in scoring defense.

“If a team has never faced a Temple zone, it’s really difficult to see and have a proper attack for it the first time, because you don’t know what defense is on,” former Temple guard Quincy Wadley told The New York Times in 2001. “You think it’s one defense the entire time, but it’s not. It’s several different defenses that we play.”

Chaney, who was born Jan. 21, 1932, in Jacksonville, Florida, was a passionate coach on the sideline who had his share of incidents with opponents.

“I’m capable of being anything,” Chaney told Sports Illustrated in 1994. “… I’m a person who can be out of control. Sometimes it’s better to be crazy than intelligent.”

Midway through Chaney’s tenure at Temple, he had a budding intraconference rivalry with UMass and its coach at the time, John Calipari. After a 1994 game that Temple lost 56-55, Chaney became upset with the way Calipari treated the officials and interrupted Calipari’s postgame news conference.

“Could I say this to you, please?” Chaney said, according to The New York Times. “You’ve got a good ballclub. But what you did with the officials out there is wrong, and I don’t want to be a party to that. You understand?”

“You weren’t out there, Coach,” Calipari responded. “You don’t have any idea.”

After a few more back-and-forths, Chaney approached the podium and Calipari moved to confront Chaney.

Chaney was suspended for one game by Temple and apologized a couple of days later. The two coaches later became friends.

Coach Chaney and I fought every game we competed – as everyone knows, sometimes literally – but in the end he was my friend. Throughout my career, we would talk about basketball and life. I will miss those talks and I will my friend. Rest in peace, Coach! pic.twitter.com/0JGcQ7JPOO

In 2005, Chaney was suspended after sending in a “goon” during a game against Saint Joseph’s. He was upset the Hawks were setting what he considered illegal screens without fouls being called and subbed in Nehemiah Ingram, a 250-pound big man who later was a walk-on for the Temple football team.

According to Philadelphia Magazine, Chaney said the day before the game that he planned to send in “one of my goons and have him run through one of those guys and chop him in the neck or something.”

Ingram was called for five fouls in four minutes.

“I’m sending a message,” Chaney said after the game. “And I’m going to send in what we used to do years ago — send in the goons. That’s what I’m going to do.”

After Saint Joseph’s forward John Bryant was diagnosed with a broken arm from one of Ingram’s fouls, Temple suspended Chaney for the rest of the regular season. The coach apologized to Bryant and reportedly offered to pay for his medical bills.

“John Chaney was more than just a Hall of Fame basketball coach. He was a Hall of Famer in life,” Fran Dunphy, Chaney’s successor after his retirement in 2006, said in a statement. “He touched countless lives, including my own. I will miss him dearly and my thoughts and prayers go out to his family during this difficult time.”

Off the court, Chaney was a staunch advocate of helping poor adolescents better their lives through education.

“What entity has the right to play God?” Chaney asked in the 1994 Sports Illustrated profile. “You tellin’ me the NCAA can decide who lives and who dies among Black folks? Education is food, it’s heat, it’s shelter! Who has the right to deprive anyone of that? I come from the earth! I know what I’m talkin’ about! What choice are we givin’ the kids who fail that SAT test? One choice! Back to the streets … to a slow-legged death.”

Current Temple men’s basketball coach Aaron McKie played for Chaney from 1991 to 1994 and spoke glowingly of his former coach.

“Coach Chaney was like a father to me,” McKie said in a statement. “He taught not just me, but all of his players more than just how to succeed in basketball. He taught us life lessons to make us better individuals off the court. I owe so much to him. He made me the man I am today.”

In 2019, Chaney told The Athletic he wanted to be “remembered as someone who cared.”

“What we need more of these days — I don’t care how you look at it — is caring for others, whoever that is,” Chaney said.

A 2nd grader at a Christian school was expelled for telling another girl she had a crush on her, mother says